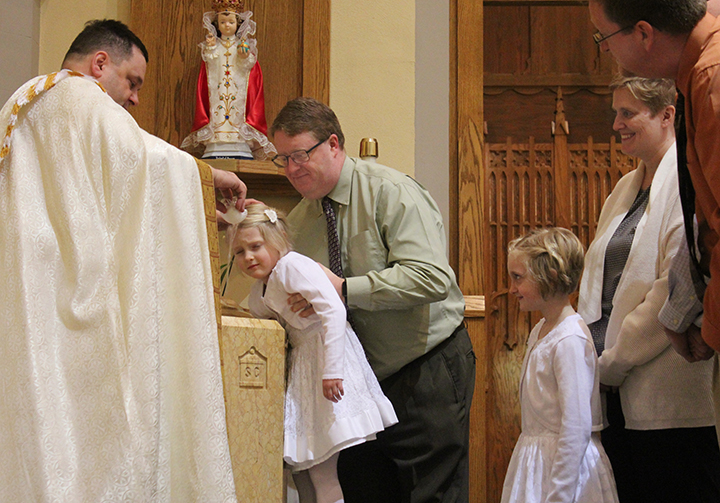 With help from her godfather, Craig Doran, Linda MacDonald, 5, is lifted over the baptismal font at Holy Cross Church in Mendota so Father Peter Pilon, pastor, can pour water on her head. Looking on his her sister, Kaylee, 6, who would be baptized next. (The Catholic Post/Jennifer Willems)

MENDOTA — Surrounded by their community of faith at Holy Cross School, Kaylee and Linda MacDonald were baptized after an all-school Mass during Catholic Schools Week.

The timing may have been coincidental, but still offered a lesson on the importance of Catholic schools, according to their pastor.

Being students in a Catholic school helped them to prepare for the sacrament, said Father Peter Pilon, and would continue to nurture their faith as children of God.

“Kaylee is in first grade — she’s just starting out,” he said. “Linda is in pre-school and will pick up as much as she is able. It’s an ongoing thing. . . . It’s all part of what it means to be in a Catholic school.”

The girls’ father, Eric MacDonald, knows well what Holy Cross has to offer. 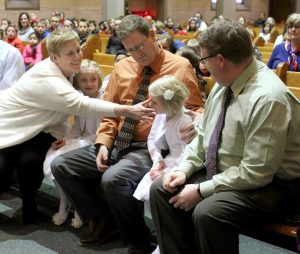 Heather Weltin, a family friend and Christian witness to the baptisms of Kaylee and Linda MacDonald, traces the sign of the cross on Linda’s head. (The Catholic Post/Jennifer Willems)

A 1989 graduate of the school, he traveled with the Air Force for 22 years. After retiring, he returned to the Mendota area and wanted for Kaylee and Linda what he had received.

“The school has just been open arms the whole time,” he told The Catholic Post. “It’s been a good experience, especially for the girls. . . . They’ve made some good friends.”

MacDonald said he wanted their baptisms to take place after a school Mass, which is usually celebrated on Wednesday mornings, so Kaylee’s classmates could be involved, too. Everything came together on Feb. 1.

He made it a special day for the first-graders, as well as Kaylee and Linda, by treating them to breakfast pizza after Mass.

They weren’t the only ones to stay for the baptism, however. In the end, all of the students from kindergarten through sixth grade witnessed the celebration. For some, like the second- and third-graders, it was an opportunity to learn a little bit more about the sacraments they have been studying.

“A lot of these kids know baptism, but they’ve never seen it. Or, if they’ve seen it, it was probably for a younger brother or a younger sister, but they were too young to remember it,” MacDonald said. “This gives them a better understanding of things.”

EDITOR’S NOTE: More photos from the baptism will be posted to The Catholic Post’s site on Facebook.