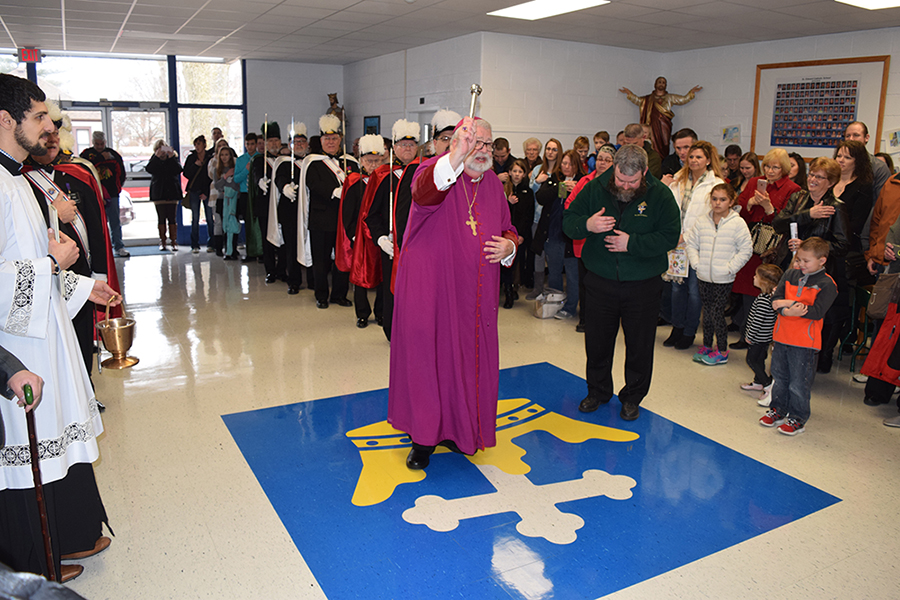 Bishop Jenky blesses the newly restored St. Edward School in Chillicothe during a ceremony in its foyer on Jan. 29. Making the sign of the cross to his left is Father Keith Walder, pastor. (The Catholic Post/Tom Dermody)

CHILLICOTHE — A fundraising summer snowball that came to be known as the “Miracle in Chillicothe” was joyfully celebrated Jan. 29 with the blessing of a newly restored and reopened St. Edward School.

“This small parish, this small school, this small town pulled together,” said Bishop Daniel R. Jenky, CSC, who joined the St. Edward faith community for Sunday Mass and presided at re-dedication ceremonies that followed in the school foyer. 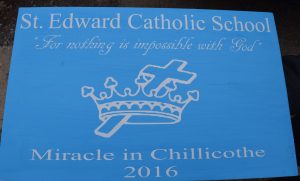 St. Edward School students presented Bishop Jenky with this plaque to thank him for his support and guidance and to remember Sunday’s day of celebration in Chillicothe. (The Catholic Post/Tom Dermody)

“You folks were filled with faith,” added Bishop Jenky, acknowledging their faith was greater than his when word came in late July that extensive repairs necessitated by a leaking school roof would require a $600,000 fix.  A process was begun to close the school, which had been set to reopen in a matter of weeks.

“But you were not going to let that external thing of a falling roof stop you from having Catholic education in Chillicothe,” said Bishop Jenky in saluting all who sacrificed to raise $400,000 cash-in-hand in a matter of days to save the school.

Six months later, with the sparkling clean 56-year-old building again hosting students and teachers after they had spent the first half of the school year in classrooms offered by the Chillicothe Bible Church, the donated amount has swelled to nearly $600,000. And checks are still coming in, according to Father Keith Walder, pastor.

“We’ve received donations and prayer support from Hawaii all the way to Connecticut,” he told The Catholic Post.

Sunday’s celebration, which included a reception in the school gym, provided a joy-filled start to Catholic Schools Week at St. Edward. 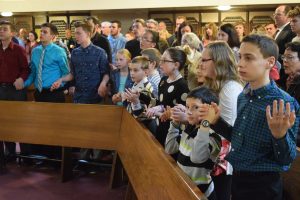 St. Edward Catholic School students who served as lectors or petition readers at Sunday’s Mass join in the Our Father. (The Catholic Post/Tom Dermody)

“What a glorious day!” said Mike Domico, principal, in comments at the end of Mass. In expressing “heartfelt thanks” to school alumni, parishioners, Bishop Jenky, the diocesan Office of Catholic Schools, and the entire community for support, he called it “a special day for us and a new chapter for St. Edward’s.”

The assembly broke into applause when Domico thanked Pastor Joe Horn and the congregation of Chillicothe Bible Church for providing their North School for classroom space while repairs were made to St. Edward. The six-month effort included replacement of the roof, asbestos abatement, and the installation of new ceilings, lighting, and electrical wiring.

“What a great, great man for helping us out,” said Domico of Pastor Horn.

“GOD HAS GREAT THINGS PLANNED FOR US”

Among those taking particular satisfaction in Sunday’s ceremonies were two people whose efforts during the hectic days of late July were key to saving the school.

“I truly believed this community could do it, and they did. It’s a miracle,” said Michelle Kluge, who is in her 20th year as a teacher at St. Edward. Her daughter, Ashley, also teaches at the school. 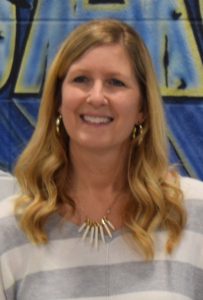 Both thought they would lose their jobs and the parish would lose a treasured asset when word of the school’s imminent closing came in late summer. But Michelle Kluge, who takes part in the annual St. Jude Run that raises funds for children with cancer, knew the community’s reputation for generosity.

She told Dr. Sharon Weiss, diocesan superintendent of schools, that Chillicothe contributes more than $300,000 annually through the St. Jude Run.

The diocese would soon propose that, if the parish could raise $400,000 in cash in one week, repairs could begin and the school would continue.

When Michelle Kluge turned to Facebook to begin spreading the word, she discovered that a 19-year-old parishioner, Gino Grivetti, had already established a GoFundMe website and that $50,000 had been pledged.

“I started crying and laughing at the same time,” Kluge recalled.

Grivetti, now a sophomore at Quincy University, made the three-hour trip home to share in the celebration. 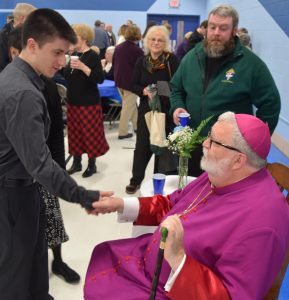 Bishop Jenky shakes the hand of Gino Grivetti, a sophomore at Quincy University and St. Edward School alumnus who opened the GoFundMe website that kept the parish informed of progress toward its fundraising goal and who recruited donations both in person and via social media. (The Catholic Post/Tom Dermody)

In addition to setting up the funding site, the St. Edward alumnus and 2015 graduate of Peoria Notre Dame made personal appeals, including 100 phone calls and tracking down people after weekend Masses.

“They were the critical ones, going out on a limb and taking a leap of faith in pledging money for a cause they weren’t sure about,” said Grivetti.

One check that came in was made payable to the “Miracle in Chillicothe,” recalled Kluge. The name stuck. The phrase now appears on a bulletin board in the school foyer and is emblazoned on a plaque and t-shirt presented to Bishop Jenky that also include the Scripture verse “For nothing is impossible with God.”

“I truly believe God has great things planned for us,” said Kluge. “He moved people to give that money.”

The school will not forget that generosity, assured Principal Domico.

“PART OF OUR HISTORY FOREVER”

At an assembly and ribbon cutting ceremony when the students returned on Jan. 23, Domico said “this is something that will be part of our history forever. Be thankful for it.”

Father Walder asked prayers for those who gave their support, and there were plenty offered on Sunday.

“It’s wonderful to see the excitement and the smiles on the kids’ faces and the teachers as well,” said Father Walder as the parish celebrated at the reception. “It warms your heart and brings back a reminder of the blessings we’ve seen.”

In his homily, Bishop Jenky reminded the parish that the reason to have Catholic schools is that “Jesus is the teacher” in every classroom.

“His Gospel words are what guide not only the young people,” said Bishop Jenky, “but hopefully their parents and grandparents and the members of this faith community that have allowed Catholic education to flourish in this town.”