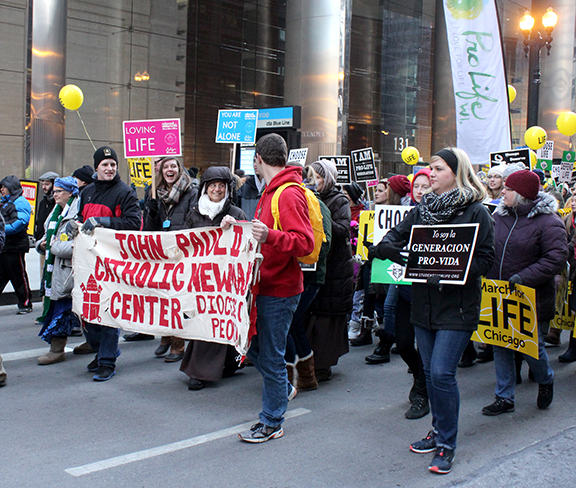 The group that traveled to Chicago on the bus sponsored by the Diocese of Peoria marches north on Dearborn Street as March for Life Chicago gets under way. At right is Shirley Plaag, coordinator of the diocesan Office of Evangelization and Faith Formation, who organized the pilgrimage. (The Catholic Post/Jennifer Willems)

CHICAGO — Despite the seriousness of the issue of abortion, it was the determination to celebrate life that drew 5,000 people to Federal Plaza here Jan. 15 for March for Life Chicago.

Their cheers were met by words of gratitude from the speakers — including Cardinal Blase Cupich of Chicago, abortion survivor Gianna Jessen, and legislators on both sides of the aisle — who encouraged them to keep speaking up.

“My challenge to you today is to take every opportunity to discuss the issue of abortion,” said Randy Dziak, president of Illini Collegians for Life at the University of Illinois in Urbana-Champaign. “Forget keeping your opinions and beliefs to yourself. We cannot let our voices be silenced because there are innocent lives at stake.” 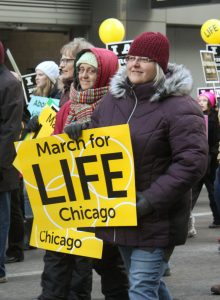 Suzie Meismer (foreground), Kathleen Abel and Karen Guth, all of Peoria, add March for Life Chicago to the long list of respect life witnesses they have undertaken over the years. (The Catholic Post/Jennifer Willems)

U.S. Rep. Darin LaHood, R-Illinois, who is from Peoria and serves the 18th District, said he was happy to see so many children and young people, as well as the diversity of the crowd.

“I commend all of you for your dedication and commitment to life,” he told those gathered before him. He pledged to continue his efforts to defund Planned Parenthood, endorse the Hyde Amendment, which prevents federal funds from being used to pay for abortions, and support the appointment of a conservative justice to the Supreme Court, and work every day to reverse Roe v. Wade.

“I’m proud to be here today with my family to support you, and I look forward to taking your energy back to Washington, D.C.,” LaHood said.

Citing Pope Francis’ call to make families a priority if progress is to be made in defending human life and dignity, Cardinal Cupich said, “Today, we march side by side as one family with the aim of making all of our families stronger, more vibrant, life-giving, protective and sustainable, so that the new members of our families will always be welcome.”

Inherent in the day’s theme, “Life Wins,” is the promise to work for adequate health care legislation, advocate for family leave policies that support mothers and fathers, and enact laws that keep families together even if some have no documents, he said.

Among the participants were students from St. John Paul II Catholic Newman Center at Illinois State University in Normal, St. Joseph Catholic Newman Center from Bradley University in Peoria, and longtime pro-life advocates from the Peoria area, who traveled on a bus sponsored by the Diocese of Peoria. Also making the trip were students from St. Bede Academy in Peru, who were accompanied by Father Ronald Margherio, OSB, chaplain, and Central Catholic High School in Bloomington, who were led by Father Dustin Schultz, chaplain, and Lauren Booth. 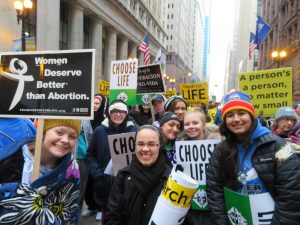 Sister M. Bernadette, FSGM, is surrounded by the students she accompanied from Alleman High School in Rock Island to March for Life Chicago on Jan. 15. Before going to Federal Plaza for the march, they attended a rally and Mass at St. Ignatius College Prep in Chicago. (Provided photo)

A group from Alleman High School in Rock Island attended the rally and Mass at St. Ignatius College Prep in Chicago before heading to Federal Plaza for the speeches and march through Chicago’s Loop.

Many from central Illinois cited the witness of Jessen, who survived a saline abortion, as one of the most powerful of the day. Speaking of love, not hate, she said she had met her biological mother and forgiven her.

“Any woman who is listening who has had one or more abortions . . . there is nothing you cannot be freed from, forgiven for,” Jessen said. “You are loved.”

While Jessen developed cerebral palsy as a result of her birth experience, “she grew up as an intelligent and powerful woman who loves everyone and that really showed me how forgiving someone can be,” said Alleman freshman Samantha Coleman, who added that being at March for Life Chicago “really opened my eyes to see how this one thing has hurt so many people. The fact that we can actually do something about it is amazing.”

“It’s not often that you hear from an abortion survivor. They tried to stop her voice, but it was a good example that she clearly has a voice and she’s a person who deserves a chance,” Natajia Stamply of the St. John Paul II Catholic Newman Center said of Jessen.

Students also were inspired by the way she talked about Jesus. One said, “It all comes down to Jesus’ love for us. Everyone has a right to know that love.”

STANDING UP, COMING TOGETHER

The high school and college students took heart from seeing how many people were there.

“We must stand up and come together to end this injustice in our society today,” said Maris Boelens, a senior at Alleman. “This is our future. It made me realize how special everyone is. I totally would go back every year and do it again. I loved the experience. It was very inspirational and emotional.” 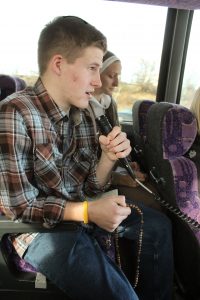 Andrew Belgri of the St. John Paul II Catholic Newman Center at Illinois State University leads the first decade of the Joyful Mysteries of the rosary as the group on the bus sponsored by the Diocese of Peoria travels to March for Life Chicago on Jan. 15. (The Catholic Post/Jennifer Willems)

“It really lifted my spirits,” said Matt Snyder of St. Bede Academy. “I would gladly go again to raise awareness for a good cause.”

Longtime respect life advocates like Suzie Meismer, coordinator of the Family Resources Center in Peoria, were moved by being able to walk united for life. “It was just a beautiful thing to ponder over and over again.”

Shirley Plaag of the Office of Evangelization and Faith Formation, who coordinated the diocesan-sponsored bus, found encouragement in the comments of Rev. Dr. Matthew C. Harrison, president of the Lutheran Church-Missouri Synod.

“He said 40 years ago the conscience of America was buried in a tomb and we’re going to see it through to the resurrection of the conscience of our country,” she recalled. “I thought that was really powerful, to reflect upon the fact that our consciences are numbed to the truth. We want to look away. We don’t even want to see it.”

Pro-life work may not always be rewarding, she said, but Rev. Harrison’s words gave her renewed hope that “this intrinsic evil” will be done away with and countless babies will be protected.

Father Schultz said the “positive cheer” he saw displayed throughout the march gave him great joy, as did the commitment of the students from Central Catholic.

“They didn’t miss school to come,” he told The Catholic Post. “They took their Sunday, their free time to come and be part of it, which I thought was pretty great.”

As the pilgrims from the St. John Paul II Catholic Newman Center returned to campus, Sister M. Silvia Tarafa, SCTJM, director, reminded them that this is a spiritual battle.

“Our weapon is love,” she said. “To hide that love is to allow evil to continue and we can’t do that. We were created so we don’t do that.”

EDITOR’S NOTE: More photos from March for Life Chicago have been posted to The Catholic Post’s Facebook page.