KEWANEE — Asked how they would help someone at Christmas if they had $50 in imaginary “Vis Bucks” to spend, the fifth- and sixth-graders at Visitation Catholic School got creative. When they each received an actual $50 bill the next day, they got to be a “Friend of Jesus.”

Visitation was one of 25 schools chosen to participate in the project by the Daughters of St. Paul in Chicago. The community received $25,000 from a donor who had benefited from an act of kindness nine years earlier and wanted to “pay it forward.”

“As many angels are, they wish to stay anonymous with the good deeds that they do for others,” Sister Jacqueline Jean-Marie Gitonga, FSP, said in a letter sent to parents. The children were simply asked to decide on and give away a gift to someone in need and then write a letter describing how they used the money, how the project made them feel, and what they learned from the experience. 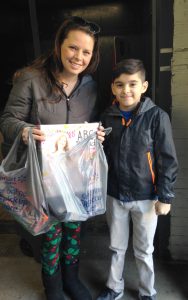 Alejandro Pompa of Visitation Catholic School, Kewanee, delivers his Angel Tree donation for the Salvation Army to Amber Troxell. She organizes the toy drive each year in memory of her brother, Sgt. Schuyler Patch, who was killed in Afghanistan in 2009. (Provided photo)

To aid in their decision making, the students received a book, “The Works of Mercy Explained,” which was written by Silvia Vecchini and published by Pauline Books & Media.

“It just so happened that our fifth and sixth grade were already doing, because of the Year of Mercy, acts of kindness,” said Sheila Cromien, principal. “This fit into what they had been doing all year.”

When the “pretend project” with the Vis Bucks was proposed by teachers Katie Carlton and Janelle Gibson to prepare the students, the children came up with many ways to help and most of those ideas translated to the “Friend of Jesus” project. Some, such as assisting an animal shelter, had to be reconsidered.

“With us not being in a large metropolitan area there’s not a soup kitchen on every corner, but there are still many people in need,” Cromien said. “They really did come up with their own thoughts.”

In the end, the 18 students provided firsthand help with Angel Tree projects in Kewanee and Galva, food pantries, the Salvation Army, and Ronald McDonald House Charities. They also bought stuffed animals for the patients at Children’s Hospital of Illinois in Peoria; sports equipment for an orphanage in Tanzania; glasses and bedding for two children in Kewanee; baby articles for an expectant mother and diapers of all sizes for the St. Vincent de Paul food pantry at Saint John Paul II Parish in Kewanee; and presents for a man in the nursing home.

Cooper Bates, for example, chose a boy from the Angel Tree that was about his age and used his money to buy “Star Wars” pajamas, jeans, a winter coat, and “Star Wars” action figures and ships, Cromien said. “He reasoned that if he liked them, the boy would, too.”

Mya Mirocha elected to give gifts to children on the Angel Tree “because I feel like I usually get everything I want for Christmas and years past they may not have gotten anything. I feel that I helped those two kids be a little happier this Christmas.” As was the case with several other students, her family got involved and augmented the original $50.

James Campbell donated to the Galva Food Pantry and said, “Giving food to the hungry is an Act of Mercy. I think Acts of Mercy are important because it helps others and gives you a feeling of joy and kindness in your heart.”

“Doing this project made us feel like we were helping the whole world, even though we only helped a small portion of it,” Addi and Brady Clark wrote of their purchase of 500 diapers. Cromien said they laughed about how much fun they had making the purchases, especially since Brady was the one pushing the cart overflowing with diapers.

Cyrus Sloan loves sports and assumed the students at Children of Hope and Faith, an orphanage in Tanzania sponsored by Father Johndameseni Zilimu, his pastor, would, too. He went to the local sporting goods store to buy six soccer balls, a ball bag, and a pump.

“While shopping, the owner asked what he was doing,” Cromien said. “When Cyrus told him, the owner threw in three more balls because he thought it was a great cause. Father John will personally deliver them during his next trip home to Tanzania.”

Cromien said it was a great project.

“It was good for our kids to realize that not everyone is as fortunate as they are,” she told The Catholic Post. “And they were allowed to recognize not only the needs of the people — of the children in most cases — but to feel the gratification that comes along with helping to meet some of those needs. . . . The donor’s main thing was letting the kids experience the joy of giving and I do think they did that.”