Students, shut-ins in Morton have been developing relationships for 25 years 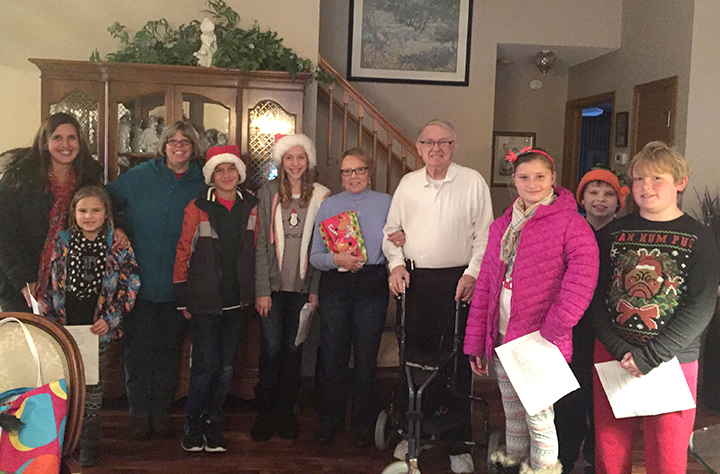 A group of fifth-graders from Blessed Sacrament School in Morton visit with their pen pals, Bill and Joann Anderson, after singing Christmas carols and delivering handmade Christmas cards and a gift to them. They were accompanied by their families and teacher Karen Spring. (Provided photo)

MORTON — Lessons in writing friendly letters aren’t always about developing good communication skills. In the hands of Karen Spring of Blessed Sacrament School, they help her fifth-graders to develop relationships with senior members of the parish, as well as a lifelong concern for others.

“It works both ways,” Spring explained. “My class sees how much happiness they are bringing them and then the shut-in realizes how much my students care about them. We always pray for them. . . . Just to know that someone is out there that’s praying and cares about them — it’s such a good feeling on both sides.” 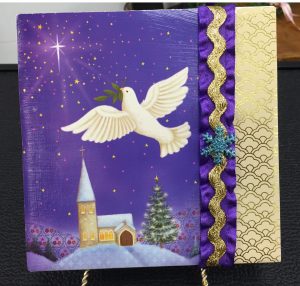 A ceramic tile decorated with faith-based art, ribbons and festive paper by the students was presented to each senior pen pal. (Provided photo)

The tradition started 25 years ago, when Spring joined the staff at Blessed Sacrament. More than a service project, it is an opportunity for the students to explore what it means to be a Good Samaritan and invites them to do random acts of kindness.

Spring works with pastoral associate Mickey King to identify the parishioners — many of them living in assisted care or nursing homes — who would benefit from a pen pal relationship with her fifth-graders. The students send cards for special occasions like Halloween, Valentine’s Day and Easter, and write letters throughout the school year as part of religion class.

At Christmas, they reach out in a special way.

“I thought, we’ve been writing to them but it would mean so much more if we could put a name and a face together,” Spring said. “Nine years ago I decided let’s just take a Sunday that my class and I and their families can go out to all the shut-ins that we write to and sing Christmas carols and bring them a little gift.”

This year the group went out on Dec. 4 and one woman was so excited that she invited the whole neighborhood to come to her house to hear the singing and provided hot chocolate for everyone. When the Blessed Sacrament carolers got to an assisted living facility where five or six of their pen pals live, they found 30 people waiting for them.

“I wish we could reach out to all of them,” Spring said, noting that she has just 22 students.

They couldn’t visit one of the nursing homes because there was so much sickness there, so she arranged for those five students to visit with a teacher’s aide a few days later. 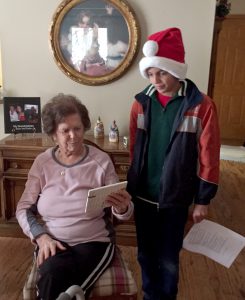 Cecelia Allen examines the gift given to her by Blessed Sacrament fifth-grader Joaquin Hoeft. The Morton students visited their pen pals and serenaded them with Christmas carols in December. (Provided photo)

If someone won’t be home when the group goes caroling, Spring sends their card and gift with the eucharistic minister who visits them on a regular basis.

Students make the gifts with the help of their room mothers. This year they did a Mod Podge, applying faith-based Christmas art to a ceramic tile and decorating it with ribbon and festive paper. They included a small stand purchased at a craft store.

“They’ll say, ‘Wow. I didn’t realize how much just a little Christmas carol, just singing to them, brings so much joy and happiness and smiles to them, and they’re so appreciative that we come,’” Spring said of her students.

While new people are added to the list every year, siblings are encouraged to “adopt” the pen pal of their older brother or sister. Some relationships last for years after the students leave fifth grade, according to Spring.

One of those long-term relationships developed between a young Joe Baker — now Father Baker, parochial vicar at St. Mary in Bloomington — and Dorothy Kelch.

“I do not believe there was a year that ever went by, until Dorothy died, that I did not write her,” he told The Catholic Post. “I think I probably sent her two or three letters every year.”

She lived long enough to see him enter Mount St. Mary Seminary in Emmitsburg, Maryland, and after she moved to Virginia to be closer to her son the pen pals were able to meet for dinner. Father Baker still has a picture of the two of them on his desk.

Before Mrs. Kelch died in 2011, she gave him a bag with all the cards and letters he had sent her over the years.

“When I think about that project Mrs. Spring has, I think it was the most significant thing I did in seven years of Catholic school in terms of forming me as a disciple of Christ,” he said.