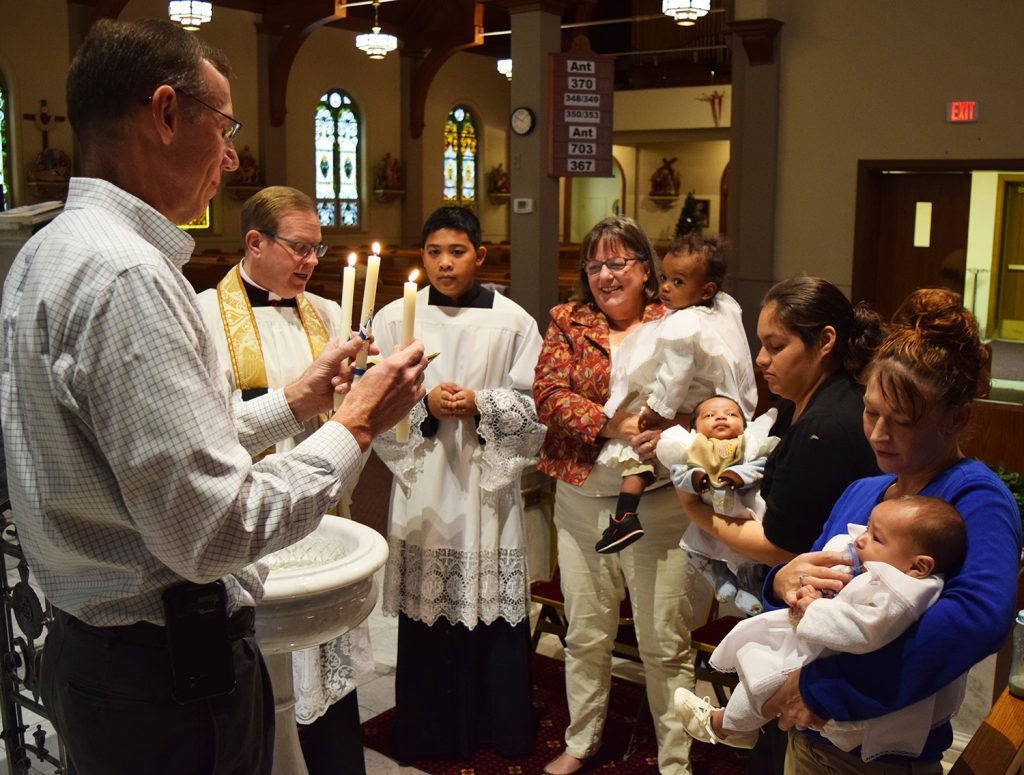 Dr. Steve Smart holds candles as Msgr. Stanley Deptula presides during a triple baptism Dec. 4 at St. Bernard Church in Peoria. Dr. Smart and his wife, Kate (center, holding Marvin) were godparents for the children of Tiffany (right, holding Jayke) and Maricela (next to Tiffany, holding Anthony), young women they took into their home during times of need. (The Catholic Post/Tom Dermody)

Jayke, Marvin and Anthony began their journey to become saints on Dec. 4, the baptism day for the three well-behaved little ones at St. Bernard Church, Peoria.

And after many dangerous detours, their mothers are back on the same path — restored to grace by the sacraments and through honoring Mary by observing the house rules of a local family who gave them a home when they were at their lowest point.

“When I met the Smarts, I saw goodness for the first time in a long time,” said Tiffany Macarthy, 31, who gave birth to Jayke Matthias Hagston on Sept. 14. “I had lost my way 20 years ago,” she acknowledged, culminating in an addiction to heroin that led to three overdoses during which her heart stopped.

Tiffany was just out of a drug treatment program, newly pregnant, and “had nowhere to go” in April when she was referred to Dr. Steve and Kate Smart, a couple from St. Bernard Parish who in recent years have sheltered four women in need within their own home.

The only thing they ask in return?

That their houseguests accompany the family to daily Mass and join in the family rosary every night.

“I’D NEVER KNOWN SUCH A PERSON” 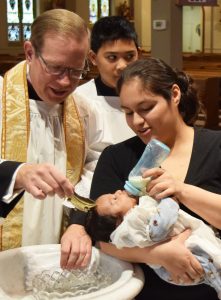 Another of those guests was Maricela, the mother of Marvin, almost 2, and Anthony, born Oct. 30. Now 23, Maricela’s background includes being kidnapped as a teenager, moving to Peoria at age 18 as part of a witness protection program (which is why her last name is not revealed), being evicted from a homeless shelter and, like Tiffany, having thoughts of suicide.

“I always had negative thoughts in my head,” Maricela told The Catholic Post. “I never looked at anything positive in my life.”

Until she, like, Tiffany, was taken in by the Smarts.

“At first I was skeptical,” said Maricela. “I’d never really known of a person who just opens their home, especially to a pregnant woman, without paying rent. It didn’t seem real.”

It is real because their love for Christ compels the Smarts — who would become the godparents of Tiffany’s and Maricela’s babies — to love everyone, especially those most in need. The Smarts, who have four grown children, have adopted four others, including two boys from the Philippines and two girls from Ethiopia.

“Christ drives me,” says Kate Smart. “There is this despair where people have no hope sometimes. If something that I can do can give hope, I will do it. Because there is so much hope. These three babies represent hope.”

And so, now, do their mothers.

“My life couldn’t be better at this time, and a lot of that is because of the church — going to Mass every day,” says Tiffany, who was raised Catholic in the St. Louis area but had not been to Mass since age 10. The week she moved in with the Smarts, Tiffany accompanied Kate on a visit to the Community of St. John in rural Princeville. Tiffany didn’t know it was a monastery, so she lit up a cigarette in an open area. 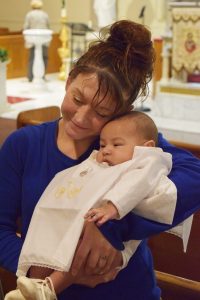 While smoking, she was approached by Father John James, who struck up a conversation with the visitor. Before they parted, he led Tiffany through the sacrament of reconciliation.

“It was nice,” she said of receiving the sacrament of mercy, while also adding “it was hard” to share the mistakes of her past two decades.

The example of the Smarts and her reconciliation with the church “has really changed me a lot from a criminal who was running with the devil to a healthy, safe, friendly, trustworthy, honest, good person,” says Tiffany.

While continuing to live with the Smarts, Tiffany is now in the Rite of Christian Initiation of Adults process at Sacred Heart Parish in Peoria and looking forward to the sacrament of confirmation this spring.

Her sponsor? Kate, of course.

And Tiffany has a job, thanks to someone she met through RCIA who owns a local gutter protection company.

Maricela is similarly grateful, especially to the woman she affectionately calls “Miss Kate.”

“When I came to live with Miss Kate and started going to church and things like that, I became more happy,” said Maricela, who now has a job at an area restaurant and her own apartment. She has reconnected with the faith of her childhood, and since the baptism of Marvin and Anthony “I’ve obligated myself to attend church every Sunday.”

A LOT OF WORK REMAINS

But do not confuse the newly happy, hopeful, and grateful lives of these single mothers — or the family who took them in, for that matter — with the word “easy.”

“I still have a lot of work to do,” said Maricela, who travels by city bus every day with her little ones in tow. But she said the Smarts and the church have given her “an opening to see how great life is if you are dedicated to God.” She now prays while riding that bus, grateful for the roof over her head, for food, for her children.

Tiffany, meanwhile, has wounds that still hurt. She turned to drugs to cope with the grief of losing two children, ages 4 and 5, in a house fire.

“They were everything to me,” she says of her children. “So I turned my back on God. I hated God and thought it was his fault.” However, the drugs and former “so-called friends” would “cause a lot more problems in my life.” Three children she subsequently had are being raised by her mother.

“When I met the Smarts I saw there was a chance for my life,” said Tiffany. “That I could do it with their help. They are great people and they don’t want anything else but for me to do good with my life.”

Practicing such open-door Christianity has its burdens and risks, acknowledges Kate.

“Every person brings with them past experiences and struggles which all need to be assimilated into the family’s life,” she said. “But love — and an occasional house blessing — exceeds all the struggles.”

In addition to the words of Christ, Kate takes her inspiration from the example of her son’s mother-in-law, Connie McEldowney, founder of Rustic Hope, a ministry that offers free support to pregnant teens before, during and after delivery.

Early in the baptism ceremony at St. Bernard Church, Msgr. Stanley Deptula asked the mothers if they accepted the responsibility for bringing Jayke, Marvin and Anthony up in the practice of the Catholic faith.

The path that led to their answer of “I do” may have been unconventional, but as a new year and their renewed lives unfold, it certainly qualifies as inspirational.