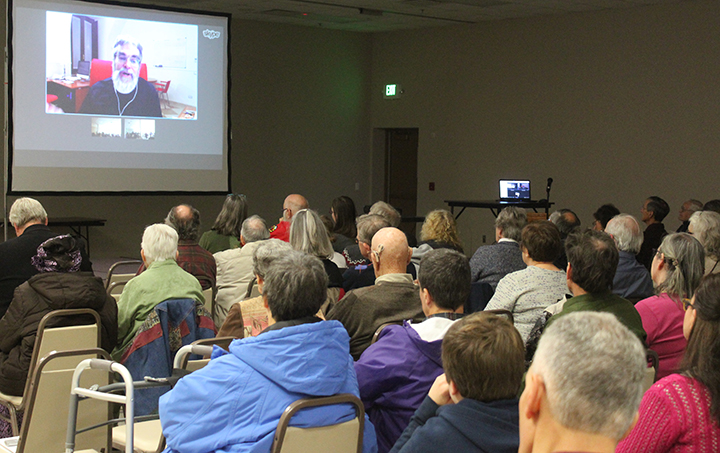 Jesuit Brother Guy Consolmagno, director of the Vatican Observatory in Rome, addresses a crowd via Skype at Trinity Hall of St. Patrick Parish in Urbana on Nov. 20. (The Catholic Post/Jennifer Willems)

URBANA — Being on two different continents didn’t seem to matter much when St. Patrick Parish here hosted a “visit” from Jesuit Brother Guy Consolmagno, director of the Vatican Observatory in Rome, on Nov. 20.

With the help of Skype, the seven-hour time difference melted away, making it possible for parishioners and their guests to discuss “Cosmic Faith: Exploring the Big Questions of Science and Religion” with Brother Guy, a Detroit native. Appropriately enough, the session came on the Solemnity of Our Lord Jesus Christ, King of the Universe.

It was one of the last events in the yearlong celebration of the rededication of St. Patrick Church. An anniversary Mass is planned for Friday, Dec. 9, at 7 p.m. A reception will follow. 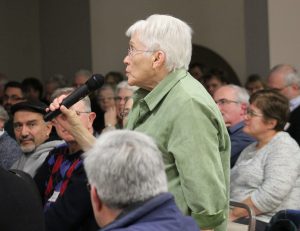 Lu Pillar, a member of St. Patrick Parish in Urbana, asks Jesuit Brother Guy Consolmagno to define what a black hole is during a Skype session between the parish hall and the Vatican on Nov. 20. (The Catholic Post/Jennifer Willems)

The discussion was moderated by Father George Remm, former pastor. While Brother Guy offered a short opening reflection, he spent most of the time answering questions from the people gathered in St. Patrick’s Trinity Hall.

He started with one of his own: “Why do we do astronomy when people are starving in the world?” That nagging question led him to give up science as a 30-year-old post-doctoral fellow at the Massachusetts Institute of Technology and join the Peace Corps.

Sent to Kenya, he soon found himself teaching astronomy to graduate students – something he could have done in America. But on the weekends, he would take a little telescope and some slides on visits to friends who were in “the real Peace Corps.”

Marveling at the universe and asking the big questions is what makes us human, Brother Guy said, noting that this is why we do astronomy.

It’s important to help the poor, but it can’t be for the sole purpose of making them rich, he explained. Rather it has to be so they have the opportunity to engage in all the things that make us human, such as art, dance, theater – and to look at the sky and wonder.

Questions posed to Brother Guy, who has worked at the Vatican Observatory since he entered the Jesuits in 1989 and was named its director by Pope Francis last year, covered the spectrum from time travel, black holes and keeping children interested in science, to baptizing aliens (“only if she asks”) and the relationship between faith and doubt. He answered each one with humor and insight, putting inquirers at ease but making participants think beyond the initial burst of laughter.

For example, if an extraterrestrial made an appointment for the sacrament of reconciliation with Father Remm, what might the alien confess? 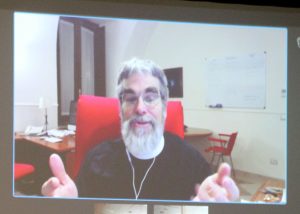 “God gave us this physical universe as a way to get to know him,” said Brother Guy. (The Catholic Post/Jennifer Willems)

“In science we have this assumption that the rules of physics are the same everywhere in the universe. That’s why we can attempt to calculate what’s going on inside a star in a different galaxy,” he told his listeners. “I think the laws of right and wrong also have to be the same.”

“That would be the same whether you’ve got 27 tentacles and are colored green or you look like me — not quite so many tentacles,” he continued. “I think the laws of right and wrong and the law of love that ultimately is God has got to be the same for any intelligent entity.”

Does the Vatican have a script for how the church would respond if an alien were encountered, someone wanted to know.

With about 500 people at the Vatican taking care of the needs of 1 billion Catholics around the world, there isn’t time to create a big book of answers, Brother Guy said.

“Regardless of if it happens or if it could happen or when it’s going to happen . . . it’s going to take us by surprise,” he responded. “The worst thing to do is come up with an answer before you know the parameters of the question.”

When he was asked about alien baptism on a visit to England, for example, it was easy to laugh about it. But the principle would be the same used for baptizing anyone else, he said: Did they ask for it? Do they know what they’re asking for? Do they really want this?

If an extraterrestrial were to travel through time and space to get here and wants baptism, “they’re taking our religion a lot more seriously than those reporters were,” he added.

“Since the beginning of time, God has spoken to us in the things he has made. To close your eyes to that is closing your eyes to God.”

“God gave us this physical universe as a way to get to know him. That’s not me. St. Paul says that in Chapter 1 of his Letter to the Romans,” Brother Guy said. “Since the beginning of time, God has spoken to us in the things he has made. To close your eyes to that is closing your eyes to God.”

Science is one way to become intimate with the physical universe, but it isn’t the only way, he reminded them. All disciplines offer that opportunity.

“It would be a terrible universe if we just had science, but I think it would be a very poor universe if all we had was the kind of faith I had when I was 10 years old,” Brother Guy said. “I think I want to be able to grow in both.”

During the afternoon, Brother Guy shared his thoughts on a variety of other subjects, including:

On science and theology: “If we knew all the answers to theology or science, you and I would be out of a job. We’re never going to run out of answers because every answer opens up five new questions. That’s the way it works,” Brother Guy told Father Remm in answer to the first question.

The problem is, most people stop learning about science and religion when they’re about 12. At that point, all they’re doing is memorizing facts. That’s a good beginning, but more study is required in both areas.

Brother Guy said he likes to remind people that science is understanding seeking truth, while religion is truth seeking understanding.

On the origins of the universe: The first thing God says in creating the universe is “Let there be light” because God is not doing anything hidden. Everything is there for us to see, Brother Guy said, noting that the climax of the creation story is the Sabbath, when God rests and we can have time to rest with God.

“You don’t want to squeeze modern science into the Bible for a couple reasons. For one, it’s abusing the Bible,” he said. “If you try to turn Genesis into a science book you’re missing the whole point of Genesis. It’s not about science; it’s about the Creator.”

If it’s also true that science keeps changing and growing, then whatever people try to push into Genesis now will look silly in 100 years, “If it looks like today’s cosmology, I would be very disappointed because it would mean that we haven’t learned anything.”

The glory of Genesis, Brother Guy explained, is that it tells us creation was a deliberate act of God, who looked at what was created each day and declared, “This is good.”

“It tells me that the universe that God made has regularity to it that I can understand. The fact that God does it in the light tells me that yes, it should be understandable,” he said. “I have the courage to do the science. And the fact that he did it and it’s good means it’s worth my while to do science.”

On faith and doubt: “Faith cannot exist without doubt,” Brother Guy said. “If you didn’t have the doubt, you wouldn’t need the faith. You always have to have that element of doubt because it makes the faith all the sweeter.”

“If you’re not humble, you won’t have any fun doing the science or being the religious person because you will never give yourself the chance to be surprised by God.”

Skepticism is also a gift for scientists and people of faith, he said. If you accept that “I could be wrong,” you’ll continue to ask questions.

“But one always has to be humble. If you’re not humble, you won’t have any fun doing the science or being the religious person because you will never give yourself the chance to be surprised by God.”

On Jesus being present on other planets: What we know about Jesus is that he is the second person of the Trinity and was there as the Word of God at the beginning of the universe, Brother Guy said. He added that the salvation of Jesus is for the universe.

“Would it be possible that this Word could be spoken to another race, in another language, at another time, and it would be the same second person of the Trinity,” he pondered.