Father Harold, 78, will return to St. Bede Abbey and be succeeded by Father Jacob Rose, who has been named administrator of the parish. Currently Father Rose serves as parochial vicar at St. Michael the Archangel Parish in Streator and St. Patrick Parish in Seneca, and chaplain at Marquette Academy in Ottawa. 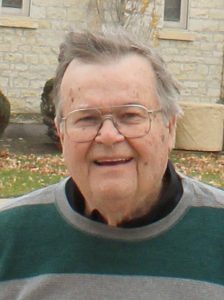 “In the sacrament of confession I have had the joy of seeing people come back to the church after 20 years, 40 years,” said Father Harold. (The Catholic Post/Jennifer Willems)

The appointments become effective on Jan. 9, 2017, the Feast of the Baptism of the Lord.

That seems fitting since Father Harold has seen many baptisms in his 19 years at the Peru parish. He told The Catholic Post he is witnessing the marriages and baptizing the children of the children he baptized as parochial vicar from 1977 to 1984, and has continued to see a steady stream since he returned as pastor 12 years ago.

“That’s a good sign. The church is continuing to flourish,” he said.

Another sacrament that has given him great satisfaction, especially during the Jubilee Year of Mercy that just concluded, is the sacrament of reconciliation.

“It’s been a wonderful thing,” Father Harold said. “In the sacrament of confession I have had the joy of seeing people come back to the church after 20 years, 40 years.”

The people of St. Joseph have always availed themselves of this sacrament and he has made certain they have plenty of opportunities before Christmas and Easter each year.

Another source of joy has been watching Peru Catholic School thrive. Father Harold tries to go over every day to let the students, teachers and staff know that he is available for them, and celebrates Mass for them every Friday.

Used to early rising as a Benedictine monk, he also offers Mass at 6:25 a.m. for the people who want to come before heading off to work. It’s another way to serve people, he said.

Born in Earl Park, Indiana, on Nov. 7, 1938, Father Harold came to St. Bede Academy for high school since there were no Catholic high schools in the Diocese of Lafayette, Indiana, at that time. By his senior year, he decided to enter the Benedictine community and study for the priesthood.

Father Harold also holds a master’s degree in religious education studies from the University of Detroit. 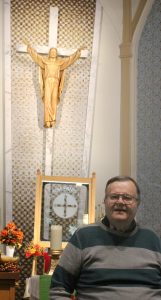 “Benedictines are known for liturgy, so I wanted to make the church something special,” said Father Harold. (The Catholic Post/Jennifer Willems)

Father Harold taught Latin and religion for 12 years at St. Bede Academy before transitioning into parish ministry. He would go on to serve as pastor or administrator at all the parishes staffed by the Benedictines, including Holy Trinity in Cherry and St. Patrick in Arlington (1984-87); St. Thomas More in Dalzell (1988-95), where he oversaw demolition of the old church and construction of a new church; and St. Benedict in Ladd and St. Gertrude in Seatonville (1995-2005).

Since his predecessors had overseen construction of and updated all of the other buildings on St. Joseph’s campus, Father Harold concentrated on refurbishing the church. Parishioners painted the interior over four summers and new carpet was installed.

“Benedictines are known for liturgy, so I wanted to make the church something special,” he told The Catholic Post.

Father Harold has been careful to maintain his relationship with his religious community, going to the abbey almost every day for lunch and serving as almoner. He will continue in that role when he returns in January, according to Abbot Philip Davey, OSB.

“I think Father Harold has a number of ways in which he can contribute to the monastery and the church,” said Abbot Philip. “I look forward to exploring that with him.”

Noting that the Benedictine monks from St. Bede had served St. Joseph for more than 100 years, Abbot Philip said there is a certain amount of sadness in knowing the relationship is going to change.

“At the same time, there’s a real joy in appreciating how much has happened there in this time and how much we’ve contributed to the parish,” he said. “We’ll continue to be neighbors and try to help each other. That’s really what it’s all about.”

Father Rose, the new administrator, knows St. Bede and the Illinois Valley well. He grew up in La Moille and his family was active in Sts. Peter and Paul Parish in Peterstown.

He attended St. Bede Academy, graduating in 2005, and went on to Immaculate Heart of Mary Seminary in Winona, Minnesota. Father Rose completed his studies for the priesthood at Mount St. Mary’s Seminary and was ordained May 25, 2013.