The screening of a new documentary showing the work of a religious community among destitute and homeless people around the world brought repeated appeals for viewers to “hit the streets” in their own communities to find and serve those in need.

“You people know Jesus. That’s why you’re here,” said Brother Elijah, a five-year member of the Franciscan Friars of the Renewal, the community portrayed in “Outcasts” by Grassroots Films. 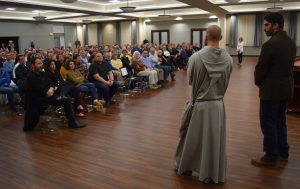 Brother Elijah, a former seminarian of the Diocese of Peoria known as Max Perry before he became a consecrated brother, took questions along with the film’s director after more than 250 people viewed the documentary Nov. 5 at Hettinger Hall of St. Jude Parish, Peoria. The documentary makes viewers confront the realities of life as experienced by drug addicts, women engaged in prostitution, people dying of AIDS, and prisoners — as well as the efforts of the Franciscan Friars to share hope in Christ with them in some of the world’s toughest neighborhoods.

“Find where in your community there are poor people. That’s what Christ did,” suggested Brother Elijah in response to a viewer who was moved by the film to ask how she, too, could help those “who need to know that Christ loves them.”

“Find them. They need you,” repeated Brother Elijah, a native of Arlington Heights who has served the poor in Harlem, Newark and Albuquerque and will soon begin studies for the priesthood.

“FIND SOMEBODY IN YOUR CHURCH”

Specifically, Brother Elijah invited Catholics first to speak with their parish priests. Most parishes, he said, have some kind of group serving the poor, such as the Society of St. Vincent de Paul, or can direct inquirers to other opportunities such as with the Missionaries of Charity in Peoria.

Ken Zika, who is active with the Society of St. Vincent de Paul locally, expressed appreciation for the mention.

“I dare say there’s very little I saw in the film that we haven’t seen on the South Side of Peoria,” said Zika. “If you’re moved tonight, find somebody in your church and talk about the Society of St. Vincent de Paul.”

“If you’re moved tonight, find somebody in your church and talk about the Society of St. Vincent de Paul.” — Ken Zika

It was the heroic efforts of the Franciscan Friars of the Renewal — begun in 1987 by eight Capuchin friars including Father Benedict Groeschel, CFR — that led to the making of “Outcasts.” The hour-long film takes viewers to the neighborhoods the community serves in the Bronx and Harlem, N.Y., as well as London; Limerick, Ireland; and a prison in Comayagua, Honduras.

Crews spent a week filming at each location, according to Clifford Azize, director, who also was present for the screening at St. Jude.

Asked if it was difficult to get those with shattered lives to share their stories on film, Azize said some were willing to do so to help the friars whom they have grown to love.

That’s Azize’s reason for making the documentary as well. As a teen, he spent time in St. Francis House, a home in Brooklyn founded by the Franciscan Friars of the Renewal for inner city youth who need a second chance in life. His other film projects include award-winning “The Human Experience,” as well as the vocations-promotion film “Fishers of Men.”

Azize invited parishes and other groups wishing to screen “Outcasts” to contact Grassroots Films at (718) 349-7622 or visit the movie’s website, outcaststhemovie.com.

The film was brought to St. Jude by Marsha Kampfl, who has brought three other faith-based films to Peoria to raise funds for charity. Proceeds from the screening of “Outcasts” went to St. Francis House as well as the Franciscan Friars of the Renewal. Kampfl said the the Franciscan Friars have struggled to raise money since the death of the popular Father Groeschel — a noted author, retreat master, and television host on EWTN —  in 2014. 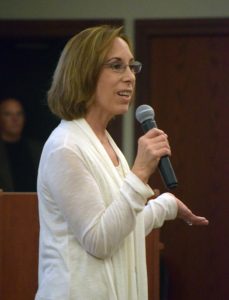 “God called you here and I hope (the film) impacts you in some way,” said Marsha Kampfl. (The Catholic Post/Tom Dermody)

Because of the film’s real-life depiction of tough neighborhoods and desperate situations, it is recommended for mature audiences only.

“There are a lot of things you may not like to see, but God called you here and I hope it impacts you in some way,” said Kampfl in introducing the film.

The responses indicated that mission was accomplished.

Brother Elijah, who was not among those portrayed in the documentary, said he didn’t want to “overly romanticize” the life that community members lead among the poor and destitute.

“There are rough days when you are drained,” he said. “The sadness is intense because you see people continually spiral down. But that’s when you learn how to pray. You find yourself on your knees and saying to Christ ‘We need you.’ And the joys outweigh the sorrows a million times.”