Peoria is now base for ‘Heroic Families’ founder; hopes to speak at many parishes 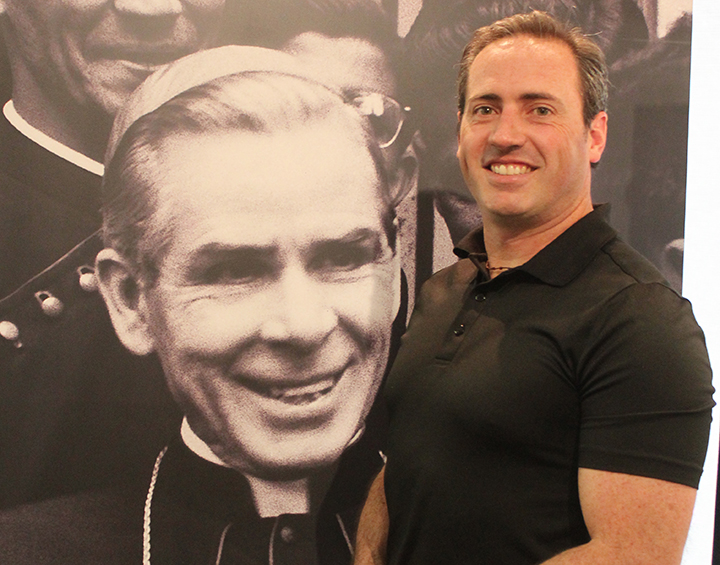 Dr. Peter Howard stands near a photo of Venerable Fulton J. Sheen in the Catholic Diocese of Peoria Museums at the Spalding Pastoral Center. Archbishop Sheen's "prophetic wisdom and spiritual legacy" is a favorite topic as Howard speaks around the country. (The Catholic Post/Jennifer Willems)

Comic books, TV shows and movie screens are packed with superheroes and their feats and as much fun as that can be, there’s nothing fictional about the need for heroes in family life today, according to theologian Peter Howard.

Rather than using superpowers, however, these heroes must rely on the power of God to save the day.

To help them do that, Howard and his wife, Chantal, have formed Heroic Families. The organization seeks to provide opportunities for families to find their purpose, remove whatever obstacles might be in their way, and adopt the spiritual “pillars” on which to build their lives.

“The tide is so strong — I don’t hold back anymore — that families will not survive it. We will not survive the times we’re in,” Howard told The Catholic Post. ”A big part of what we’re doing in this message is we’re waking families up.”

“The tide is so strong — I don’t hold back anymore — that families will not survive it. We will not survive the times we’re in. A big part of what we’re doing in this message is we’re waking families up.” Dr. Peter Howard, Heroic Families

He called the Catholic Church a “beacon of light” and said, “If families don’t discover this in a concrete way and find where they’re going to find their refuge and their hope, we have no future.”

The Howards take this message so seriously, that they made a heroic step of their own by moving their family from Colorado to central Illinois in order to place their gifts and talents totally at the service of God. Using the Peoria area as a home base, Peter will be traveling around the country to talk about Heroic Families and focusing in a special way on family consecration to Mary and “The Prophetic Wisdom and Spiritual Legacy of Fulton Sheen: Hope for a World in Crisis.”

He hopes to present both talks to as many parishes in the Diocese of Peoria as possible in 2017.

The Howards were scheduled to discuss Heroic Families during an appearance on the EWTN television program “At Home with Jim and Joy Live” on Nov. 3. The program was to air from 1 to 2 p.m. (Central Time) Thursday, and will be rebroadcast at midnight on Saturday, Nov. 5, and at 9:30 a.m. on Sunday, Nov. 6.

Howard is already a familiar face to those who attended the Diocesan Summer Institute in June. He spoke about the Blessed Mother and Venerable Fulton Sheen at that time and admits they are his favorite topics.

In fact, his doctoral dissertation, which is available as a book, explores “The Woman: The Mystery of Mary as Mediatrix in the Teaching of Fulton J. Sheen.”

The timing couldn’t be better to bring them to people again as the church prepares to celebrate the 100th anniversary of Fatima and the prayerful anticipation surrounding Venerable Sheen’s cause for sainthood, he said.

He said families need to discover somebody who can inspire them and help them live the heroic life, and that person is Fulton Sheen.

“I want them to experience what he has to say. What would Fulton Sheen have to say about our times today? That’s the prophetic part of the talk,” Howard explained.

“Then what do we learn about him and his life? He was so powerful and successful that if we do this, we should expect nothing less,” Howard said. “We need to rediscover what he meant and how he lived the pillars of the Eucharist and Mary.”

Sheen also provides a tremendous example of someone who committed himself to a challenging spiritual practice at his ordination — a daily Holy Hour before the Blessed Sacrament — and never failed to keep it. Howard also encourages families to make a commitment to prayer, although perhaps it would be 15 minutes a week to start with.

“We also talk about Scripture,” he said. “That’s at the heart of it. If we want to discover our purpose, we want God to talk to us. Well, that’s his word. How many saints have been inspired just by reading his word, about what to do next?”

After finding their purpose, healing and strengthening themselves, and establishing their spiritual pillars, families must “get out and get going.” Citing Fulton Sheen, Howard said people must make a definite decision to go forward because that’s the direction in which the Holy Spirit is moving.

Howard’s introduction to Fulton Sheen came by way of a taped retreat the central Illinois native son gave many years before. Within 15 minutes he was hooked.

“His message was timeless,” he said. “Not only that, it wasn’t just brilliantly articulated, which I think is one of his greatest gifts, but what he said takes root.”

That remains true and he advises anyone who wants an introduction to Sheen to pick up any of his books and forget about when it was written.

Howard earned his doctorate in sacred theology from the Pontifical University of St. Thomas Aquinas, also known as the Angelicum. He was able to write his dissertation in the United States and worked in adult faith formation and then family faith formation at St. Mary Parish in Aspen, Colorado, as he did so. Along the way, he also served as an adjunct professor for the Avila Institute of Spiritual Formation Graduate Program and School of Spiritual Formation.

He is the founder of the Fulton Sheen Society and serves on the advisory board of the new St. John Institute.

Howard has been married to Chantal since 2002 and they have four daughters and a son, ranging in age from 1 to 13.