Homecoming Week at Peoria Notre Dame was just that for its newest student, Anthony Stone.

“I feel this is the school where God wants me to be,” said the sophomore on Sept. 16 after his first week at the Catholic high school he prayed he could attend.

The path God chose to bring Anthony to Notre Dame — and soon, into the Catholic Church — wound from OSF Saint Francis Medical Center in Peoria to an embrace from Pope Francis at the Vatican in August to the front page of the local daily newspaper. 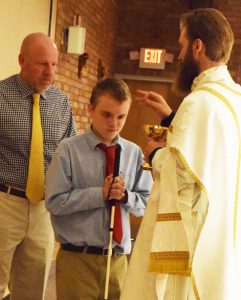 “God is opening many doors for me and is answering my prayer,” said Anthony, a humor- and faith-filled 16-year-old despite challenges that include living with cystic fibrosis diagnosed in infancy. The Creve Coeur teen is comfortable talking about his treatable, but not yet curable, disease.

“It’s a lung disease,” Anthony told The Catholic Post of the illness that claims many in their teens, 20s and 30s. “Slowly but surely these old lungs are withering away, so I have to get a lung transplant when I get older.” For now, he takes up to 60 pills a day. His mother, Brandy Rawlings, administers breathing treatments every four hours, every day.

And, oh yes, Anthony has limited eyesight due to a congenital defect of the optic nerve.

“Each and every one of us has been given hardships,” he says matter-of-factly. “We don’t know the reason why. Only God knows best.”

And perhaps only God could have scripted Anthony’s remarkable last month.

“I HAVE TO GO SEE THE POPE”

Anthony and his mother were visited by volunteers from the Make-A-Wish Foundation earlier this year. The organization strives to make the big dreams of children with life-threatening conditions come true.

Asked for his three wishes, Anthony’s top pick was to see Pope Francis — an interesting choice for a non-Catholic boy.

But in the preceding months, Anthony’s interest in the Catholic faith had grown during a four-day hospital stay at OSF Saint Francis Medical Center. He asked the priests and Sisters who routinely visit patients there questions, and their answers led to a sense that the Catholic faith is “the true way of worshiping the Lord.”

So presented the chance to wish big, Anthony went to the top.

“I reflected on what Father (Jeffrey Small) and the Sisters taught me and I prayed God would show me the right decision for my wish,” said Anthony. “I woke up one morning and decided, ‘I have to go see the pope.’” 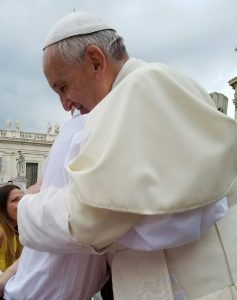 And so he did. In late August, the Make-A-Wish Foundation flew Anthony and his mother to Rome for five days and four nights, capped by a front row seat at Pope Francis’ Wednesday audience on Aug. 31.

After speaking, the pope approached Anthony and other children with disabilities who were seated with him.

“I could feel his holiness,” recalled Anthony, who stood up, shook the pope’s hand, and was embraced by the Holy Father who gave him a blessing and a rosary, which he carries with him at school.

A CALL FROM THE PRINCIPAL

The story of the encounter made the front page of the Peoria Journal-Star the following Monday. The line that jumped out at Randy Simmons, principal of Peoria Notre Dame, was a quote from Anthony’s mother: “He wants to go to a religious school, but I’m a single mom working my butt off and can’t afford it.”

Simmons called the family the next day. “We may have a solution for you at Notre Dame,” he told Anthony’s mother, who began to cry with joy.

Within a week, thanks to efforts of people “outside and inside the school,” financial and other necessary arrangements unique to Anthony’s condition had fallen into place and Anthony transferred from East Peoria High School to Peoria Notre Dame.

“He’s a unique treasure,” said Simmons of Anthony. “Our kids and staff will learn a lot from this young man.” 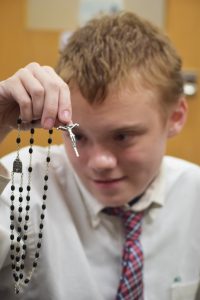 Anthony Stone holds the rosary he received from Pope Francis at the Aug. 31 general audience in Rome. (The Catholic Post/Tom Dermody)

Anthony attends early morning daily Mass and enjoys adoration at Peoria Notre Dame. He continues to learn more about the faith from theology courses as well as instructions from Father Adam Stimpson, school chaplain, and Father David Richardson at St. Philomena Parish in Peoria, where Anthony — who was baptized in a local Baptist church years earlier — hopes to be confirmed in a few weeks.

Simmons will be his confirmation sponsor.

Meanwhile, the doors keep opening. Anthony enjoyed homecoming activities last weekend, attending both the football game and the dance, accompanied to the latter by a date.

“I feel like God is calling me to join the priesthood,” said Anthony. He even hopes to take Latin soon because his college wish would be a seminary in Rome.

“I’d love for him to graduate from here,” said Simmons, stressing that Anthony is “very focused on why he’s coming here — he wants to become Catholic and walk in Christ.” He added that Anthony is the second student at Peoria Notre Dame with cystic fibrosis.

Anthony expressed gratitude to Simmons and all who are having roles in his prayers being answered.

“Everyone is trying to help out in many ways,” he told The Catholic Post. He expressed special thanks to Simmons, with whom he has formed a quick, comfortable kinship with mutual good-natured ribbing, including Anthony referring to his principal as a “wise guy” — in the comical sense.