Home shrine reflects the love this priest’s mother has for St. Teresa of Kolkata 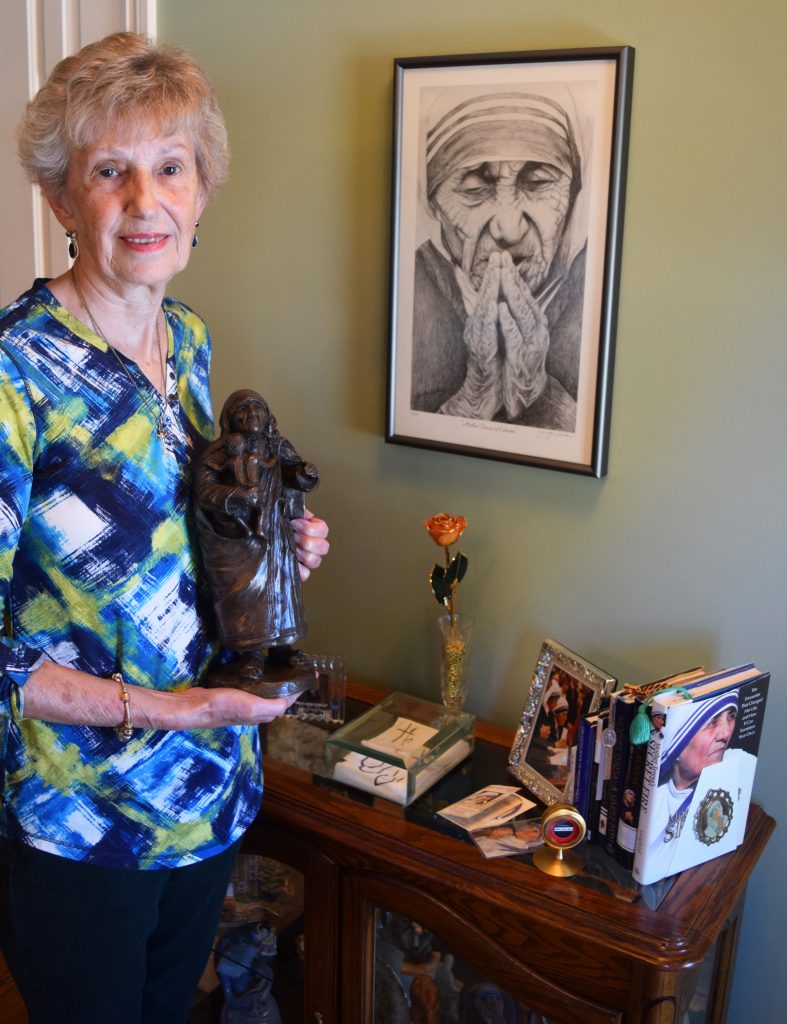 Carol Donton with her home shrine to Mother Teresa in Edwards. (The Catholic Post/Tom Dermody)

EDWARDS — When visitors come to Carol Donton’s home, moments after being greeted by her smile, they are made aware of her love for newly canonized St. Teresa of Kolkata.

Just inside the doorway is a small shrine to the saint, with some of the treasured pieces made possible because Mrs. Donton’s son is Father Joseph Donton, now pastor of St. Malachy Parish in Rantoul and St. Elizabeth, Thomasboro.

In the 1990s, however, Father Donton was administrative assistant to Bishop John J. Myers and later rector of St. Mary’s Cathedral in Peoria.  Those were years when Bishop Myers invited the Missionaries of Charity to serve in the cathedral neighborhood and included the visit of Mother Teresa to the cathedral on Dec. 10, 1995.

Mrs. Donton and her late husband, Victor, would occasionally assist the Missionaries of Charity at their soup kitchen.

“We got to know the Sisters and they started telling me about Mother, how she devoted her life to God and wanted to care for his poor people who are abandoned and forgotten about,” said Mrs. Donton. “I started reading about her and asking the Sisters more. She became a very important role model in my life to serve others.”

The shrine includes several books by or about Mother Teresa. But there are also one-of-a-kind treasures, including:

“When my son became a priest and went to the cathedral I said ‘I will never ask special favors of you,’” said Mrs. Donton. She asked to go back on her word when news came that Mother Teresa was about to visit. She asked for a seat in the cathedral and Father Donton said he could arrange it.

While she didn’t get to meet Mother Teresa personally, like all at the cathedral that day she received a Miraculous Medal, which is also part of her shrine.

“Just seeing her in person was like seeing a living saint,” said Mrs. Donton, recalling how the cathedral was overflowing with people on a bitterly cold day. “I was just aghast at the people who came, how far they drove, and how they stood outside the church.”

Mrs. Donton hopes those who see her display pause and say a prayer to Mother Teresa, who has answered her prayers, including after the death of her husband in 2003.

“She helped me through that difficult time in my life,” said Mrs. Donton. “I would pray to her and say ‘Help me get through this day,’ and she would. I always knew in my mind she would be canonized a saint some day.”