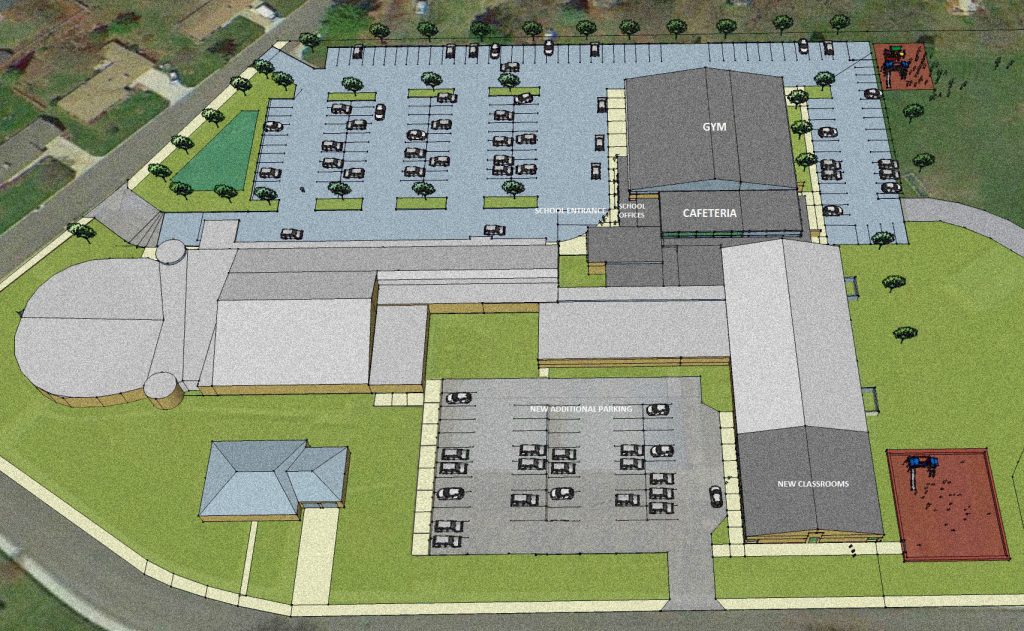 A new gymnasium and cafeteria, school entrance, and additional classrooms are the goal of a $5.25 million capital campaign being launched at Blessed Sacrament Parish in Morton this weekend. (Sketch by PCM + Design Architects, East Peoria)

MORTON — A $5.25 million capital campaign is being launched at Blessed Sacrament Parish here this weekend seeking pledges to fund several improvements at the parish school.

“Bringing to Completion the Good Work Begun” is the theme of the campaign, which will cap more than a decade of expansion and updating of the parish’s facilities. Presentations are planned in the parish hall after all Masses Aug. 27-28, with case statements and a letter from Msgr. Gerald Ward, pastor, mailed to all households the following week.

Plans call for a new gymnasium to replace the current one built in 1957, as well as a music room and cafeteria. In addition, a distinct school entrance will be created for safety and security, four new pre-K and kindergarten classrooms built and a new parking lot and playground added on the south side of the campus.

“Blessed Sacrament Parish has taken several steps toward providing for the needs of our current community and future growth,” said Msgr. Ward. Among those steps since 2005 have been three phases of updates, including school additions and renovations, construction of a parish center, and a major renovation of the church completed in 2009 for the parish’s 50th anniversary.

Msgr. Ward credited his predecessor, Father Mark DeSutter, for spearheading those projects, “and now we have the privilege of seeing it to completion.”

Campaign materials include supportive messages from Bishop Daniel R. Jenky, CSC, and Dr. Sharon Weiss, superintendent of Catholic schools for the Diocese of Peoria, as well as a campaign prayer to be offered at weekend Masses.

To make room for the new gym, the original school building and gym will be demolished. When the school was opened in 1958, there were 141 students. This year the school has enrolled 244 students in pre-K through eighth grade.

“The legacy that we will be leaving to future Blessed Sacrament families will allow them to raise and educate their children in a school where Christ and Catholic values are at the center of that education,” said Eric Wilson, one of four general chairs of the campaign along with his wife, Elizabeth, and Brian and Michelle Dennison. “They will have facilities that are safe, welcoming, and topof the line. This will continue to attract parents to send their children to Blessed Sacrament.”

Assisting in the planning and fundraising were a new facilities building committee and a 24-member “campaign cabinet.” Mike Birdoes is school principal, and Anthony Schenk of the Steir Group is serving as campaign counsel.

A successful campaign may result in construction beginning after dismissal of school in May of 2017, with students in the new building at the beginning of school year 2018-2019.