They come to the window of Sophia’s Kitchen for a meal every day, but the couple who attended the Sophia Sunday celebration on July 17 saved all week to buy the pork chop sandwiches, baked beans and chips that were being served.

“They said it was their one chance to give back,” according to Claire Crone, director. As many as 700 people are fed each day at Sophia’s Kitchen, which operates out of the parish hall at St. Joseph Church in Peoria.

The fundraiser gave many people an opportunity to see the new Spiritual Center at Sophia’s Kitchen for the first time. The renovation created a clearly defined area where patrons can come inside and eat, as well as talk to one of the permanent deacons and their wives who volunteer there three days a week or Father Jim Pankiewicz, chaplain. They will be joined on a full-time basis by Sister Merlinda Marcos, FAS, in August. 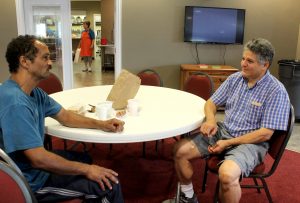 During the oppressive heat of the last two weeks, the Spiritual Center has doubled as a cooling center for those who need an escape from the soaring temperatures.

The construction also provided an office for Crone and badly needed storage space.

“The Spiritual Center was a logical progression of this incredible ministry that began with the simple generosity of the Franciscan Friars, who were trying to feed the hungry that came to their back door” at Sacred Heart Church in Peoria, said Msgr. Stanley Deptula, who is now pastor at Sacred Heart, St. Joseph, and St. Bernard, and rector of St. Mary’s Cathedral.

Sophia’s Kitchen was established when the Sandwich Program moved from Sacred Heart to St. Joseph in 2010. It is named for Sophia Donald, who died tragically when she was 3.

Msgr. Deptula cited the generosity of the community and the ministry of the deacons who responded to his call for assistance, for making the kitchen more than a kitchen.

“Now the hungry can come and get their body fed and their spirits fed,” he told The Catholic Post. “The whole building is at the service of the hungry.”

A PLACE TO RELY ON

“Sophia’s spirit, her memory is very much alive in her family and friends who have taken an unspeakable tragedy and brought joy to an awful lot of people,” Msgr. Deptula said.

Barry Donald, Sophia’s father, said the annual fundraisers are usually conducted through a letter-writing campaign, but they wanted to do something different this year. 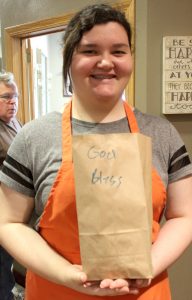 “We just wanted people to see what their money was going for,” he said. “And we wanted them to know how proud we were. Sophia’s name is on the wall and her picture is inside. It’s our pride and joy.”

Donald thanked the volunteers who come every day and said it was important for him and his wife, Vicky, and their family that they do. He also expressed his gratitude for Crone and “the great job she does in running it.”

Among the new volunteers are Deacon Marty Pogioli of St. Joseph in Pekin and Deacon Rick Miller of Blessed Sacrament in Morton, and deacon candidate Ed Mallow of St. Thomas the Apostle in Peoria Heights. They serve as a “tag team” on Wednesdays at the Spiritual Center.

Deacon Pogioli said the patrons are looking for “A smile. Some warmth. Somebody to treat them with respect and dignity.”

“I describe the job as a combination of Walmart greeter and chaplain,” he said with a smile.

“There’s a simple Bible verse — ‘Whatsoever you do to the least of my brother, that you do unto me,’” added Deacon Miller. “So there’s a sense in doing some service that’s needed you’re placing yourself in the presence of God also and that’s not a bad place to hang out.”

Crone said the need at Sophia’s Kitchen has increased. The prolonged state budget crisis forced some other food pantries and soup kitchens in the area to close, but it has raised awareness of poverty in Peoria.

“I think there’s a huge desire in figuring out how to end it,” she said, adding her dream is that Sophia’s Kitchen will not be needed someday.

In the meantime, she takes comfort in knowing that “Martha,” who uses a wheelchair, has a place to come where she can sit and talk to other people and “Cliff” will be able to keep his kids out of foster care because he can feed them.

“I’m not going to solve poverty, but I know I’m making a difference in these people’s lives,” Crone said. “They have a place they can come and rely on.”