That’s according to the two people who know Father Pica best – his parents, Jerry and Jane Pica (pronounced PEEK-a) of Champaign.

“He’s always smiling. He’s very helpful,” said Jerry Pica, a physical therapist in whose footsteps Father Pica had planned to follow until he felt the call to the priesthood while studying health science at Bradley University in Peoria. 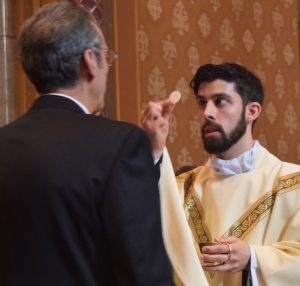 Father Pica gives Communion to his father, Jerry, a member of Holy Cross Parish in Champaign. (The Catholic Post/Tom Dermody)

“He spends of lot of time praying,” continued Mr. Pica. “Things may happen during the day, but he’s always got to get his prayer time in.”

The Picas spoke with The Catholic Post as their newly ordained son was giving blessings to a long line of well-wishers during a reception that followed the ordination Mass at the Spalding Pastoral Center in Peoria.

“He doesn’t want to be called ‘Mike,’” said Mrs. Pica. “It will be Father Pica or Father Michael,” she said, adding that he wouldn’t mind being called “Padre Pica.”

Father Pica loves playing soccer and, when hungry, likes nothing better than cheese ravioli. His favorite is his Grandma Pica’s family recipe.

The Pica family — Father Pica is the second to the youngest of five boys — watched the ordination Mass from the front pews of St. Mary’s Cathedral. Asked for the most memorable moment, Mr. Pica said it was witnessing their former pastor at Holy Cross, Champaign — Father Stephen Willard — assist their son with his new priestly vestments immediately after ordination.

“And receiving Holy Communion from him,” he added.

Mrs. Pica did have one word of caution for his new parishioners.

“He never gets to places on time,” she said. So perhaps he may be a bit late for that men’s club or Altar and Rosary Society meeting. But Masses? He won’t be late for those, assured Mrs. Pica.