Father Michael P. Pica was ordained to the priesthood by Bishop Daniel R. Jenky, CSC, during solemn, ancient rites in a joy-filled Mass at St. Mary’s Cathedral in Peoria on Saturday, May 28. 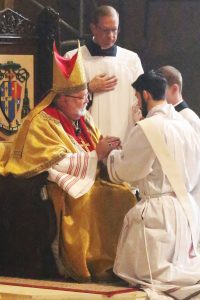 “The church in Peoria rejoices today,” said Bishop Jenky in opening remarks after Deacon Pica entered in a processional including priests, deacons and seminarians of the diocese. The final strains of the robustly sung hymn “O God, Beyond all Praising” were still echoing throughout the newly renovated cathedral, punctuating the bishop’s remarks.

“We rejoice with Michael’s family and his many friends,” continued Bishop Jenky. “The deacons of the diocese, the religious, and the faithful all rejoice. But in a special way, the priests of this diocese on this day remember our own ordination and ask the Holy Spirit to renew his gifts in our lives and our ministries.”

Father Pica, 27, the son of Jerry and Jane Pica of Champaign, has been assigned as parochial vicar of St. Patrick Church of Merna Parish in Bloomington and St. Mary Parish, Downs. (Related story: Parents say parishioners should expect a smiling, prayerful “Padre Pica.”)

In his homily preceding the ordination rites, Bishop Jenky called on the priesthood candidate to carry out the ministry of Christ “with constant joy and genuine love, attending not to your own concerns but to those of the Lord and those you serve.”

The bishop challenged Father Pica to imitate the good example of “the many priest heroes who came before you and labored so hard to build up the Holy Church of Peoria.” He cited the missionary zeal of Father Jacques Marquette, the heroic martyrdom witness of Father Gabriel de la Ribourde, the “determined energy” of founding Bishop John Lancaster Spalding, and the “manifest holiness” of Venerable Archbishop Fulton J. Sheen, among others.

Bishop Jenky repeatedly addressed Father Pica as “my spiritual son” or “my dear son Michael” as he urged him to carefully consider the nature and the sacred duties of the priesthood.

Deacon Pica was presented to Bishop Jenky for the Order of the Priesthood by Father Patrick Henehan, diocesan vocation director of formation. After his acceptance by Bishop Jenky, Deacon Pica faced the assembly — including dozens of representatives from communities of women religious — and received sustained applause. 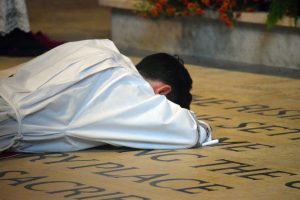 Priesthood candidate Deacon Michael Pica prostrates himself on the cathedral sanctuary floor while the assembly chants the Litany of the Saints. (The Catholic Post/Tom Dermody)

The Rite of Ordination included Deacon Pica making a series of resolutions, including promising respect and obedience to Bishop Jenky and his successors. As the assembly called upon the help of the saints by chanting the Litany of the Saints, the priesthood candidate prostrated himself on the sanctuary floor for several minutes.

Father Pica knelt before the bishop several times, including for the laying on of hands, the anointing of his hands with Sacred Chrism, and the presentation of his chalice. Priests from throughout the diocese twice processed into the sanctuary to greet him — first to prayerfully impose their hands and later to embrace him in a sign of peace.

After being assisted with his priestly vestments by Father Stephen Willard, his former pastor at Holy Cross Parish in Champaign, Father Pica joined Bishop Jenky and priests of the diocese at the cathedral altar for the Liturgy of the Eucharist.

The offertory gifts were presented by cousins of Father Pica.

Providing music for the ordination liturgy was a combined choir with organ and brass accompaniment. The choir, directed by Greg Etzel, included members of the Cathedral Schola, the Pueri Cantores, and choir members from Immaculate Conception Parish in Monmouth.

At the conclusion of the Mass, Bishop Jenky knelt to receive Father Pica’s first blessing. The two of them then blessed the assembly.

There were many more blessings to come for Father Pica as well-wishers lined up to receive the blessing of the new priest at a reception that followed at the Spalding Pastoral Center.

EDITOR’S NOTE: More photos from the ordination Mass have been posted to The Catholic Post’s site on Facebook.