Why Brittney Morales will walk 3,000 miles for pro-life cause this summer 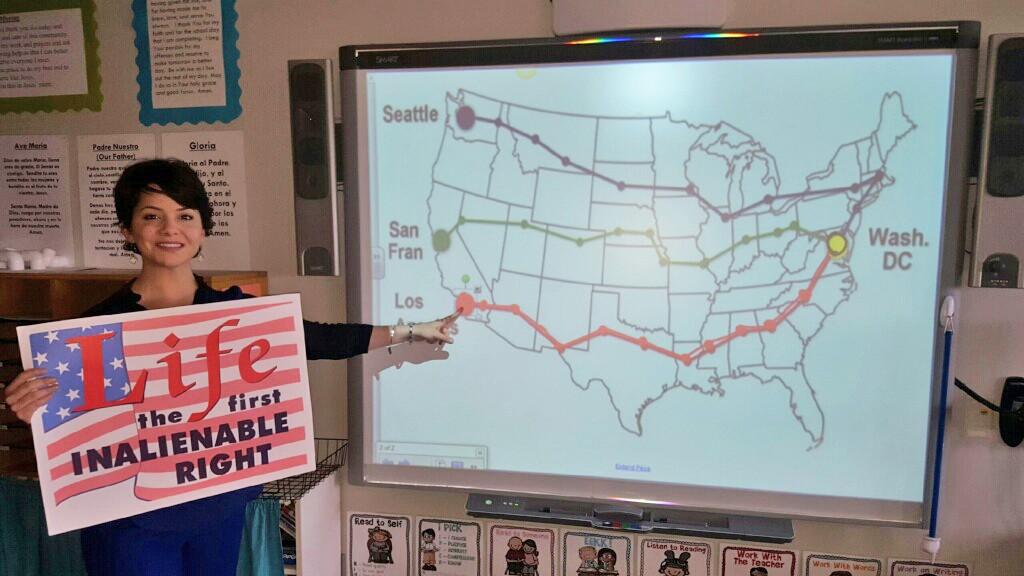 Brittney Morales of St. Philomena Parish in Peoria shows the southern route across the United States she will walk this summer as part of the Crossroads pro-life mission. (Provided photo)

At 28, Brittney Morales knows that people her age are targeted by a culture that promotes a contraceptive mentality and casual attitude toward abortion. She is committed to fighting that, even if it means walking 3,000 miles this summer to prove it.

Morales, an active member of the young adult group at St. Philomena Parish in Peoria, will travel to Los Angeles in May and begin to walk through the southern United States as part of Crossroads. The organization was founded in 1995 by Steve Sanborn, a student at Franciscan University of Steubenville, Ohio, in response to St. John Paul II’s call for youth to take an active role in establishing a culture of life.

HOW YOU CAN HELP

To enable Brittney Morales to participate in the Crossroads walk, she hopes to raise $2,500 to cover her expenses while on mission over the summer. Those who would like to help her and track her progress on the road may visit plumfund.com/charity-fundraising/Walk4Life.

Once she has reached her goal she will recommend two or three pro-life organizations people can support if they wish to continue to support pro-life work in central Illinois and beyond.

“While financial support for this endeavor is important, prayer is just as important,” Morales said, promising to return that prayer support.

The trek, which will end with a rally on Aug. 13 in Washington, D.C., is expected to take about 12 weeks. She expects to be walking from sunrise to sunset every day, stopping only on weekends to pray in front of abortion centers and give talks to various groups along the way.

“There’s a beauty and something very special about people being vocal and visual about the pro-life conviction, but even more so when the youth that is so targeted by the abortion industry can be out there to stand up for life. It makes the message so much more prominent,” said Morales, who is completing two years of service as a counselor at a pregnancy center in Peoria.

OFFERING SELF FOR MISSION

Crossroads has mapped out three routes for participants, with walks also planned for the north and central United States. (See crossroadswalk.org)

A native of Lake Forest, Morales said she wanted to see another part of the country. There is an even more important reason she chose the southern route, however.

“I want to offer up myself as much as possible on this walk, so if that means uncomfortable and excruciating heat in the middle of summer, I want to do that,” she told The Catholic Post. “I want to go big on this. I want to offer myself up for this mission.”

Morales and her companions will be praying multiple rosaries as they walk, as well as attending daily Mass. She said that in addition to praying for those in the pro-life movement, she feels called to pray in a special way for those working in the abortion industry and their change of heart.

She admits that there was a time in her life when she wasn’t so devoted to her faith or the rosary, despite being raised in a Catholic home. Graduating from the University of Illinois in 2010 with a degree in communication and Spanish, Morales was planning to work in radio or television, “but the Lord had other plans.”

She worked as an English teacher in Madrid, Spain, for two years as an employee of the Ministry of Education. While she was there, she noticed that there were very few young people at Mass so she started a Bible study for other “ex-pats” like herself.

Before she left they made a pilgrimage to Fatima. She said three or four “virtuous young men, dear friends of mine” in the group taught her to pray the rosary and “I fell in love with it. I started praying the rosary every afternoon.”

Morales said she often did this at a park in the middle of Madrid so that people would see a young person praying.

“I want to offer up myself as much as possible on this walk, so if that means uncomfortable and excruciating heat in the middle of summer, I want to do that. I want to go big on this. I want to offer myself up for this mission.” — Brittney Morales

When she returned to the United States, Morales moved to Peoria for a job that didn’t pan out. At the suggestion of Annie Ombrello, then campus minister at St. Joseph Newman Center at Bradley University, she applied to be a counselor at a local pregnancy center. Helping the women there choose life for themselves and their babies has brought her “the greatest joy in my life.”

“Abortion is the most unnatural thing a woman can do. By nature, we’re made to give life,” Morales said. “A lot of times the woman hasn’t given herself the opportunity to process what’s going on, to make the connection, to say, ‘I can (carry this child to term). I want to do this.”

The road ahead seems daunting, but she isn’t worried.

“Because I have discerned about it so much and because I have really given myself as a tool for the Lord to use me in this mission, I’m at peace,” Morales said. “Total trust.”