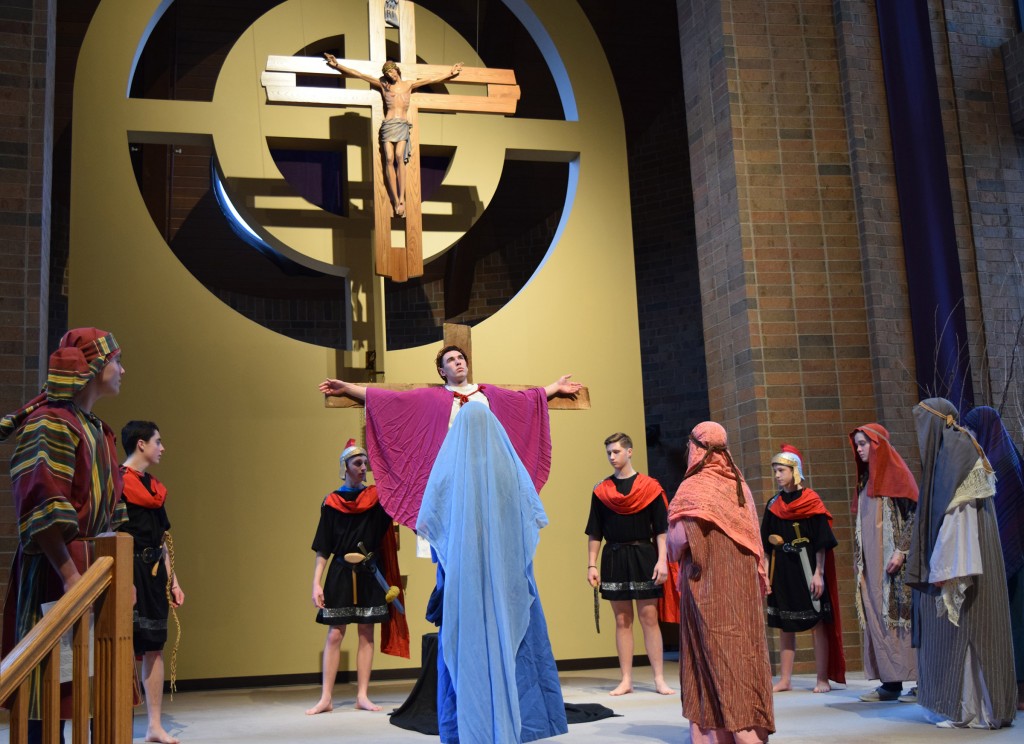 The cast of the Living Stations of the Cross rehearse a scene in the sanctuary of St. Malachy Church in Geneseo. The annual performance is scheduled for 8 p.m. this Sunday, March 13, in the church. (The Catholic Post/Tom Dermody)

Rachel Sears’ brother was Jesus, too.

And so it goes in what has for decades been a Lenten tradition at St. Malachy Church in Geneseo — a dramatic portrayal of the Living Stations of the Cross presented by the parish’s high school youth group. 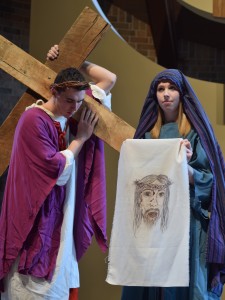 The Sixth Station is depicted by Ryan Hartsock as Jesus and Katie Kibler as Veronica. (The Catholic Post/Tom Dermody)

A cast and crew of about 25 students, guided by longtime director Joseph DePauw, are in the final stages of preparation for the 2016 production, scheduled for 8 p.m. this Sunday, March 13, at the church, 595 E. Ogden Ave. There is no admission charge or ticket reservation required.

“It helps a lot of people get in the mood for Palm Sunday and Easter,” said Sears of the always well-attended portrayal of Jesus’ steps to the cross. She and Hartsock are both seniors at Geneseo High School and are in their fourth year as cast members. Hartsock also portrayed Jesus a year ago, while Sears had the role of Veronica.

“It’s neat to give the people a good representation of what happened to Christ,” said Hartsock, a multi-sport athlete at his school.  “When I’m getting nailed to the cross or having the crown of thorns driven into my head, I try to imagine what it would be like for that to really happen, how much it would really hurt, and I try to portray that.”

The production opens with three prelude songs — “Everything to Me,” “Mary, Did You Know?” and “Watch the Lamb” — and ends with the singing of “Via Dolorosa” and “El Shaddai.” With the music, the Living Stations last but an hour, though the emotional and spiritual impact can carry through the holiest days of the church year.

“A lot of people use it as their beginning to Holy Week, even though it’s a week before Palm Sunday, to put them in that mindset,” said DePauw, who directs musicals for Geneseo High School as well as Richmond Hills Players. He told The Catholic Post many students in St. Malachy’s Living Stations are also active in theater at the high school.

DePauw has been involved with the Living Stations dating back nearly to the parish’s move to its new church in 1989, but the tradition pre-dates that by several years. 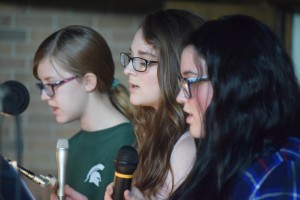 Rachel Vondra, Caroline Bergren and Laren Kass sing “El Shaddai” at the close of the Living Stations of the Cross. (The Catholic Post/Tom Dermody)

Over the years some aspects have changed, including the addition of the prelude music, but the focus remains on providing a visual of the 14 Stations of the Cross while a powerfully reflective narration is read by students from the choir area, where they also serve as vocalists.

The actors, dressed in costume, are usually motionless when the lights come up, though this year’s production allows for limited movement. Simon of Cyrene, for example, portrayed by Ryan Ganson, takes a few steps as he helps Jesus carry the cross. A freshman at Black Hawk College, Ganson’s vocal and acting skills are particularly showcased in the “Watch the Lamb” performance that precedes the first station.

“The kids have enjoyed it,” said Lance Carroll, youth minister at St. Malachy’s who serves as assistant director and works with the musicians. “It’s something they can do for the community that wouldn’t be there if they weren’t the ones doing it.” 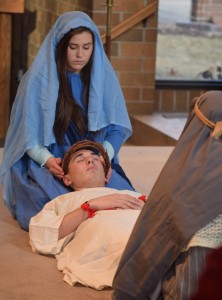 Mary (Rachel Sears) holds the body of Jesus (Ryan Hartsock) taken down from the cross. (The Catholic Post/Tom Dermody)

While the performance is free of charge, Carroll said donations are accepted to St. Malachy’s College Scholarship Fund, which awards $500 to two graduating seniors.

Noah Samuelson, a home-schooled senior who provides piano accompaniment, says that while rehearsals may include typical lighthearted banter between scenes, “once we do the real performance, and all the lights go down, the whole atmosphere gets to you.”

“It helps you feel what the people there might have felt while it was actually happening,” added Samuelson, also in his fourth year with the production.

“It’s a solemn evening because of the content of what we’re doing,” said DePauw. The students are asked to continue in appropriate seriousness when patrons, especially children, greet them and ask questions following the production.

“These are such great kids,” said DePauw, “that by the time we get to that evening they don’t need us. They know what they’re doing.”

EDITOR’S NOTE: Additional photos from the rehearsal performance have been posted to The Catholic Post’s site on Facebook.