Editor’s note: Following is the full text of the homily from the Feb. 15, 2016 funeral Mass at Sacred Heart Church in Rock Island for Father Johnjoseph DePorres “Jerry” Logan. The homilist was Father Michael Schaab. 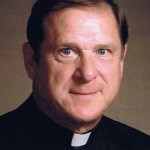 When Father Logan and I were stationed together, it sometimes occurred on Saturdays that I would be scheduled to follow him in the confessional as a Confessor. Often on those occasions I would discover a pile of his books. And, if the number of penitents was few, I would take my time in examining the selections he had made for that day.

He loved books and he wished to have read at his funeral a selection from Charles Dickens’ “A Tale of Two Cities” — the same selection he read at his mother’s funeral in this church some five years ago.

A TALE OF TWO CITIES — Chapter 3: The Night Shadows

Something of the awfulness, even of Death itself, is referable to this. No more can I turn the leaves of this dear book that I loved, and vainly hope in time to read it all. No more can I look into the depths of this unfathomable water, wherein, as momentary lights glanced into it, I have had glimpses of buried treasure and other things submerged. It was appointed that the book should shut with a spring, for ever and for ever, when I had read but a page. It was appointed that the water should be locked in an eternal frost, when the light was playing on its surface, and I stood in ignorance on the shore.

My friend is dead, my neighbour is dead; it is the inexorable consolidation and perpetuation of the secret that was always in that individual, and which I shall carry in mine to my life’s end.

In any of the burial-places of this city through which I pass, is there a sleeper more inscrutable than its busy inhabitants are, in their innermost personality, to me, or than I am to them?

I find myself today focusing on the last sentence of that quotation: “In any of the burial-places of this city through which I pass, is there a sleeper more inscrutable than its busy inhabitants are, in their innermost personality, to me, or than I am to them?”

I focus this way because Father Logan exemplified what Dickens meant when he described all of us, not only as “inscrutable” – impossible to understand – but also as a “profound secret and mystery to every other” person.

So we come today to bury a “mystery.”

A mystery has three levels and the first level is contradiction. I knew Father all his ordained life and witnessed many contradictions. Some were gradual – the progressive became the traditionalist. Some were surprising – Father Jerry one day and Father Johnjoseph the next. Some were predictable, like when he arrived at St. Columba’s in Ottawa, his first assignment, in 1979 with all his possessions in a small van, including his ever present companion, his dog Fred; as compared to his arrival at St. Pius X here in Rock Island in 2011, some 33 years later, when he needed several trips with a commercial delivery truck to fill not only his rectory living space and the parish garage, but also his family home. And some contradictions repeated themselves, like between illness and good health.

Through everything, Father Logan resolved always to be a dedicated priest and a kind human being. He was dedicated to prayer, to healing (both body and soul), to the sacredness of all life, to ministry, to his family, to his friends, to Mary the Mother of God, to Christ in the Eucharist and to all who came to him in need. His kindness was often manifested in personal gift giving; his dedication often demonstrated in his preaching and teaching. With Father Logan, the last were always first. He enabled so many of us to be better because of his kindness and dedication.

I often marveled how in the midst of his own health issues he would march in Washington, start a new ministry in the Quad Cities, encourage others with his support and involvement and, with uncanny accuracy, show up in persons’ lives when they were most in need.

And there is a third level of Mystery called revelation. Dickens spoke of a “secret.” Revelation is that which reveals the secret hidden by the mystery. It’s the source of all mystery. It is the most profound contradiction: “Anyone who believes in me, even though that person dies, will live, and whoever lives and believes in me will never die.” To accept the mystery of Father Logan, we have to accept the mystery of Christ. To be able to find resolution to our grief, we must accept the revelation of the crucified Christ who is Resurrection and Life. We have to take on the task that Father Logan has lived. We have to take on the mind of Christ.

Really, all of us are mystery – contradiction, resolution, revelation – and it’s not easy. It wasn’t for Father Johnjoseph/Jerry and it’s not for us. It takes God’s grace and our cooperation.

Father prayed for that grace and we do, also, for him and for ourselves.

The Trappist, Father Thomas Merton, a notable mystery himself, left us a prayer I find consoling for those of us struggling to be mystery in all its fullness.

I have no idea where I am going.

I do not see the road ahead of me.

I cannot know for certain where it will end.

Nor do I really know myself,

And the fact that I think I am following your will

does not mean that I am actually doing so.

But I believe that the desire to please you

does in fact please you.

And I hope I have that desire in all that I am doing.

I hope that I will never do anything apart from that desire.

And I know that if I do this you will lead me by the right road,

though I may know nothing about it.

Therefore I will trust you always though

I may seem to be lost and in the shadow of death.

I will not fear, for you are ever with me,

and you will never leave me to face my perils alone.

May we only add to that: “Eternal rest, grant unto him, O Lord. And let perpetual light shine upon him. May he rest in Peace. May the soul of Father Logan and the souls of all the faithful departed rest in peace. Amen.”