CHICAGO — Frigid temperatures were no match for the warm hearts more than 5,000 people from across the Midwest brought to March for Life Chicago on Jan. 17. Among them were many “ambassadors of the pro-life cause” from the Diocese of Peoria. 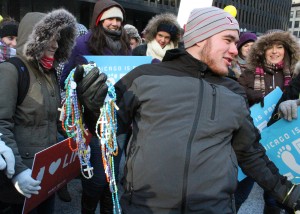 Josh Martel from the St. John Paul II Catholic Newman Center in Normal makes sure everyone has a rosary who wants one prior to March for Life Chicago. The Catholic Post/Jennifer Willems

Shirley Plaag, coordinator of the Office of Evangelization and Faith Formation, and Father Jacob Valle, parochial vicar at St. Philomena Parish in Peoria, led the diocesan pilgrimage. The day included an opportunity to walk through the holy door for the Year of Mercy at Our Lady of Sorrows Basilica in Chicago, where the pilgrims attended one of the regular weekend Masses.

On the way home, they stopped for dinner at Annunciation Byzantine Catholic Church in Homer Glen. Following the meal Father Thomas Loya, pastor, took them into the church to talk about the meaning behind the icons, most of which he painted.

“Everywhere we went we were ambassadors of the pro-life cause,” said Father Valle. He called March for Life Chicago “a lively celebration of life” and said it was amazing to see how events like this have evolved from being political protests to expressions of love and joy.

Emily Zender, president of March for Life Chicago and executive director of Illinois Right to Life, focused on the same themes as she welcomed the people who filled Federal Plaza.

“We know why we gather here. We gather here because 56 million children’s lives have been ended,” she said. “As you take a moment of silence, I’m going to ask that you call to mind love — love for the unborn children, love for those in the abortion industry who will wake up tomorrow and do it all over again, and love for those hurting from abortion and for each one here today.”

It was God’s love and boundless mercy that helped Jessica Lauer heal after her abortion. During her personal testimony she talked about how being a mother at 19 hadn’t been part of her plan, so she had an abortion when her daughter was 12 weeks old.

She called it the “deepest regret and greatest sin” of her life. 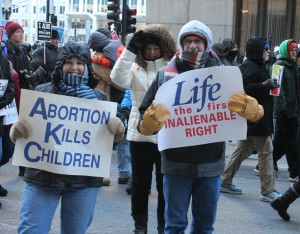 Minda and Deacon Robert Rodriguez of Galesburg traveled to Chicago with a group from Knox County Right to Life. The Catholic Post/Jennifer Willems

Being able to share her story is one way “God can sanctify and bring good out of an evil situation,” Lauer said. “I also experienced how one little girl, one tiny eternal soul, can change all of history.”

“Pro-life continues to impact my plan and I’m now very thankful for that. I wouldn’t be the woman you see before you if it weren’t for love of my daughter,” she said. “I challenge you to let mercy penetrate your plans and see where it leads you.”

Those gathered for the rally before the march were also challenged to promote adoption — especially adoption of children with special needs — by Dan Kulp, a comedian, actor and author of “Confounding the Wise.” In addition he is the father of four, including adopted children with Down syndrome and spina bifida.

“While almost every abortion that takes place takes place out of convenience, I want you to not be guilty of not adopting a child out of inconvenience,” he said. “Do not pass on the joy of adoption because it would be an inconvenience. Let’s show them just how far we’re willing to take the ball!”

Archbishop Blase Cupich of Chicago urged march participants to “make space for young people to come into the world, to realize that the womb should not be their tomb, that their lives matter and we should make room at the table for them, each and every child that has been given life by God.”

He also reminded them that “the coldness of death is not what we’re meant for.”

“We want to make sure that even though it’s so very cold out here today, that there is warmth in our hearts — and should be for the entire world — for the unborn child.”

Participants also heard from Melissa Ohden, an abortion survivor, and Rev. Corey Brooks, pastor of New Beginnings Church in Chicago, who put Planned Parenthood on notice for placing 62 percent of its facilities within a two-mile radius of neighborhoods with high African-American populations.

“No longer will we stand on the sideline and let these abortions happen in our community and babies go unborn,” he said. “We’re going to take a stand and that stand starts right now.”

In addition to Illinois Right to Life and the Archdiocese of Chicago, the presenting organizations for March for Life Chicago include the Catholic Conference of Illinois.

“The cold weather allowed us to offer something more than just a manifestation of our beliefs and our support for life,” said Sister Ana Pia Cordua, SCTJM, director of Catholic Charities of the Diocese of Peoria, who traveled with the diocesan pilgrims.

“It was sacrificial and that is so proper to our faith,” she said. “Christ’s sacrifice brought salvation. Our sacrifice, united to our Lord, can bring healing to the world.”

“I was really edified by the students’ desire. They didn’t think twice about it,” he said. “It was something concrete they could offer up to God.”

One of those Catholic Braves, sophomore Mary Rockwell, said she loved “cheering and just being joyful for life.”

“It’s good for people to see we’re not hateful, we’re not judgmental. We’re doing this out of love,” she said.

Brooke Happ, a special education teacher at Farmington High School who is still active at the St. John Paul II Catholic Newman Center at Illinois State University, said she was happy to be able to challenge the “culture of indifference.”

“It showed that we are not indifferent to what’s going on. We’re aware of the dignity and sanctity of the human person and we’re willing to stand up for that,” she told The Catholic Post.

She added that the number of young people she saw and their zeal filled her with the zeal to keep going.

“We young people have the capacity to change the culture,” Happ said. “We’re all in this together. We can show the world that life is valuable.”

It was the first March for Life for Mackenzie Gallagher, a freshman at Heartland Community College who is also involved at the St. John Paul II Catholic Newman Center. She said she was “grateful for the experience of being able to march, laugh, sing and dance for all those who will never get the opportunity to do so.”

“My heart goes out to all men, women, and children who have suffered from an abortion and I pray that they can find healing in God’s boundless mercy,” she said. 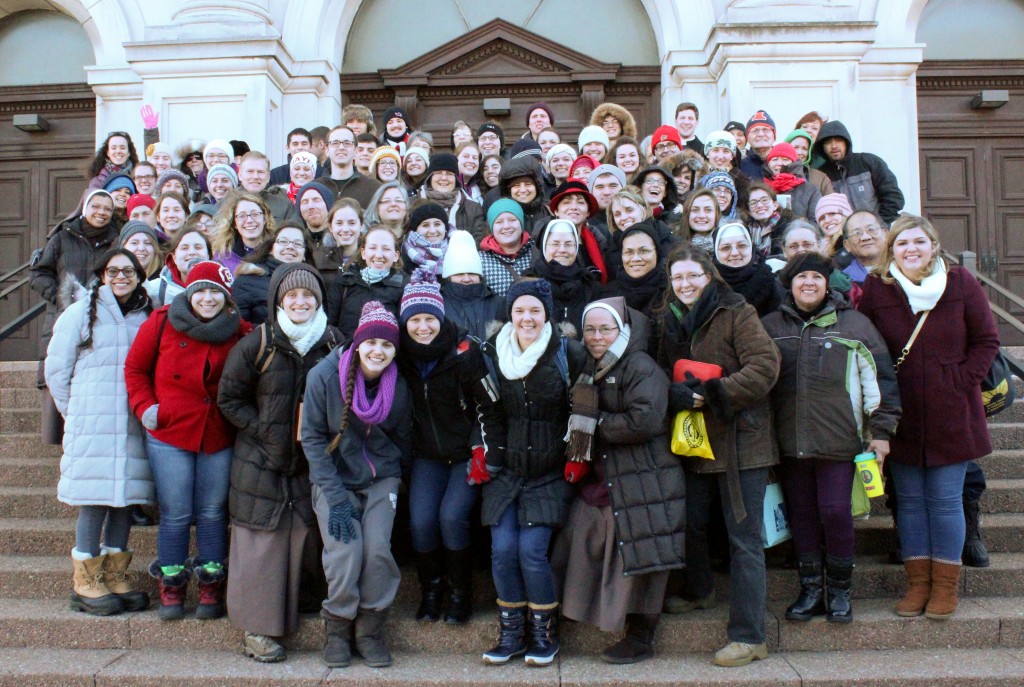 Those on the bus pilgrimage sponsored by the Diocese of Peoria are pictured on the steps of Our Lady of Sorrows Basilica in Chicago after Mass and lunch. The Catholic Post/Jennifer Willems

EDITOR’S NOTE: An album of photos of pilgrims from the Diocese of Peoria-sponsored trip to March for Life Chicago is found on The Catholic Post’s Facebook site.