Learning that he had amyotrophic lateral sclerosis came as a total surprise to Rapp, group president of the Resource Industries Group at Caterpillar Inc. in Peoria. There is no cure for the disease, which affects the nervous system and impairs physical function. 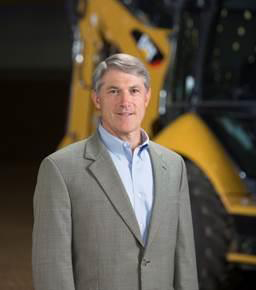 “Everyone is going to get a curveball at some point in life. My message is if you can have great balance in your life, you can hit that curveball,” says Ed Rapp, group president of the Resource Industries Group at Caterpillar Inc. (Provided photo)

While ALS still raises more questions than answers for doctors and patients alike, he is certain of two things: his faith and his family.

“I have never questioned my faith,” said Rapp, a member of St. Jude Parish in Peoria. “Some people say the good Lord did this because of needing to advance progress in ALS. I don’t look at it that way.

“I don’t believe that God did this to me, but I absolutely know he’s going to help me through it,” he told The Catholic Post during a frank discussion by telephone before he spent Memorial Day weekend with his wife, Ann, and their children and grandson. He calls time spent with the 16-month-old “a big part of my therapy.”

And despite the fatal prognosis of ALS, which is also known as Lou Gehrig’s disease, Rapp said things could be worse.

“Every day you hear about a car wreck or a heart attack or people that die suddenly who don’t get the chance to say what they want to say to the people who mean the most. With a disease like this I never would have thought it to be a possibility, but there is a glass-is-half-full part of this,” he said.

One of those opportunities to share what’s in his heart comes this Thursday, June 9, when he speaks as part of the “Sharing Our Faith” initiative at St. Jude, 10811 N. Knoxville Ave. Rapp’s presentation will begin at 7 p.m.

There is no charge to attend, but tickets are required and space is limited. To request tickets, email  sharingourfaith@stjudecatholic.com. (Editor’s update — The parish reported June 7 that no seats remain for the presentation.)

Rapp credits the way he was raised in central Missouri for his outlook on faith, family and work — and the need for people to strike a balance between their personal and professional lives.

Even though Pilot Grove was a town of about 700 people, it was a very strong Catholic community that supported a Catholic school. St. Joseph School had four rooms, with two grades to a room, and Rapp remembers the teacher instructing students on one side for 30 minutes and then the other side for 30 minutes.

“Amazingly, that school is still up and running,” he said.

They attended Mass each morning before school, so Rapp grew up going to church six days a week.

With three older brothers and three younger sisters, he often complained to his mother that he was the neglected middle child. “With seven kids, you’re all neglected,” she replied.

“There was no neglect. It was a wonderful way to grow up,” Rapp said. “A family that loved you. A small community. Good values. We were really raised in a faith-based environment. I just never lost it.”

He studied finance at the University of Missouri, but knew he didn’t want to go into banking. When a recruiter from Caterpillar Inc. visited campus, Rapp was intrigued by the global nature of the business. Told that if he applied himself he could see the world and get paid doing it, he went to work as a pricing analyst for Cat in 1979 and nearly 37 years later is one of the highest ranking executives at the company.

In addition to Peoria, the Rapps have been posted to California and North Carolina, as well as South Africa, Switzerland and Singapore.

One of the reasons they’ve been able to balance work and family so successfully is because finding a local parish and getting involved has been part of “unpacking our bags” wherever they’ve lived.

“The principle I always pushed at Cat as people moved around the world is unpack your bags . . . like you’re going to live there the rest of your life,” he said. “Fully embrace the local culture. Fully embrace the opportunities to see things you never dreamed you’d be able to see.” 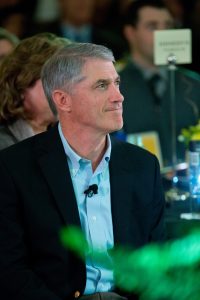 “I don’t believe that God did this to me, but I absolutely know he’s going to help me through it,” says Rapp. (Provided photo)

In Geneva, Switzerland, for example, Ed and Ann taught religious education at St. John XXIII, the parish for English-speaking Catholics, for seven years. He was on the team to prepare students for confirmation, including two of his own children, for two years.

While his growing responsibilities at Caterpillar made that level of involvement difficult when he returned to Peoria in 2007, Rapp worked with Father Patrick Henehan, pastor at St. Jude, to plan for construction of St. Jude School. Posted to Singapore in 2012, he and Ann have helped with various projects at the school since coming back to central Illinois in January 2015.

“I want other young people to have the opportunities I do,” he said simply.

“I’m just so proud of what they’ve created over there — the type of learning environment, the faith-based learning that it provides,” Rapp told The Post. “I think it’s a wonderful place for young families to have their kids educated.”

When he speaks at St. Jude this week, he hopes to encourage those young families and parishioners to get engaged in their church and school. Protecting the family structure — especially family dinners with no distractions from cellphones or television — also can provide an environment that fosters growth in values and faith, and helps people to face adversity.

“Everyone is going to get a curveball at some point in life. My message is if you can have great balance in your life, you can hit that curveball,” Rapp said. “Don’t wait until you have to deal with adversity. Find that balance and use it as you go through life.”

In his case, that meant acknowledging that ALS was going to take him out of future opportunities with Caterpillar and stepping down so the next generation of leaders could step up. He is transitioning from his job — Rapp will retire officially on July 1 — and focusing on the next challenge in his life.

He continues to travel and still sits on two corporate boards. A move to North Carolina is on the horizon.

He also is engaging with the ALS community and working to connect neurologists and data scientists so the disease can be understood better. In addition, Rapp has established a charitable fund, “Stay Strong vs. ALS,” to make sure the work continues. (See staystrongvsals.com)

Prayer and affirmations remain a part of his daily routine as he places himself in the hands of God, trusting that God will look out over him and his family.

Rapp also takes comfort in the fact that he has no regrets about his life — something he says with great humility.

“Ann and I just celebrated our 33rd wedding anniversary. We have a wonderful relationship. I love my kids, my grandson, my daughter-in-law,” Rapp said. “I feel good about where we’re at and I think that’s really the message.”