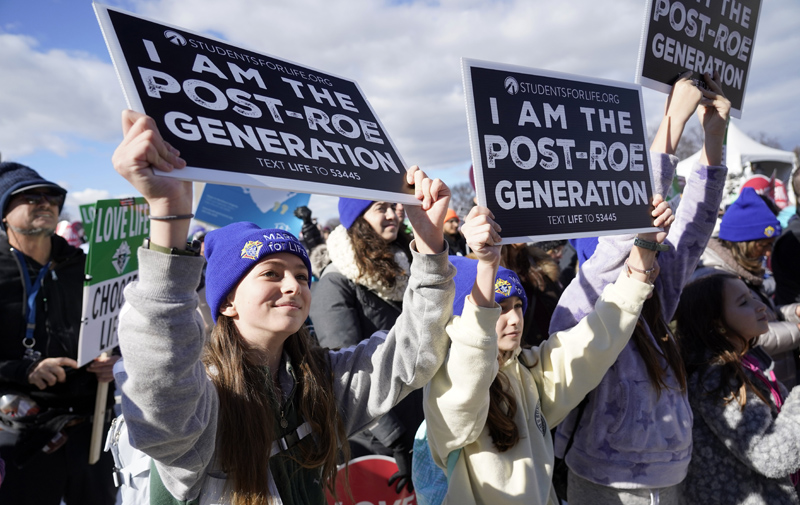 Pro-life advocates gather for the 50th annual March for Life in Washington Jan. 20. Among them were students from Peoria Notre Dame High School and Marquette Academy in Ottawa. (OSV News/Gregory A. Shemitz)

For decades, in the Diocese of Peoria and around the nation, the date Jan. 22 has been a rallying point for those promoting the sanctity of human life and honoring the tens of millions of lives ended by abortion since the 1973 U.S. Supreme Court decisions that legalized it.

Those goals remain, but the court’s overturning of Roe v. Wade last June means there has been a shift in some January pro-life activities.

For example, the National March for Life in Washington, D.C., continued for its 50th year. But the event — held Friday, Jan. 20 — did not draw the usual throng of pilgrims from Catholic high schools in the Diocese of Peoria.

Only Peoria Notre Dame and Marquette Academy in Ottawa organized trips to Washington for the national march and related activities. Notre Dame has chartered a bus for 55 pilgrims, while 11 students along with two priests and two chaperones from Marquette were to fly to D.C. on Jan. 18 for five days of prayer and touring of national sites.

“We are excited to continue Central Catholic’s tradition of peaceful pro-life witness while beginning a new chapter of local work.” — Lauren Booth, speaking about Illinois March for Life

Other high schools, such as Central Catholic in Bloomington, have opted to focus this year on the Illinois March for Life — formerly March for Life Chicago — which will now take place at the state capitol on March 21.

In a letter explaining the decision not to organize a trip to the national march for the first time since 2003, Central Catholic Assistant Principal Lauren Booth said that the Supreme Court’s decision overturning Roe means “our defense of life moves on to the state governments.”

“Our state has some of the most extreme abortion access of anywhere in the country and our voice and presence is needed here more than ever,” she wrote in a letter to Central Catholic seniors and their parents. “We are excited to continue Central Catholic’s tradition of peaceful pro-life witness while beginning a new chapter of local work.”

Meanwhile, in the Diocese of Peoria, a special Mass is planned for Monday, Jan. 23, the Day of Prayer for the Legal Protection of Unborn Children, at St. Joseph Church in Peoria. Father Bill Miller, pastor, will be the celebrant for the 6 p.m. liturgy.

Everyone is welcome, although parishes and schools around the Diocese of Peoria are encouraged to do something on the local level this year, according to Father Miller, who chairs the Diocesan Respect Life Board.

The change from a diocesan Mass near the Jan. 22 anniversary of Roe v. Wade to local Masses follows the Supreme Court ruling in Dobbs v. Jackson Women’s Health Organization last June. That decision overturned Roe v. Wade, but returned decisions regarding abortion to the states.

The Sanctity of Human Life Rally, sponsored by Central Illinois Right to Life, has been moved from its usual mid-January observance to Saturday, June 24, the anniversary of the Dobbs decision. It will take place at the Spalding Pastoral Center in Peoria.

A tradition that is continuing in Champaign is a community ecumenical memorial pro-life prayer vigil on Sunday, Jan. 22. “Life Wins! What Now?” is the theme for the event, to be hosted by Holy Cross Church, 405 W. Clark St.  It begins at 7 p.m. and features advocate and pro-life speaker Kristi Hofferber. A reception with beverages and desserts will follow.

The Champaign prayers took on added significance with the announcement that an Ohio-based physician plans to open a new abortion clinic on the city’s west side. It will reportedly operate under the name Equity Clinic at 2111 W. Park Court and is expected to begin accepting appointments in the coming weeks.