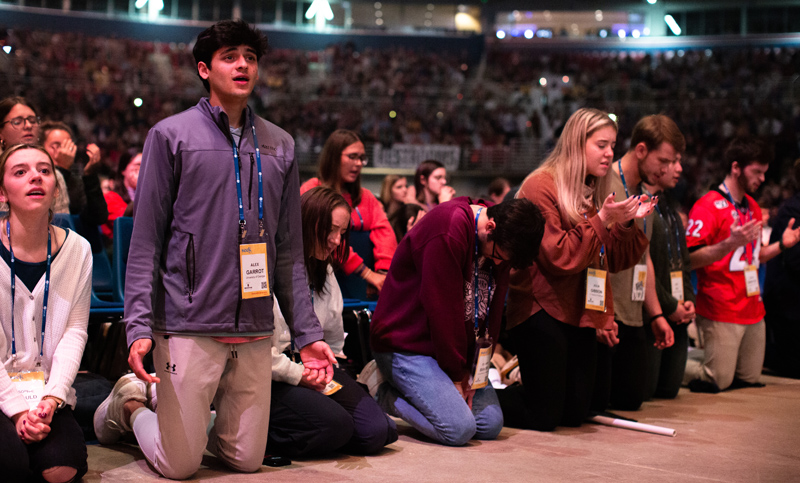 Participants kneel in prayer and praise during SEEK23, sponsored Jan. 2-6 by the Fellowship of Catholic University Students (FOCUS) at the America’s Center Convention Complex in St. Louis. (Provided photo/FOCUS)

“It was an incredible, powerful week.”

“I felt God’s presence in the Eucharist in a way I never had before.”

Those were just some of the reactions of university students in the Diocese of Peoria to being part of SEEK23, a five-day conference in St. Louis that invited 17,000 young adults to a deeper relationship with Jesus Christ and the Catholic Church as the new year began.

“Every day, God continued to show us His mercy, peace, and joy even more deeply than the day before.” — Rose Kirchgessner

“Every (night) I wondered how tomorrow could possibly be better than the day I just had,” said Rose Kirchgessner, who attended SEEK23 with a small group from the St. John Paul II Newman Center at Illinois State University in Normal. “And every day, God continued to show us His mercy, peace, and joy even more deeply than the day before.”

The annual SEEK conferences are sponsored by the Fellowship of Catholic University Students (FOCUS). This year’s gathering, on the theme “You Are Called,” took place Jan. 2-6 at the America’s Center Convention Complex in St. Louis. It featured several well-known speakers including Jonathan Roumie, the actor who plays Jesus in the hit series “The Chosen,” and Father Mike Schmitz, host of the popular podcasts “The Bible in a Year” and the newly released “The Catechism in a Year.”

The Diocese of Peoria was well represented at the conference. Among the larger groups were 80 pilgrims from St. John’s Catholic Newman Center at the University of Illinois in Champaign, and about 30 students and campus leaders from the St. Joseph Newman Center at Bradley University in Peoria. 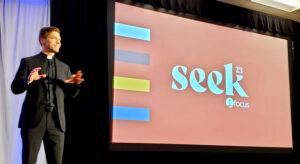 Father Chase Hilgenbrinck, the Diocese of Peoria’s vocations director for recruitment, was among the speakers at SEEK23 in St. Louis. A former professional soccer player, Father Hilgenbrinck spoke on the topic “When the Jersey Comes Off.” (Provided photo)

In addition, nine seminarians of the Diocese of Peoria took part in SEEK23, and Father Chase Hilgenbrinck — vocation director for recruitment — was among the conference speakers. A former professional soccer player, Father Hilgenbrinck spoke on the topic “When the Jersey Comes Off.”

“The jersey is an analogy for anything in our lives that we come to accept as our identity over and above our true identity as baptized sons and daughters of God,” he told The Catholic Post. “This might be music, academics, a particular career, a particular relationship. . . . The reality for all of us is that we were not made to give our lives to these ‘jerseys’ and with or without notice, all of these jerseys will come off at some time. Therefore, the life-saving question is “Who are we when the jersey comes off?”

The conference also included daily Mass, confession, and several tributes to Pope Emeritus Benedict XVI, who died just a few days before the event began. A Wednesday evening “Eucharistic Adoration in the Dome” made a lasting impression on many of the pilgrims from the Diocese of Peoria.

“As the Eucharist passed by, I could feel Him touching my heart, and I could see many people experiencing the same kind of personal encounter.” — Mary Rose Coveyou

“I’ve never been with that many Catholics in one place before,” said Mary Rose Coveyou, a sophomore at Bradley University who is from the Ottawa Catholic Community. She called a eucharistic procession on adoration night especially inspiring.

“As the Eucharist passed by, I could feel Him touching my heart, and I could see many people experiencing the same kind of personal encounter,” said Coveyou. “This was an amazing reminder for me of who God is, and how He knows, loves, and pursues each one of us personally and intimately, and I believe that is something that the world desperately needs to hear.”

Paul Szmanda, a senior at the University of Illinois who was attending his first SEEK conference, admitted he “shed a few tears” as he felt God’s presence during adoration with 17,000 other people.

“There was just a kind of warmth and energy I saw within it,” said Szmanda, a political science major who hopes to go to law school.

“I don’t want to overhype it,” he continued, “as I was already an active Catholic, so it wasn’t as though this converted me, or turned me from a passive Catholic to an active Catholic. Rather, it was one more step in what has already been a consistent progression of my faith, and for that I’m thankful.”

EMPOWERED FOR THE NEW YEAR

Coming at the start of 2023, the SEEK conference will impact the faith life of both university students and the many campus ministry leaders who attended throughout the coming year. 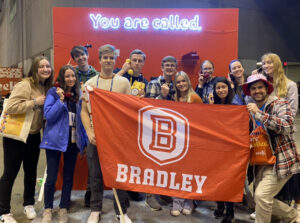 Students from St. Joseph Newman Center at Bradley University in Peoria use telephone props to show they are ready to respond to the SEEK23 conference theme, “You Are Called.” Campus ministries from several colleges in the diocese sent students to the event, including 80 from the University of Illinois in Champaign and 30 from Bradley. (Provided photo)

“I was really encouraged by an underlying theme of the importance of personal growth, healing, and relationship with the Lord,” said Sara Petty, campus minister at St. Joseph’s Catholic Newman Center at Bradley University. She coordinated a group that also included attendees from Monmouth College and Illinois Central College.

“Especially working in ministry, it can be tempting to justify pushing off or shortening personal prayer time because there are students to meet with or events to plan,” continued Petty, one of more than 650 campus ministers and chaplains at SEEK23. This year, she hopes to “prioritize my own faith life and continually recommit to spending time in conversation with Jesus each day.”

Angela Civantos, a freshman at the University of Illinois, called SEEK23 “very informative and eye opening,” adding “I had never experienced anything like it.” She cited Jason Evert’s talk on prayer and said “I will absolutely be trying to pray even more than before and strengthening my prayer life through prayer.”

Also noting Evert’s talk on prayer was Mary Schiltz, a junior journalism major at Illinois State University, who said it “showed me that you can’t give what you don’t have.” Schiltz was grateful the conference introduced her to many Catholic speakers, some of whom she had the opportunity to meet, including Roumie as well as Sister Mary Grace and Sister Bethany Madonna of the Sisters of Life.

“Now I have a list of podcasts to listen to and books to read that will help me along my faith journey,” said Schiltz.

“I think SEEK was a great thrust into the New Year,” said Szmanda. “It set a good tone for these next 12 months.”