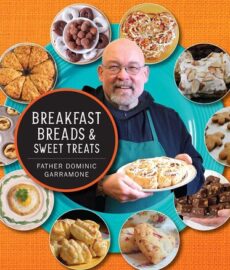 Have you ever wanted to support religious vocations and eat sweets at the same time? If yes, then the latest book by Father Dominic Garramone, OSB — “Breakfast Breads & Sweet Treats” — is the book for you. It’s a total win-win.

I first saw the book briefly highlighted in an edition of The Catholic Post a couple of months ago. It was the perfect timing because I had recently moved into a house of my own, so I now have my very own kitchen to bake and make a mess in. Having that luxury, I was excited to jump into the newest cookbook by Father Dom, a monk of St. Bede Abbey in Peru and head of the religion department at St. Bede Academy.

I had a plan to bake my way through the month of December. So far, I’ve made five recipes.

I started my journey with Fastnachts (traditional German doughnuts). Then I moved on to butterscotch gingerbread cookies, bacon cheddar chive scones, cathead biscuits and sausage gravy. I closed out the month with mint chocolate muffins, which turned out to be the overwhelming favorite! They took me all of 15 minutes to whip up and throw in the oven. While they were baking, I had just enough time to clean the kitchen. And as a reward, I treated myself to a delicious muffin. Another win-win.

Honestly, it only took one recipe for me to want to do another (and another and another). So, I’m going to keep this going through January.

Next up for me: elephant ears and salted butter toffee caramel corn. (My mouth is watering just thinking about it!)

I was most intimidated to attempt the doughnuts after an unfortunate grease fire in college. I’m happy to report no fires occurred this time, thanks to the easy-to-follow, straightforward directions. And even better, the doughnuts were delicious. In his note, Father Dom explained that these doughnuts are a traditional German treat for the day before Ash Wednesday — much like Polish paczki. This was just one of his many notes dispersed throughout the book, ranging from practical tips and shortcuts to backstories and personal anecdotes.

I learned a lot of very interesting tips through this book and the reasons why certain baking best practices are the way they are. I also learned that Father Dominic, who is known as the “Bread Monk,” went to high school with my parents, which made baking these recipes all the more endearing somehow — like I was baking with someone who has likely made appearances in my parents’ reminiscent high school stories.

Hands down, the biggest selling point about this book are the tantalizing, fabulous, full-color, full-page pictures — also done by Father Dom. He’s one talented monk. The pictures prompted me to make the five recipes I chose. They simply looked too good to pass up. I don’t know about you, but I make many of my food decisions based on what looks the best as opposed to what sounds the best, so the pictures were particularly helpful.

Nothing I’ve made has turned out quite as beautiful as Father Dom’s pictures, but they’ve all been delectable!

There’s truly something for everyone in this cookbook — easy recipes and advanced; savory and sweet; chocolate and fruit; snacks and full meals.

I feel like Father Dom is a musician who has been popular for years and I’m only just now discovering his latest hit on the radio. So I feel a little late to the party, but I can’t wait to add to my Father Dominic Garramone cookbook collection. I would officially call myself a breadhead.

KATIE FALEY is a member of St. Mark Parish in Peoria and a writing coordinator for OSF HealthCare. A member of The Catholic Post’s book review team, she has a master’s degree in theology and theological studies from the University of Notre Dame.