Bishop Tylka pays tribute to what late pope did, will continue to do for church 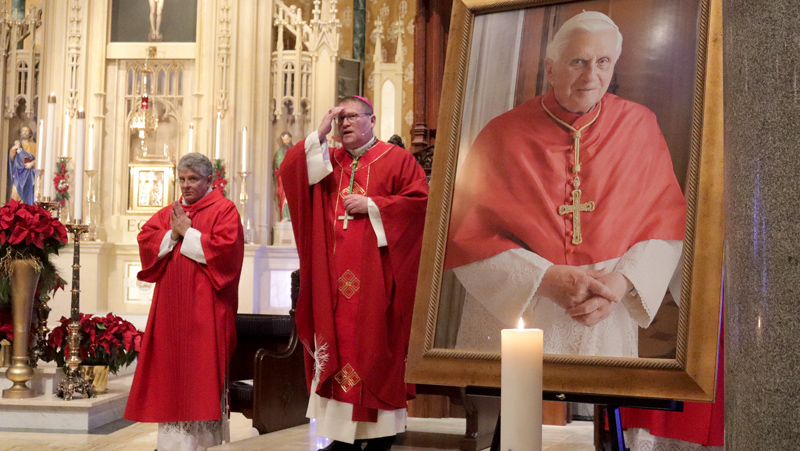 A large portrait of Pope Emeritus Benedict XVI was placed in front of St. Mary's Cathedral in Peoria after the retired pope died Dec. 31. People who attended the Memorial Mass, celebrated by Bishop Louis Tylka on Jan. 5, stopped after Mass to say a prayer and pay their respects. (The Catholic Post/Jennifer Willems)

People around the world continued to storm heaven with prayers for Pope Emeritus Benedict XVI, even after he was laid to rest in the grotto of St. Peter’s Basilica on Jan. 5. Among them were those who gathered at St. Mary’s Cathedral in Peoria with Bishop Louis Tylka for a Memorial Mass that evening.

“Dear brothers and sisters in Christ, today we gather in gratitude. Gratitude for the long life of Pope Emeritus Benedict XVI, and gratitude for the eternal reward that he now enjoys with the Lord,” Bishop Tylka said his homily. “Our faith is in the resurrection of Jesus Christ, and through him our own sharing in eternal glory is the truth that we profess, it is the hope in which we securely live.” 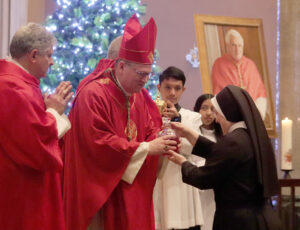 Bishop Louis Tylka receives from Sister Marion Hudackova, FSJB, the wine that will be consecrated at the Memorial Mass for Pope Emeritus Benedict XVI at St. Mary’s Cathedral in Peoria on Jan. 5. (The Catholic Post/Jennifer Willems)

He also offered gratitude for everything the late pope would continue to be for the church.

“For centuries ahead, many will unpack his wisdom and his faith and his teachings as we continue to read his writings and look back into the facets of his life,” Bishop Tylka said. “We give thanks for him and for our faith.”

Priests of the Diocese of Peoria were invited to concelebrate the Mass, which was open to the public. Those who attended found a large portrait of Pope Emeritus Benedict XVI at the front of the cathedral, just a few feet from where Bishop Tylka sat, with a large candle burning in front of it.

The readings for the liturgy were proclaimed in English by Richard LaHood and in Spanish by Jason Nava. After the Prayers of the Faithful, Bishop Tylka invited the assembly to join him in a “Prayer for the Repose of the Soul of Pope Emeritus Benedict XVI.”

Far from being somber, the songs for the Mass were filled with reminders of God’s love and mercy, and emphasized hopefulness in the Lord at all hours of the day and night. Jon Kroepel, diocesan director of sacred music and cathedral organist, accompanied singers from the cathedral’s Spanish choir, Holy Family Parish in Peoria, and Peoria Notre Dame High School.

As is customary at funerals for priests in the Diocese of Peoria, the clergy led the singing of the “Salve Regina” at the end of Mass.

As people left the church, the bells of St. Mary’s Cathedral tolled 95 times — once for each year of the late pope’s life.

LIVED FOR THE LORD

Noting that numerous tributes for Pope Benedict had appeared online, on television and on social media, Bishop Tylka talked about one report that recalled a homily he gave at St. Patrick’s Cathedral in New York during a visit to the United States in 2008. In it, the pope used the imagery of stained glass windows for a reflection on vocations within the mystical body of the church. 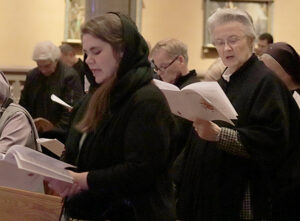 Consecrated Virgin Taryn Watkins of Peoria and Sister Kathleen Ann Mourisse, OSF, president of the Sisters of St. Francis of the Immaculate Conception in West Peoria, join in the “Prayer for the Repose of the Soul of Pope Emeritus Benedict XVI” at a Memorial Mass at St. Mary’s Cathedral on Jan. 5. (The Catholic Post/Jennifer Willems)

Stained glass is a fitting image for his life and ours, Bishop Tylka said.

Ultimately, the hope, prayer, dream and desire is that the window — that our life — “is a reflection of the light that shines through, which of course is the light of the life of Jesus Christ, our Savior,” Bishop Tylka said.

He pointed out the many facets of Pope Benedict’s life, from his childhood in Bavaria, to his studies for the priesthood and eventual ordination, to his service as a scholar and “perhaps one of the best theologians of the 20th century,” to his ministry as a cardinal and successor of St. Peter, and said that to pick one of them is to miss the reality of his life and how he lived it for the Lord.

“It’s been reported that his final words were ‘Lord, I love you.’ Think about that,” Bishop Tylka said. “I think he was very clear in his life and in his teaching that it doesn’t start with us. It starts with God. It starts with the light that shines through the windows of who we are, to create the image, to bring the facets to life.” 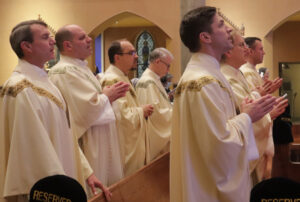 Following the tradition for funerals of pirests in the Diocese of Peoria, the clergy who concelebrated the Memorial Mass for Pope Emeritus Benedict XVI on Jan. 5, led the singing of the “Salve Regina.” (The Catholic Post/Jennifer Willems)

Being at the Memorial Mass was important for Juana and Alfredo Garcia of St. Mary’s Cathedral Parish because it was a way to give something back to Pope Benedict and pray for his soul.

“We say goodbye. It brings us together,” Alfredo said.

Father Chris Gerard Haake, pastor of St. Patrick in Dwight and St. Paul in Odell, said that while he never met the pope, he shed a few tears upon hearing of his death.

“I had a great love for Pope Benedict. I just loved his writings,” said Father Haake, who brought parishioners Samuel Pugh, Pat Thompson and Lou Zabel with him to the Memorial Mass. “He spoke to me.”

“After they finish studying all of his works, his multitudinous works, they’re going to declare him a doctor of the church, I’m sure of it,” said Mary Ann Fahey-Darling, director of liturgical music at St. Anthony in Bartonville. “The man was brilliant, absolutely brilliant.”