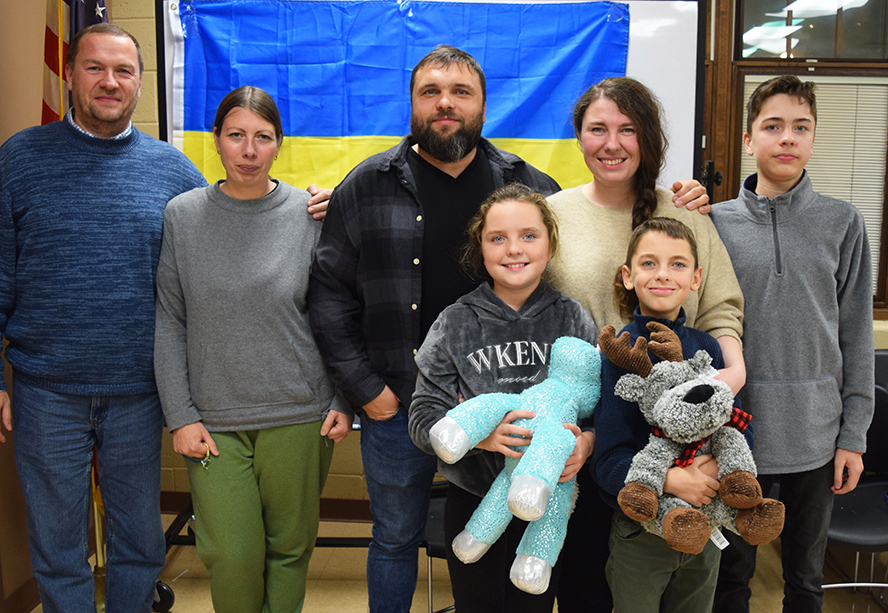 Pictured during a welcome potluck hosted Nov. 29 by Immaculate Conception Parish in Monmouth are recently arrived refugees from Ukraine Stepan Skrypnychenko and Olesia Chychaova (left) and the Bud family, including parents Vitalii and Irene and children Zack (12) and twins Milena and Mark (9), holding gifts to them presented at the dinner. (The Catholic Post/Tom Dermody)

MONMOUTH — Irene and Vitalii Bud held out for eight months before deciding to leave their beloved-but-war-torn homeland of Ukraine with their three children.

However, when Russian bombs reached their city of Rivne and power plants were being targeted as the bitter cold of winter approached, the Bud family fled on a journey that eventually brought them to this Warren County community on Nov. 12.

“Everyone has treated us with a lot of love and support, and showered us with kind words and blessings,” said Irene, who was a freelance translator in Ukraine and speaks English very well. 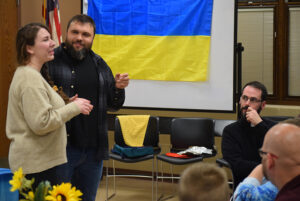 Irena Bud translates a message of gratitude from her husband Vitalii during a potluck welcome dinner hosted for Ukrainian refugees on Nov. 29 by Immaculate Conception Parish in Monmouth. Looking on at right is Father Timothy Hepner, pastor, who called the refugees’ courage and sacrifices “inspiring” and lauded the ecumenical faith-in-action evidenced the by generosity being shown them in the community. (The Catholic Post/Tom Dermody)

That love for the Buds and another recently resettled Ukrainian refugee married couple — Stepan Skrypnychenko and Olesia Chychaova — was tangible at a potluck welcome dinner hosted in Immaculate Conception Parish’s Mary Twomey Hall on Nov. 29. Four members of the parish are on an ecumenical Maple City Sponsor Circle team that has committed to assisting the refugees for up to two years.

“You are a very open-hearted community,” Vitalii told potluck attendees through his wife’s translation. “First, we had thoughts of going to places where there is a big Ukrainian community. But now that we are here, we understand it is the best place for us to be.”

The Buds have taken up residence in a fully furnished, two-bedroom apartment in the vacant parsonage of the First Lutheran Church in Monmouth. Vitalii, who was a worship leader in a church in Rivne, is very musical and has already tended to and tuned a century-old piano in the parsonage.

The parsonage also hosted Stepan and Olesia in the months following their arrival this summer. The couple has since moved to an apartment complex, and Olesia has found employment as a custodian at a local public school. They continue to learn English through a local ESL program.

“We are studying with people from other countries — from Myanmar, Mexico, China,” said Olesia. “It’s very interesting and inspiring.”

Both families agreed to an email interview with The Catholic Post. They shared thoughts about their homeland, adapting to life in the United States, and mostly expressed deep gratitude for the support they have received.

“My husband and I want to say thanks very much to the members of the sponsor circle of Monmouth,” wrote Olesia. “If we wrote it, the size of the words ‘thank you’ would be the size of the universe.”

The presence of the refugees has spurred area churches and the Monmouth community to extraordinary generosity.

“I know people are good, but my heavens, I never knew they were that good,” said Leslie Freeman, a member of Immaculate Conception Parish who serves on the Sponsor Circle team. “If we said we needed something, it was there.” The needs now include reliable cars. (See inset information.)

CAN YOU DONATE A CAR? One of the pressing needs for the Ukrainian refugees in Monmouth as they seek and acquire jobs is transportation. Should you or someone you know wish to donate a reliable car, Stepan and Olesia are hopeful for a very small vehicle, while the Bud family would be grateful for a van or other vehicle that can seat five. For more information on this or other ways to help, or on the Sponsor Circle program, email Tom Sienkewicz at tjsienkewicz@gmail.com.

Father Timothy Hepner, pastor of Immaculate Conception Parish, said it has been inspiring to see faith in action as well as the courage and sacrifice of the refugee families.

“We all can read the newspapers and see the television news and freak out about all the things going on in the world,” Father Hepner said at the potluck. “It’s great when the Lord gives us the opportunity to actually do something about it and to show that — while there is evil in the world — at the end of the day self-sacrificial love wins out.”

He encouraged Catholics and all in the community to be open as well to others who may not have refugee status but have faced traumatic experiences.

“When we have the opportunity, ask people a little bit about themselves and learn where they’re coming from,” said Father Hepner. “It changes our life and way of thinking to hear what people have to go through to come here and experience the blessings most of us were born into.”

“UKRAINIANS MOST OF ALL WANT PEACE”

Asked what Catholic Post readers should know about Ukraine, both Olesia and Irene said their homeland loves and wants peace.

“I want to say that Ukraine tried to become the most peaceful and friendly country ever in the history of human civilization,” said Olesia. She noted that 30 years ago, the Ukrainian government voluntarily gave up its nuclear weapons and ballistic missiles.

“We lived absolutely peacefully and were proud of it,” she continued. “Although the majority of Ukrainians are very poor people, we always knew where we should strive to make our country more free and democratic. And it certainly wasn’t Russia.” 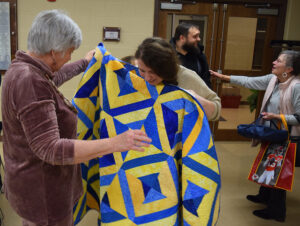 Irene Bud accepts a quilt with the colors of the Ukrainian flag from Pam Van Kirk, a member of the First Lutheran Church in Monmouth and the Maple City Sponsor Circle team. The quilt was made by Martha Smith. (The Catholic Post/Tom Dermody)

Irene said Ukrainians want to “beat their swords into plowshares” again, but they have not forgotten “the awful years” under the Soviet Union, and will not give their country back to the invader.

“People now are united,” she wrote. “People know they will and can endure everything, and even when the whole world closes its eyes on us, we will never surrender.”

Irene also said Ukraine “has the richest soil in the world” and that “almost everyone had their own piece of soil, where they grow everything.”

Many of their friends and relatives remain in Ukraine. Contacting them is difficult. The mobile networks and internet depend on electricity. “These days, at least eight hours a day they are without power,” said Iryna.

Others fled to Europe or the United States. Some have returned to Ukraine “even to live in such circumstances, because it was very difficult for them to adapt to a new country.”

Olesia and Stepan said their arrival in the U.S. on July 13 “was like a new birth.”

“It’s only now that the stress of the war goes away,” Olesia wrote,  adding that “in its place come the good impressions that members of the Sponsor Circle of Monmouth give us.”

Meanwhile, the Buds’ children — Zach, 12, and 9-year-old twins Mark and Milena — have enrolled at Immaculate Conception School where, despite knowing very little English, they have already grown to “love their school, their teachers, and schoolmates,” said Irene.

“Our kids have grown up very fast because of this war,” Irene acknowledged in an interview with The Catholic Post via email. “They sometimes ask questions and see or hear about things that kids should not know. But we’re happy that they have some normalcy of life here.”

At the potluck dinner, Jon Sims, pastor of the First United Methodist Church in Monmouth, said that while not authorized to give the Ukrainian refugees the key to the city, he and members of the community are offering their hearts.

“We can’t even imagine how bad your experience has been in order to come here. None of us have had to undergo that,” he told them. “All we can do is offer you our hearts, offer you our welcome, and hope above all that you will feel a sense of home here whenever and while-ever you are with us.”

Asked what about life in the United States has surprised her family, Irene said “the first thing you notice are the big cars. The cars we consider big in Ukraine are not big here at all.”

But the major surprise? The number of churches in Monmouth, about 24.

“Almost everyone we have met have been Christian people,” she said. “Maybe you get used to this, but we see in this fact your great blessings.” 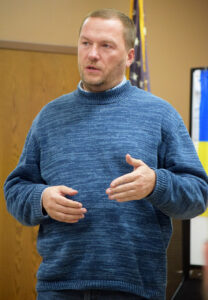 Stepan Skrypnychenko said he and his wife Olesia thought their journey from Ukraine would be like a trip from which they could return. But since that is not possible, they are grateful for the possibility of a new home in the United States. (The Catholic Post/Tom Dermody)

Olesia recalled that on the first day “it was even scary to go outside” of their new home into unfamiliar surroundings.

“The first trip to the grocery store is like an adventure,” she wrote. She noted the taste of food and drinks is also very different.

“But most importantly, there are very friendly, polite, and kind people. We continue to be surprised by everything new.”

Sometimes it seems like they are merely on a trip, said Olesia and Stepan. “But returning to reality, we understand that the traveler can return home, but we don’t. We have no home and it makes us feel a little sad.” But they are grateful for the possibility of a new home here and for the generosity that is making it happen.

“God bless your country and its people,” added Irene.

As Christmas approached, Irene explained some traditions in Ukraine — starting with the fact that in Ukraine it is celebrated on Jan. 7.

“On Christmas Day, all the family gather to have dinner with 12 dishes,” Iryna explained. The main dish of the evening is “kutia,” boiled wheat mixed with poppy seeds and honey, walnuts, and raisins.

Caroling is also popular in Ukraine. The door-to-door caroling starts on Christmas Eve and ends on Jan. 14, and for their songs carolers receive treats, money, or gifts.

EDITOR’S NOTE: Christmas cards or other messages of welcome may be mailed to Olesia Chychaova and Stepan Skrypnychenko and/or the Irene and Vitalii Bud family in care of Immaculate Conception Church, 200 W. Broadway, Monmouth, IL 61462.