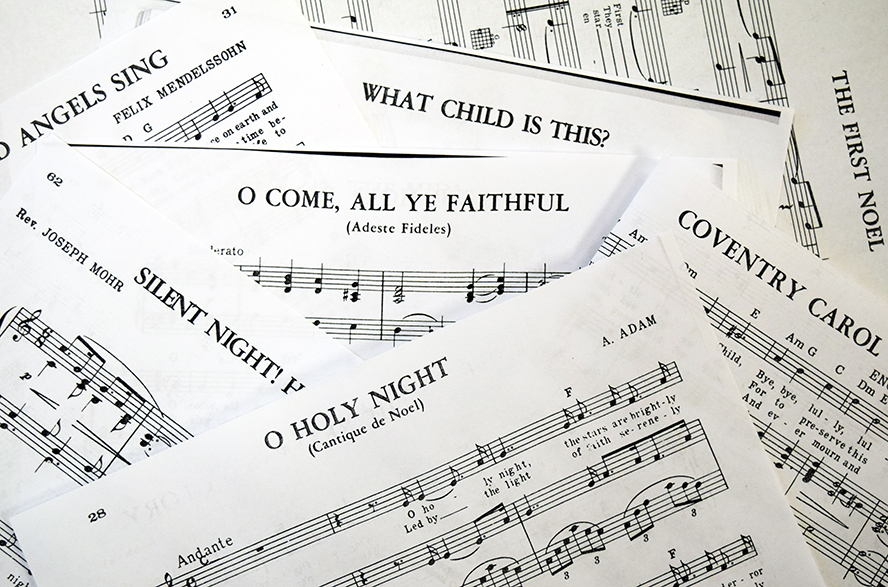 “O Holy Night” edged out “Silent Night” as the favorite Christmas hymn or carol in a Catholic Post survey of parish music directors, choir directors, or organists/accompanists from across the Diocese of Peoria.

“I have heard it sung by so many different singers, and each rendition is beautiful in its own way,” said Mary Edgerley, accompanist at Sacred Heart Parish in Granville, of “O Holy Night.” It was named as favorite by seven of the 40 respondents to the survey conducted via email in early December.

“When I hear ‘Fall on your knees!” or ‘Christ is the Lord! Oh, praise His Name forever!’ my soul can’t help but do just that,” said Edgerley.

In addition to asking their favorite Christmas hymn, the survey also asked the reason behind the musicians’ choice. The responses included beauty of the melody, the impact of the lyrics, family or parish traditions and memories, and more. (For their full responses, as well as YouTube links to some of the more lesser-known hymns, click here.)

Richard Dubois is in his 50th year as organist for the parishes of St. Mary, Metamora, and Immaculate Conception, Lacon. He explained why “Silent Night” — which received five votes — is special to his family.

“We sing it together as a family on Christmas Eve,” said Dubois. “The lyrics and message is what Christmas is all about. This is the first song I played on the piano when I was very young.”

Other hymns or carols receiving multiple votes were:

Eighteen hymns received one vote: “Angels Gloria,” “Birthday of a King,” “Child of the Poor,” “Christmas Lullaby,” “Christ Our Light Has Come,” “Coventry Carol,” “God with Us, Emmanuel,” “Go Tell It on the Mountain,” “Hark! The Herald Angels Sing,” “Lo, How a Rose E’er Blooming,” “In the Bleak Midwinter,” “It Came Upon a Midnight Clear,” “Still, Still, Still,” “The Cherry Tree Carol,” “The First Noel,” “The Snow Lay on the Ground,” “This is the Truth Sent from Above,” and “Tu Scendi Dalle Stelle” (“You Come Down from the Stars”).

Those selecting “Of the Father’s Love Begotten” acknowledged its chant melody.

“It has the most beautiful melody I could ever imagine and fills my soul with the beauty of God whenever I hear or sing it,” said Sister Lori Kirchman, OP, director of music at Holy Family Parish in Lincoln. “The text is equally beautiful.”

Sister Lori said she learned the chant as a novice “and that was a special time in my life, so that’s also probably why it means so much to me.”

“While I love many of the 18th and 19th century Christmas carols, ‘Of the Father’s Love Begotten’ gives congregations a hymn they usually don’t hear on the radio this time of year. Sometimes, I think, that allows the meaning of the text to sink in more deeply.”

The extended “Gloria” in the refrain of “Angels We Have Heard on High” — whether sung by a filled church or by children’s voices — was a reason cited by those selecting that hymn.

“Our children’s choir sings the melody of the ‘Gloria’ refrain with confidence and great joy,” said Joanie Resendiz, music director at St. Columba Parish in Ottawa. “You can’t help but smile at that!”

Mary Kay Benda said “Angels We Have Heard on High” is beautiful in any setting, including children’s choirs, four-part choral harmony, or accompanied by brass or a capella. But the organist and choir director at St. Paul Parish in Macomb heard a new favorite rendition “last year when one of our cantors sent me a video of her 2-year-old daughter (a future cantor, I hope) singing the refrain.” 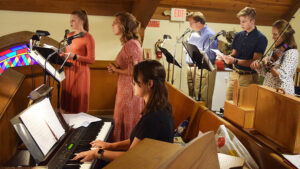 Music ministers from St. Joseph Parish in Brimfield lead the assembly during a Mass in September. Choirs throughout the diocese are busy preparing for Masses at Christmas. (The Catholic Post/Tom Dermody)

The backstory told by Nancy Swanson to explain her choice of “O Come, All Ye Faithful” comes from a moving personal experience.

“Fifty years ago I celebrated midnight Mass in Madrid,” said Swanson, organist at St. Anne Parish in East Moline. “After the Mass, the organ played the hymn, and all present were invited to come adore the infant Jesus. The experience touched my heart and filled me with the love, joy, and peace of the birth of Jesus so long before, and how he became human to save us. May we always remember to adore and thank God for His great gift.”

Abbie Hamilton, organist at Saint John Paul II Parish in Kewanee, hears “What Child is This?” as a lullaby. “It is so soft, yet the words are so powerful,” said Hamilton, whose mother, Susan Welgat, is choir director at the parish.

“She and I get to collaborate on music on a weekly basis,” said Welgat, who bent the rules to list four favorites — “O Holy Night,” “Jesu Bambino,” the Polish lullaby “Lulajze Jezuniu,” and “The Friendly Beasts.”

“’The Friendly Beasts’ reminds me of the many Christmases my six siblings and I sang this, with each of us taking a different verse,” she explained. “Three of those siblings are now gone — spending Christmas with Jesus and the angels in their heavenly choir.”

NOT ALL ARE WELL-KNOWN

Among the selections receiving only one mention were several well-known carols such as “It Came Upon a Midnight Clear,” “The First Noel,” “Go Tell It on the Mountain,” and “Hark! The Herald Angels Sing.”

“Unfortunately, it seems to have slowly become a lesser known carol,” said Trevor Loes of “It Came Upon a Midnight Clear.” The music director of Sacred Heart Parish in Rock Island called that unfortunate because “it has a lot of great textual, harmonic, and melodic drama.”

But the richness and variety of Christmas hymns and carols may be most evidenced by the selections many may not find familiar.

For example, Heath Morber — director of music at St. John’s Catholic Newman Center at the University of Illinois in Champaign — named “In the Bleak Midwinter” by Gustav Holst and Christina Rosetti.

“I am always, always moved by the last stanza,” said Morber, which has the lyric “What can I give him, poor as I am? / If I were a shepherd, I would bring a lamb / If I were a wise man, I would do my part / Yet what I can, I give him: give my heart.”

“My family has sung it for many Christmas Masses,” she told The Catholic Post. “The message leads us to mediate on the angels singing a soft lullaby to Baby Jesus. I’ll always find a way to sing this song on Christmas and think of the wonderful voices around me filling the church with this joy-filled song as we prepare to celebrate the birth of Christ.”

And what would a Christmas hymn survey be without a response from the organist at the Spring Valley parish named The Nativity of Our Lord?

Mary Jane Tonozzi has played the organ in Spring Valley for nearly 50 years. And she brought with her a hymn she learned from her grandmother, a native of Italy — “Tu Scendi Dalle Stelle” (“You Come Down from the Stars”).

“I taught that carol, in Italian, to our choir (in 1974),” she said, “and we have been singing it every Christmas Eve since then. My sons Daniel and Nicholas sing it and accompany our choir on cello. It’s an event happily anticipated for all of us.”