Peoria Notre Dame soccer players and coaches pose with the IHSA Class 2A boys trophy they earned with a 3-1 win over Chatham Glenwood to cap a 23-3-1 season. The title match was played at Hoffman Estates High School on Nov. 5. (Provided photo/Cindy Dermody)

Peoria Notre Dame again proved it has one of the state’s elite high school soccer programs with a 3-1 win over Chatham Glenwood on Nov. 5 to claim the Illinois High School Association boys Class 2A title.

“Winning a state championship is a really, really hard thing to do,” said head coach Mike Bare in addressing cheering fans at a welcome home reception that evening in the Peoria Notre Dame gym. He praised the commitment and mental toughness of this year’s team, calling them “winners” who rebounded from a disappointing loss in the regional semifi­nals a year ago and overcame injuries this year to post a 23-3-1 record.

The boys soccer state title was the school’s first since 2012. The Irish also had championship seasons in 2010, 2008, and 2004. Bare has been the head coach for four of the five titles.

The celebration continued this week as the team rode atop a fire truck to visit six Peoria-area Catho­lic elementary schools before returning to an all-student assembly at the high school. (See additional photos on The Catholic Post’s Facebook page.) 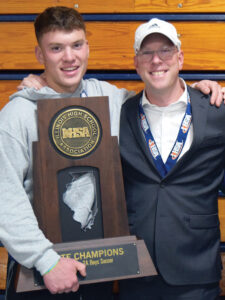 “The amount of time, effort, and hard work that went into the season was all worth it,” said senior co-captain and defender Joel McIntyre. “We outworked other teams and never gave up.”

The state championship had extra meaning for goalkeeper and senior co-captain Dillon Bare, who shared an emo­tional hug with his head coach and father after the final horn.

“To win my dad his fourth state title is a dream,” said Dillon Bare, who allowed only three goals all post-season, sharing that accomplishment with his teammates. “Ever since I saw him win his first state title in 2008 what I was four years old, I have wanted to be one of the players on the field winning it for him.

“I got to call my dad my coach at prac­tice every day and this is a special thing to me,” said Dillon.

“This year Dillon and I really tried to enjoy every moment we were going to have this season,” said Coach Bare. The state championship was “the culmination of everything — all the hard work he’s put in, all the time we’ve spent together.”

Scoring goals in the championship game were sophomores Kayden Hudson and Thatcher Hogan, with senior midfielder Nevan Libert delivering the eventual game-winner at the start of the second half.

“I think the future is really bright for our program,” he said. “The goal next year is to do it again, to repeat. We’ve never done that before.”