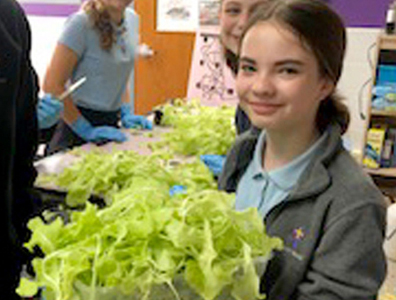 Seventh-grader Lara Rand holds the fruits -- or rather, lettuce -- of their labors in the the aquaponics lab at Holy Cross School in Champaign. The school is the first in the country to have this technology and plans to share what they have learned with others. (Provided photo)

The technology being piloted at the Champaign school uses a water-based, nutrient-rich solution to grow food instead of soil. The lab was dedicated in March and ready for seeds to be planted as classes resumed in August. They started with lettuce and spinach.

The system depends on fish — in this case, tilapia — to provide the natural fertilizer the plants require.

The students harvested their first two batches of lettuce in October.

“It’s starting to take off,” said middle school teacher Judy Crull, who is overseeing the aquaponics lab. “We knew in the beginning there was going to be a lot of trial and error and we had to make some adjustments to the fish tank and the tower itself.”

Since Holy Cross is leading the way for other schools, Crull said they’ve taken seriously the challenge to make it user friendly. “That’s what we’ve been working on.”

She has been running weekly tests for ammonia, nitrate and nitrite and was making plans to turn that over to the students, she told The Catholic Post.

“We wanted to make sure things were done the right way, so we practiced ourselves for a while,” Crull explained. “The students have been the ones planting the seeds.”

A LITTLE WORK GETS BIG RESULTS 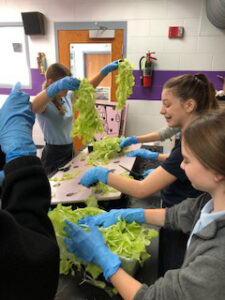 Working to sort and wash the lettuce they harvested from the aquaponics tower at Holy Cross School in Champaign are Lara Rank (foreground) and Alexis Hege. Holding up samples is Zora Unger. (Provided photo)

They started with a lettuce called Spring Mix and have also worked with Butter Crisp lettuce. They did not have luck with the spinach.

“So we’ve been doing some research on why it’s not working,” Crull said. “One of the things we’ve discovered is that it’s a little bit too humid in that lab for spinach.”

When it comes to something like this, however, there is no such thing as failure.

When they do have success, they are planning to share their produce with the school’s lunch program, the St. Vincent de Paul Society, or the Daily Bread Soup Kitchen.

Since no unnatural fertilizer or sprays are being used, the lettuce they harvested just needed to be washed like you would any other kind of lettuce, Crull said.

“They can eat and they can share with those who don’t get fresh fruits and vegetables very often, like St. Vincent de Paul and the food pantry. That part of it is rewarding for them — they see that as a bigger benefit than anything, to be able to help others.” — Judy Crull

“I think what (the students) enjoyed the most is that this is something that’s very doable. You can have fresh vegetables from this that actually taste really good,” she said. “A lot of them are trying things they’ve never tried before. Like we made them try the lettuce without dressing on it.”

In addition to the academics of this, the students are learning that a little bit of work can result in a lot of product, according to Crull.

“They can eat and they can share with those who don’t get fresh fruits and vegetables very often, like St. Vincent de Paul and the food pantry. That part of it is rewarding for them — they see that as a bigger benefit than anything, to be able to help others,” Crull told The Catholic Post.

EVERY STEP A LEARNING PROCESS

The first aquaponics tower was donated by Dick Tryon, CEO of Tryon Technology. Made from PVC piping, it uses LED lights and eight rotating plant trays to grow the food.

A second tower, made possible with a gift from the Eric Meyer family, will be set up a little differently to make the system easier for schools to work with, Crull explained.

In time they will write a curriculum, she said.

“It’s little baby steps for now. We knew it was probably going to take a couple years to get the whole thing figured out,” Crull added.

While it’s just the seventh-graders working in the lab so far, she planned to add other classes gradually.

“It’s really fascinating,” Crull said. “Every step of this is a learning process.”