St. John’s Chapel in Champaign, heart of Newman Center, getting some love 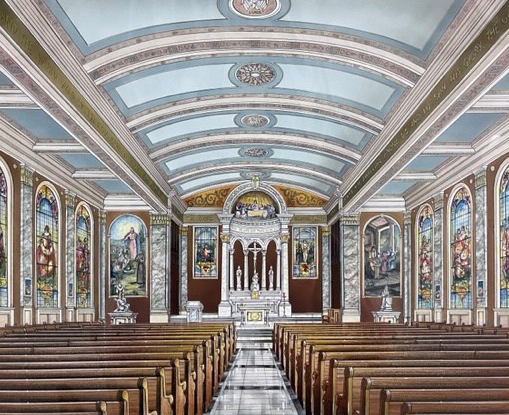 Father Robert Lampitt, head chaplain at St. John's Catholic Newman Center, said this conceptual drawing shows the direction they are going with the renovation of St. John's Chapel at the University of Illinois in Champaign. "The colors might be adjusted a bit," he said. "We're going to get it right." Provided artwork

CHAMPAIGN — For more than 20 years, leaders at St. John’s Catholic Newman Center have dreamed of renovating and restoring St. John’s Chapel. Starting Dec. 19, work will begin to make that dream a reality. 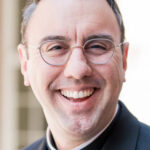 Father Robert Lampitt, head chaplain at St. John’s Catholic Newman Center in Champaign, described St. John’s Chapel as the “heart of our ministry” and said everything they do should flow into and out of the chapel.

“We’ve worked really hard on all of our ministries, our pastoral efforts, to sharpen those and give them greater focus and make it easier for students to engage. Now we want to put that same intentionality into the chapel,” said Father Robert Lampitt, head chaplain.

“We have to take care of the heart of our ministry,” he added. “Everything should flow into the chapel and flow out of that chapel.”

That’s why it needs to sparkle, he told The Catholic Post.

The work is expected to continue through July 2023 and include replacing the temporary altar of repose with a new marble “high altar” beneath the baldachin, and restoring the pews, kneelers and flooring. Plans also call for modernizing the sound and lighting systems, constructing confessionals, enlarging the vestibule area and moving the baptismal font there, and renovating the sacristies.

In addition, the plaster walls will be repaired and painted, along with the ceiling.

Two complementary shrines will be added to the chapel, with the Pieta statue moving from the right side to the left. This is more traditional for Marian statues and imagery, according to Father Lampitt.

The second shrine will have a statue of St. John Henry Newman.

Eventually the pipe organ will be restored and repaired.

Daprato Rigali Studios is the designer and project manager of the $2.5 million project, Father Lampitt said.

BEYOND NUTS AND BOLTS 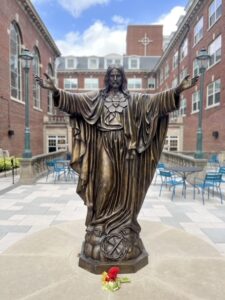 An 80-inch bronze statue of the Sacred Heart of Jesus was added to the courtyard of St. John’s Catholic Newman Center at the University of Illinois to make the entrance more inviting for students and guests. (Provided photo)

“Most people come in for Sunday Mass and they leave. They don’t pay too much attention to the details,” Father Lampitt said. “But when you’re responsible for taking care of it and cleaning it and straightening it and you spend hours in there, you notice all the little details.”

He has had a long history of doing just that. Not only has Father Lampitt been the head chaplain at St. John’s since 2017, but he also was involved in chapel ministries as an undergraduate at the University of Illinois from 1997 to 2002.

“The priests there always talked about it needing to be updated. The plaster was already cracking back then,” he recalled.

In 2008, there were repairs to the heating, ventilation and cooling systems, as well as tuck pointing, roofing and stained glass windows of the building, which has been serving students since 1927.

Father Lampitt said they will still be able to use the chapel for weekend Masses during the renovation and made sure to secure it for Holy Week next April. It’s very likely that weekday liturgies can continue to be celebrated there, too.

That’s what counts, he said.

“It goes beyond the nuts and bolts, paint and the spackle, to the people who sit in those pews,” Father Lampitt told The Catholic Post. “Those are the lives we want to affect.”

The chapel renovation follows a project to update the courtyard outside St. John’s Catholic Newman Center during the last academic year. 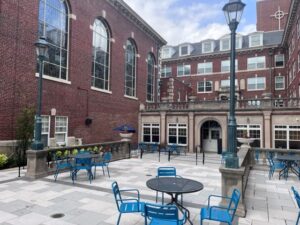 To give students more places to engage with each other, 12 sets of tables and chairs and two picnic tables were added to the courtyard of St. John’s Catholic Newman Center. (Provided photo)

“We wanted to open that space up and make it more inviting,” Father Lampitt said.

Drainage had become an issue, because it’s below grade and had a tendency to flood. The mortared brick surface was replaced and 12 sets of tables and chairs provide places for students to gather.

The chapel steps were redone and an elevator was installed, which runs from the basement to the choir loft in the chapel.

The courtyard also features an 80-inch bronze statue of the Sacred Heart of Jesus, which was dedicated by Bishop Louis Tylka on Oct. 9, the Feast of St. John Henry Newman.

To learn more about the renovation of St. John’s Chapel, visit sjcnc.org or write to info@sjcnc.org.