Teens grateful for diocese’s Abide in Me retreat, chance to get closer to Jesus 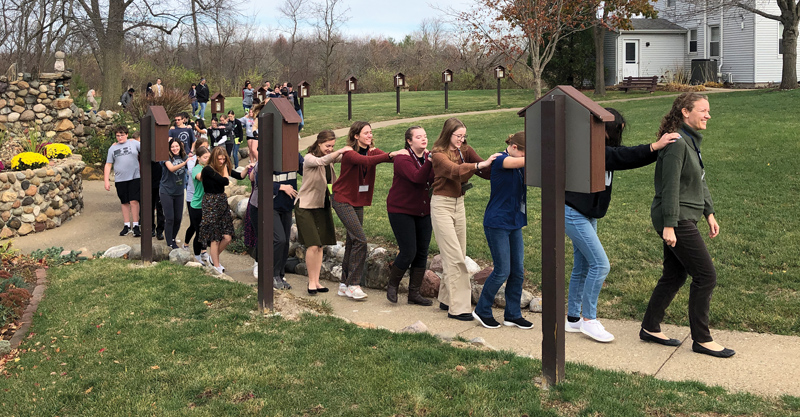 Following a talk, Abide in Me retreatants are led on a "trust walk" around the parish grounds and into St. Mary of Lourdes Church in Germantown Hills by Karen Hertzner, one of the presenters who also served as masters of ceremonies for the weekend. (Provided photo/Katie Bogner)

GERMANTOWN HILLS — Lindsey Britton encountered God’s love in a personal way at the Abide in Me diocese-wide youth retreat Nov. 5-6 hosted by St. Mary of Lourdes Parish here. But the freshman at Alleman High School in Rock Island got an unexpected bonus.

“I met God, but also met myself and who God wants me to be,” said Britton, one of 45 retreatants from across the diocese whose weekend included listening to a series of talks, enjoying social time, celebrating Mass, and especially spending time in the presence of Jesus in the Blessed Sacrament.

“The Abide in Me retreat deepened my faith and helped me get a closer connection with Jesus,” said Lydia Engstrom, a member of St. Patrick Parish in Washington and a student at Washington High School. “It was nice to be surrounded by others my age, too, which was like a type of encouragement that I wasn’t alone.” 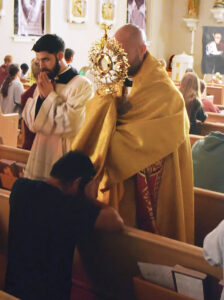 An Abide in Me retreatant bows in prayer and — in imitation of the woman in the Gospel who was healed by touching Jesus’ garment — touches the vestment of Father Eric Bolek extending from the monstrance containing Jesus in the Blessed Sacrament. (The Catholic Post/Tom Dermody)

Among the retreat coordinators were Katie Bogner, junior high faith formation teacher at St. Philomena School in Peoria and director of religious education at Immaculate Conception Parish in Lacon, and Karley Bates of St. Jude Parish in Peoria.

“The graces of the weekend are rich and beautiful,” said Bogner, “and we hope (the teens) carry their experience with them as they return to their homes and schools.”

A similar challenge was shared by Father Eric Bolek, administrator of St. Mary of Lourdes Parish, at the retreat’s final Mass.

“Our churches are emptying out right now in the United States,” Father Bolek acknowledged in his homily. “As this retreat ends and we go back to our parishes, we have to ask ‘What am I doing that’s going to bear fruit? What type of faith am I going to instill in my life and family and those around me that will bear fruit?’”

Father Bolek asked the youth to make a commitment “to go out and proclaim the Good News” and to “choose real love” over what he called “imitation love.”

“Choose real love, and it will light a fire,” said Father Bolek. “People will want to be a part of what you’re are a part of. It will change the world.”

Father Bolek gave one of the retreat talks on the topic of “The Healing Power of the Eucharist.” He also led the youth through what many considered the retreat’s highlight — a moment of personal prayer on Saturday evening as he carried the eucharistic Jesus in a monstrance to each retreatant in a darkened church.

“Being so close to Christ in the Blessed Sacrament showed me how much he wanted an intimate relationship with me, and how much consolation I could find in him.” — Bernadette Mattern

Sharing the story of the woman who was healed when she touched Jesus’ garment, Father Bolek invited the retreatants to acknowledge their own “wounds, weaknesses, and brokenness” and pray for healing as he held Jesus before them.

“This closeness is a powerful experience for many of the teens,” said Bogner. Retreatant Bernadette Mattern agreed.

“Being so close to Christ in the Blessed Sacrament showed me how much he wanted an intimate relationship with me, and how much consolation I could find in him,” said Mattern, a member of St. Joseph Parish in Brimfield whose older sister, Catherine, was among the presenters at the retreat. 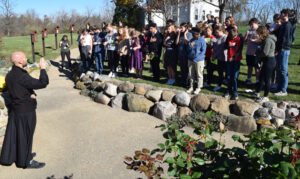 Father Eric Bolek blesses those who participated in the Abide in Me diocesan-wide youth retreat Nov. 5-6 at St. Mary of Lourdes in Germantown Hills, where he is the administrator. During his homily at Mass, he asked the youth to make a commitment “to go out and proclaim the Good News.” (Provided photo)

Karen Hertzner of Bloomington served as master of ceremonies and gave a talk on one of the retreat’s patrons, St. Jose Sanchez del Rio. Other talks were given by Father Michael Pica, Sister M. Mercedes Diaz, FSGM, Sam and Leah Mangieri, Lori Wilson, Maddi Mangieri, and Taryn Waktins, whose painting of St. Tarcisius, the retreat’s other patron, was placed prominently in the church for the weekend.

The retreat also featured recitation of the rosary and opportunities for the sacrament of reconciliation, which Bogner said most retreatants took advantage of. Praise music was led by Mat and Trish Koszarek, members of Sacred Heart Parish in Peoria, as well as Szymon and Gabby Koszarek.

Bogner also expressed gratitude for the hospitality, assistance, and warm welcome shown by members of St. Mary of Lourdes Parish.

“When I told my family and friends about my experience,” said Lydia Engstrom, “I mentioned a lot of the stuff we did, but especially how there was a good mix of fun and seriousness. There were great people and I had a lot of fun.”

The retreat is “a great way to meet and be around other eager Catholic youth,” added Bernadette Mattern.