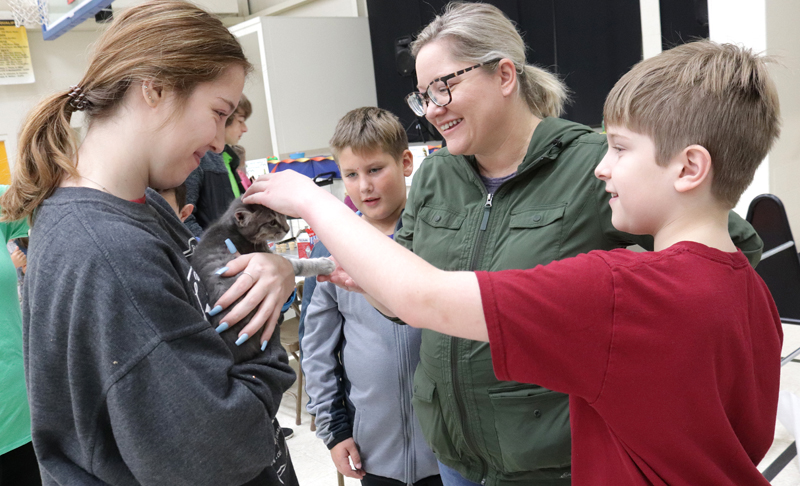 Ben Heinz makes friends with a kitten held by Anya Long of SAMS (Stray Animals Midway Shelter) in Hanna City as part of the Saints Carnival at St. Mary in Kickapoo on Oct. 30. Looking on Kerry Heinz, his mother, and Sam Hershman, who were also visiting a booth devoted to St. Francis of Assisi. (The Catholic Post/Jennifer Wiillems)

KICKAPOO — Saints came calling on the religious education students from St. Mary Church in Kickapoo last Sunday, but they did it in a different way this year. Instead of the children dressing up as saints, they learned about these holy men and women at a carnival that focused on what each was known for. 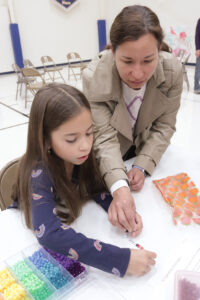 Mariana Nino gets help from her mother, Solimar Reyes, to finish a bracelet at a booth devoted to St. Catherine of Bologna, patron of the arts, at the Saints Carnival at St. Mary in Kickapoo.

Booths had students fishing with St. Peter, playing musical chairs with St. Cecilia, tossing roses into the tilma of St. Juan Diego, playing Saints Bingo, and creating bracelets and coloring with St. Catherine of Bologna. A popular booth was devoted to St. Francis of Assisi — known for his love of animals and creation — that featured six kittens brought by SAMS (Stray Animal Midway Shelter) in Hanna City.

Therese Mueller, director of religious education at the Kickapoo parish, said parents don’t always have time to make costumes. And some children learn differently, she explained.

“So we wanted something more interactive for the kids — hands on, learn something, make it fun, make it engaging,” she told The Catholic Post. “That’s why we thought a carnival.”

Seventh- and eighth-graders were asked to take the lead as part of their preparation for confirmation, according to catechist Janet Doubet.

While it was fun for everyone, the carnival was about the older students passing on their faith to their younger siblings and friends, she said.

One of those students was eighth-grader Grant Bizosky, who volunteered for the St. Juan Diego Rose Toss.

“I didn’t know much about St. Juan Diego, so I thought it would be fun to learn about him and get to know him a little bit,” Bizosky told The Catholic Post. “I learned that his robes are still preserved from 1531, which I thought was interesting.” 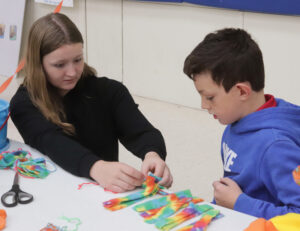 Rosalie Higgs teaches Antonio Einsenbarth how to make a cat toy as part of the booth devoted to St. Francis of Assisi at the Saints Carnival at St. Mary in Kickapoo on Oct. 30. (The Catholic Post/Jennifer Willems)

The Blessed Mother appeared to St. Juan Diego at Tepeyac hill in Mexico in December 1531, sending him as a messenger to the local bishop with the request that a shrine be built in her honor. When the bishop hesitated, she filled Juan Diego’s cloak with roses and sent him back. In the presence of the bishop, he opened his cloak to reveal an image of Mary, who came to be known as Our Lady of Guadalupe.

“I think it does add to their experience and hopefully their recollection,” Doubet said of the exchange between the older and younger students. “Hopefully something goes with them when they walk out of here.”

“I think it’s fantastic to bring saints to life through activities and having kids enjoy the day,” said kindergarten teacher and first grade catechist Brett Hayden.

“I’m an educator, so I think anytime you can take a concept that could be pretty dry or hard to wrap your head around, it’s always great to have a hands-on activity so that they can explore it in a different way,” she said. “I always think something like this is great.”