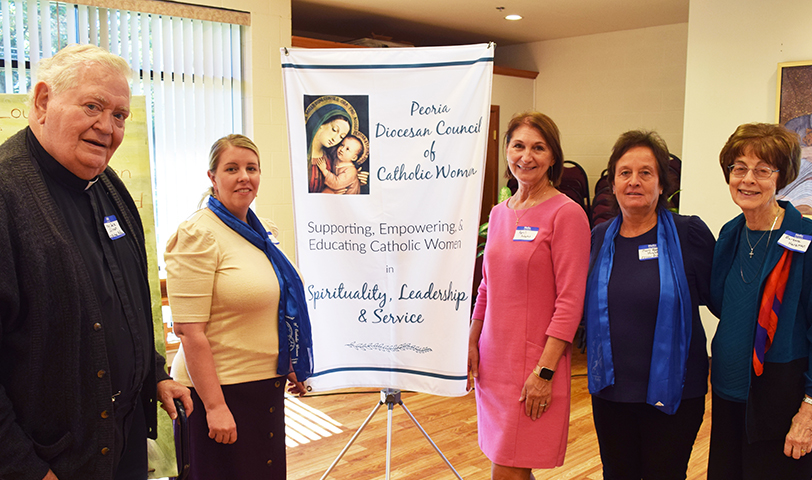 PRINCETON — The National Eucharistic Revival is challenging Catholics first to deepen their own relationship with and reverence for Jesus in the Blessed Sacrament, and then model and share that core belief of our faith with others.

That was among the messages heard by members of the Peoria Diocesan Council of Catholic Women as they gathered for their biennial convention on Oct. 8 at St. Louis Parish in Princeton. 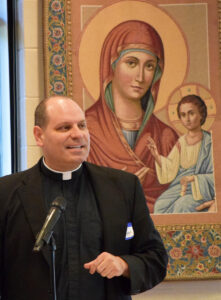 The three-year revival — leading to a National Eucharistic Congress in Indianapolis during the summer of 2024 — is “an opportunity to remind ourselves of the great gift we have” in Jesus’ Real Presence in the Eucharist, said Father Luke Spannagel, the convention’s featured speaker.

Father Spannagel, a priest of the Diocese of Peoria, is one of 58 National Eucharistic Preachers who have been commissioned “to enkindle the flame of eucharistic faith and devotion in the United States” during the revival. In addition to being the featured speaker, Father Spannagel was homilist at the convention Mass.

The convention also featured the election and installation of officers; reports from various commissions on topics such as evangelization, pro-life, immigration, spirituality, prison ministry, legislative action, and international concerns; and future plans. The theme of the gathering was “Receive and Be Filled with Joy.” About 50 women from parishes across the diocese attended.

“We have a lot to offer to help grow your parishes’ women’s organizations,” said Mary Ann Hughes, who was appointed by Bishop Louis Tylka to a second two-year term as president of the PDCCW. A member of St. Mary Parish in Westville, Hughes has traveled extensively during her first term visiting parishes and taking part in women’s meetings.

The remaining officers were elected at the convention. They include:

All four officers were installed by Msgr. Dale Wellman, a senior priest of the diocese who is in his 48th year serving as PDCCW spiritual adviser.

In her talk, Hughes listed three areas for which the organization is seeking women for leadership roles: care of creation, education, and marriage and family. 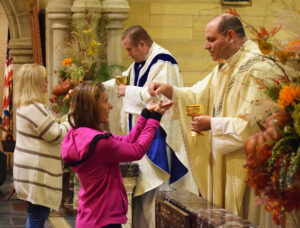 Convention attendees were welcomed by Msgr. James Kruse, pastor of St. Louis Parish, who was principal celebrant of the Mass, and by Madeline Robinson, who heads the St. Louis Parish Council of Catholic Women and thanked the many volunteers who had roles in hosting the women.

Father Spannagel’s keynote presentation focused on eucharistic miracles through the centuries that can “bolster our faith” and show us “what our senses can’t see, but what our faith tells us is always true” — that ordinary bread and wine is changed into Jesus’ body, blood, soul and divinity at each Mass.

Studies showing only about 30 percent of Catholics know and believe that core teaching was the impetus for the U.S. bishops to launch the National Eucharistic Revival.

The eucharistic miracles described by Father Spannagel included several examples of consecrated hosts turning into human flesh and blood, such as occurred as early as the 8th century in Lanciano, Italy, or as recently as 2006 and 2013 in Mexico and Poland.

“These miracles are consistently standing up to medical evaluations,” said Father Spannagel, who is presently parochial vicar at St. Mary’s Cathedral, Sacred Heart, and St. Bernard parishes in Peoria, with residence at St. Philomena Parish. He also said there are consistencies from miracle to miracle such as blood type (A-B, the rarest), and that the flesh appears to be from heart muscle.

“If it’s helpful to our faith, those stories are there,” said Father Spannagel. “They are outside of what’s required for our faith. They’re a bonus.” 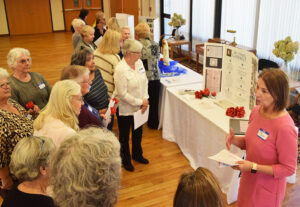 Those attending the Peoria Diocesan Council of Catholic Women convention hosted by St. Louis Parish in Princeton on Oct. 8 had the opportunity to learn of the work of the organization’s various commissions. Here April Adams of St. Mary Parish in Metamora explains Women Connect, a fresh approach to parish women’s organizations. (The Catholic Post/Tom Dermody)

Questions posed by the women following the presentation focused on why reverence for the Eucharist has diminished. Communion in the hand, the loss of the Communion rail in churches, and faulty catechesis were among topics that surfaced.

While Father Spannagel said not to expect the church to make pronouncements requiring all Catholics to receive Communion the same way, he said “these are the right questions for the revival.”

He encouraged the women to “think about not only our own reverence, but how we’re modeling that reverence” to others. He suggested remembering to genuflect when entering church, staying for thanksgiving prayers after Mass, and making Sunday Mass a priority in family life.

EDITOR’S NOTE: More photos from the PDCCW convention have been posted to The Catholic Post’s site on Facebook.