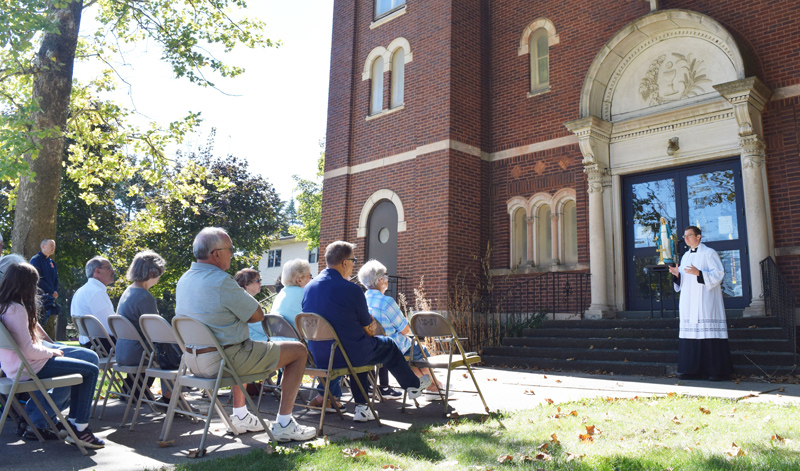 SPRING VALLEY — Beneath mature sycamore trees near the church entrance, about 20 Catholics with their own deep roots at Immaculate Conception Church gathered to pray a farewell to the edifice that has been a symbol of faith in downtown Spring Valley for more than a century.

“We give gratitude for the many blessings God has given in the walls of this church that we say goodbye to today,” said Father Scott Potthoff, pastor of The Nativity of Our Lord Parish, as the outdoor prayer service began on Oct. 1.

The parish of Immaculate Conception, founded in 1884, was merged — along with the former St. Anthony and Sts. Peter and Paul parishes — into a new The Nativity of Our Lord Parish in 2013. St. Anthony Church, located at 510 Richard A. Mautino Drive, became the primary worship site. Immaculate Conception Church, 202 N. Greenwood St. across from city hall, became a secondary worship site and was eventually closed.

In late 2019, the church was relegated to profane use, meaning it would no longer be used for liturgical worship. The years of pandemic delayed the farewell ceremony until the recent sunny autumn day.

“We had the ceremony today because it’s the month of the rosary, the church is dedicated to the Blessed Virgin Mary, and it’s the first Saturday of the month,” said Father Potthoff.

The longtime parishioners were grateful for the opportunity to say goodbye to the church and share memories afterward in the former school, where historic memorabilia was on display courtesy parishioner Jane Kunkel. 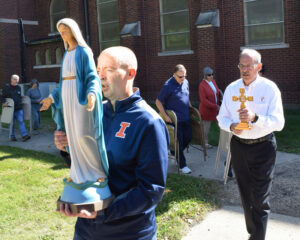 Dan Draper carries a statue of Mary and Deacon Jack Kusek holds a reliquary containing a bone fragment of St. Maria Goretti that had been in the church altar during a procession at the close of a farewell prayer service on Oct. 1 for the former Immaculate Conception Church in Spring Valley. (The Catholic Post/Tom Dermody)

“This is my church,” said Linda Mercier, who had her First Communion, wedding, and three children baptized within its walls. “But life goes on. The church is the people.”

Deacon Jack Kusek, who led a rosary as part of the prayer service, was a frequent altar server at Immaculate Conception Church as he attended the parish school in the 1960s. “There are a lot of good memories back there,” he told The Catholic Post.

As the attendees settled in on folding chairs on the church sidewalk, the church bell tolled — but not for the final time.

“We’re going to remove the bell and bring it to our (present) church,” said Father Potthoff. Likewise, several stained glass windows — including a large image of the Immaculate Conception above the sanctuary — will find new homes, as will the Wicks pipe organ.

Father Potthoff said the Immaculate Conception complex, which includes a school and rectory, both in good condition, will be offered for sale. Whether the church — which would need considerable work — is part of that sale or razed has yet to be determined.

Placed on the church steps for the prayer service were a statue of Mary and a reliquary bearing a bone fragment from St. Maria Goretti that had been in the church altar. The statue and relic were carried in procession to the school at the close of the service.

The brick, Romanesque church is the second to serve the former parish. The original church was destroyed by fire in the spring of 1917 after being struck by lightning. The present church was dedicated by Bishop John Dunne in November of that year.

Father Potthoff prayed that God would continue “to bless your people, and make us into living stones in your one church.”