Battle may be fierce, but God’s truth is stronger, respect life coordinators hear 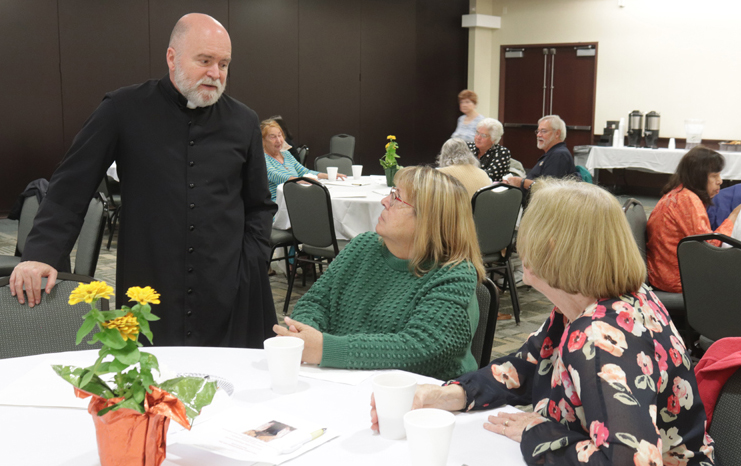 Father William Miller, episcopal vicar for respect life for the Diocese of Peoria, talks with Jeanne Zhorne of Corpus Christi Church, and Lisa Lindstrom of Immaculate Heart of Mary Church, both in Galesburg, at a gathering of parish respect life coordinators on Sept. 24. (The Catholic Post/Jennifer Willems)

It was St. John Paul II who advised people not to focus on falsehoods, but the truth and that’s good advice for those who seek to defend life from conception until natural death, said Father William Miller, episcopal vicar for respect life for the Diocese of Peoria.

“We need to study the real thing over and over and over again,” he told parish respect life representatives who gathered at the Spalding Pastoral Center in Peoria on Sept. 24. It was the first time they had been able to meet since before the pandemic started.

“This is so far gone that God has to intervene. But it doesn’t mean that we get to sit home and wait until he does something. He does it through each of us.” — Father Miller

“Now with Roe vs Wade being overturned, we see that the battle for rescuing the unborn from abortion has moved from a national to a state level,” Father Miller said. “And it is a fierce fight that has only gotten fiercer, dirtier, uglier, meaner, nastier and violent even.”

The abortion industry has thrown so much money and false propaganda at the issue in an attempt to sway public opinion and voters, he said. In the meantime, Satan, the father of lies, is promoting murder and then lying to justify it.

Society has grown comfortable with choice being the idol, but it’s blind choice with people demanding to choose whatever they want regardless of the consequences, according to Father Miller.

Ultimately this is a spiritual battle, he said, so pro-life advocates have to be equipped spiritually. 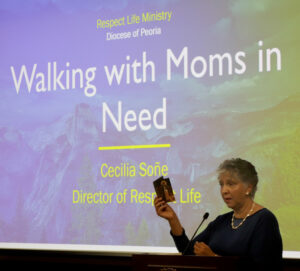 Cecilia Soñé, director of Respect Life Ministry for the Diocese of Peoria, holds up prayer cards that were included in the Respect Life Month materials provided by the U.S. Conference of Catholic Bishops this year. She also talked about a USCCB initiative called “Walking with Moms in Need” with the parish respect life representatives. (The Catholic Post/Jennifer Willems)

“Our ultimate confidence and hope that we’re going to outspend them and we’re going to outdo them on the media — this is so far gone that God has to intervene. But it doesn’t mean that we get to sit home and wait until he does something. He does it through each of us,” Father Miller said. “God uses us and little things, if we do them with fidelity.”

He reassured the respect life representatives that we are in the Lord’s hands and his kingdom is going to come.

“If we are faithful to him, then we have a role in the accomplishment of his kingdom, the overcoming of evil and darkness, and we truly need not be afraid,” Father Miller said. “For such a time as this we have been placed upon this earth.”

“He wants everyone to come to know the truth and to be saved,” Father Miller said. “So that is our impetus. This is, as it were, the big picture.”

One of the ways the U.S. Conference of Catholic Bishops is caring for women is an initiative called “Walking with Moms in Need.” Cecilia Soñé, director of Respect Life Ministry for the Diocese of Peoria, presented packets to the parish representatives that included information about the yearlong program and walked through each of the five phases with them.

They also received directions to download an action guide.

In addition, the parish representatives heard about 40 Days for Life from Anthony Berlinger, the new campaign director in Peoria, as well as other Respect Life Month resources.