Funeral Mass to be offered in Streator Friday for Fr. Jerome Feeley Smith, 63 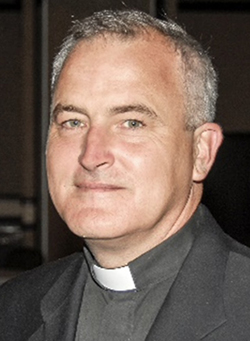 STREATOR — A Mass of Christian Burial will be celebrated at St. Michael the Archangel Church here at 11 a.m. on Friday, Sept. 30, for Father Jerome Feeley Smith, who was ordained a priest of the Diocese of Peoria and later became a commissioned officer in the Chaplain Corps of the U.S. Navy.

Msgr. Philip Halfacre, vicar general of the Diocese of Peoria and pastor of St. Michael the Archangel Parish, will be principal celebrant of the funeral Mass. Visitation is scheduled for an hour at the church prior to the Mass on Friday.

Burial will be in St. Stephen’s Cemetery, Streator. Cremation rites have been accorded.

He earned a bachelor’s degree in philosophy from Holy Apostles College in Cromwell, Connecticut, in 1992 and completed studies for the priesthood at Mount St. Mary’s Seminary in Emmitsburg, Maryland, receiving a master of divinity degree. As a transitional deacon, he served St. Columba Parish in Ottawa and taught at Marquette High School.

Father Smith was ordained to the priesthood by Bishop John J. Myers on Dec. 15, 1996.

In 1999, he was named pastor of Sacred Heart Parish in Farmer City and St. John, Bellflower.

Following a leave of absence, Father Smith joined the U.S. Navy in 2002 as a commissioned officer in the Chaplain Corps, serving on sea duty in the Far East.

He was known for a deep love for the Blessed Mother and the rosary.

He was preceded in death by his parents and an infant brother.

Memorials may be made to St. Michael the Archangel Parish in Streator.