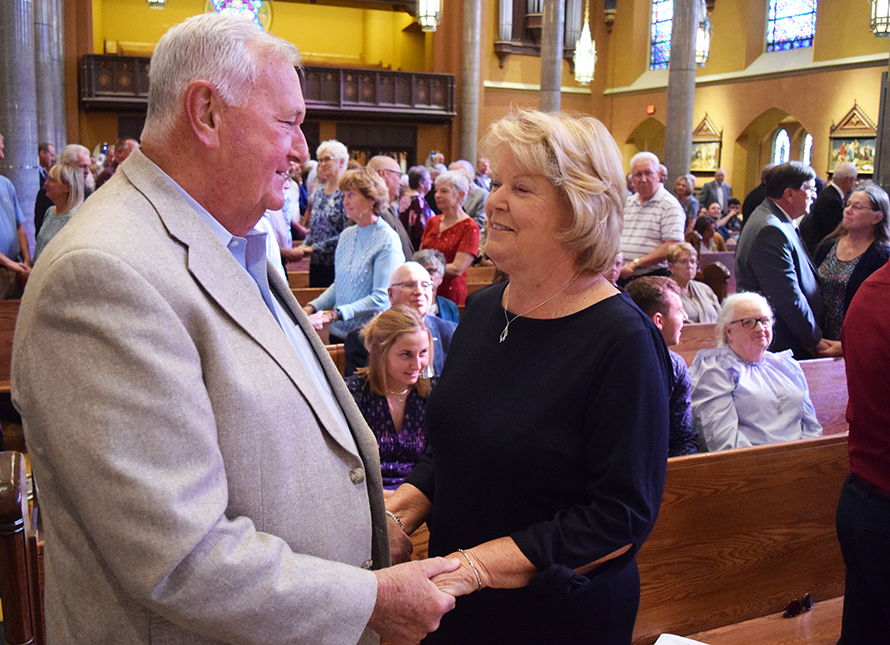 Roger and Kathie Herman of Holy Trinity Parish in Bloomington, observing their 50th wedding anniversary in 2022, renew their marriage vows at the Diocese of Peoria's 25th and 50th Anniversary Mass at St. Mary's Cathedral in Peoria on Sept. 25. Nearly 100 anniversary couples from across the diocese, as well as their families and friends, attended. (The Catholic Post/Tom Dermody)

“Marriage is not a 100-yard dash, it’s a marathon,” Bishop Louis Tylka told nearly 100 couples from around the diocese who are already well into the “race,” having observed — or about to observe — their 50th or 25th wedding anniversaries in 2022. 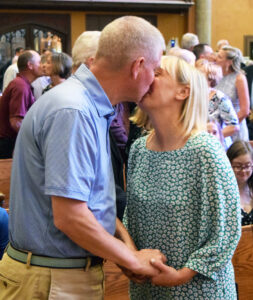 Silver anniversary couple Jason and Jenny Eyman of St. Matthew Parish in Champaign kiss after renewing their marriage vows at the 25th and 50th Anniversary Mass at St. Mary’s Cathedral on Sept. 25. (The Catholic Post/Tom Dermody)

“Today we celebrate all the couples who are here, who have had the determination and dedication, the willingness, the generosity, to love each husband and wife in the sacrament of marriage,” said Bishop Tylka, celebrant of the Anniversary Mass on Sept. 25 at St. Mary’s Cathedral in Peoria. He reminded the couples that their union is “an image of the unity of Christ with the church.”

Prior to leading the couples in a renewal of their marriage vows, Bishop Tylka recalled a theme of St. Paul’s letters to the early church — the image of running a race for Christ.

Husbands and wives who commit themselves in the sacrament of marriage run “a particular race” as they go through their lives together and perhaps raise a family, said Bishop Tylka.

They do not run the race alone.

“The gift of having a spouse is to have that helper who complements us, our own gifts and our own talents, mirrored and matched with theirs, that draws the best out of ourselves and calls the best out of them,” said Bishop Tylka. Further, he reminded the couples, “know that as you run the race, the Lord is always with you.”

AN EXAMPLE OF CHRIST’S LOVE

The annual Mass is sponsored by the Office of Evangelization and Faith Formation. The couples present — 66 celebrating their 50th wedding anniversary and 31 marking 25 years of married life — represented about 400 such milestone anniversary couples across the diocese.

Among them were two couples from the same family. David and Nancy Burge of St. Matthew Parish in Champaign celebrated their golden anniversary on Sept. 9. Joining them at the Mass were their son and daughter-in-law, Michael and Marie Burge, members of Our Lady of the Lake Parish in Mahomet, whose silver anniversary was Aug. 2.

“Two hours after we met . . . I turned to my buddy and said ‘I’m going to marry that girl,’” said David of the night he met Nancy, then a senior in high school, at a Steak and Shake restaurant through a mutual friend. “I just knew.” 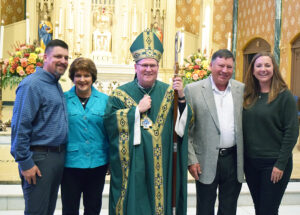 Among the nearly 100 anniversary couples at the Mass Sept. 25 were two from the same family. Bishop Tylka is pictured with golden anniversary couple (to his immediate right and left) Nancy and David Burge of St. Matthew, Champaign, and their son and daughter-in-law (on far left and right) Michael and Marie Burge of Our Lady of the Lake, Mahomet, who recently observed their silver anniversary. (The Catholic Post/Tom Dermody)

The Burges agreed with Bishop Tylka, who said “the way in which married couples love one another gives an example for all of us to witness and to see, as in a mirror, how Christ loves us all.
“Their example of staying married helped us kids to know that’s the normal thing,” said Michael Burge of his parents, who raised four children and have nine grandchildren. “My parents and Marie’s parents (who will mark 58 years of marriage in October), being strong in their faith and staying married, helped us.”

Michael and Marie Burge have five children, and for the past five years the couple has been going through formation in the diocese’s permanent diaconate program. Michael is scheduled to be ordained in December.

Asked the influence of faith in their marriages, Michael said “it’s been a huge part of ours.” Their son, Evan, is a campus missionary with the Fellowship of Catholic University students.

His mother had a lighter answer. “We prayed every day we’d get them all raised and out of the house,” she said of their children, all four of whom are now married.

“WHAT UNITES US ALL IS THE LORD”

As the couples entered the cathedral, they were presented with signed certificates from Bishop Tylka acknowledging their anniversaries, bestowing his blessing, and extending his “heartfelt congratulations.”

The Mass was preceded by a half-hour of music featuring Jon Kroepel, diocesan director of Sacred Music, on the organ accompanied by Molly Wilson-Nogaj on violin. Providing a fitting Communion meditation, “Hymn of Devotion” by Mary McDonald, was the choir from Holy Family Parish in Peoria, directed by Marty Frederickson.

After Mass, Bishop Tylka returned to the sanctuary to pose for photos with the anniversary couples and their families. 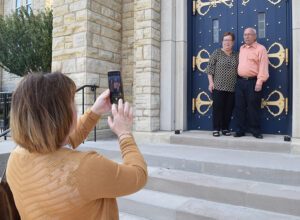 Following the Mass, Jen McGowan took a photo of her parents — Paul and Lynne Kendall, members of Christ the King Parish in Moline who celebrated their 50th wedding anniversary on Aug. 26 — outside the cathedral. (The Catholic Post/Tom Dermody)

In his homily, Bishop Tylka recalled an evening walk through St. Peter’s Square during his visit to Rome in early September. As he entered the square, he saw a newly married couple accompanied by family, friends, and a photographer. “They were beginning the race,” he told the anniversary couples.

Continuing his walk, on the other side of the square, he saw an elderly couple, smiling and arm-in-arm as they exited the basilica.

“I was thinking about what unites them both,” said Bishop Tylka of the young and the older couples. “Of course, it’s the Lord, with St. Peter’s being the symbol of the church. And of course the church is the bride of Christ.”

Similarly, “what unites all of us here is the Lord,” said the bishop, encouraging married couples to “keep your eyes fixed on him.”

EDITOR’S NOTE: More photos from the Anniversary Mass have been posted to an album on The Catholic Post’s Facebook page.