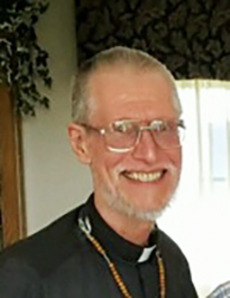 MENDOTA – A Mass of Christian Burial will be celebrated at 10:30 a.m. on Thursday, Sept. 29, at Holy Cross Church here for Father Theodore (Ted) Hochstatter, 73, who was ordained a priest of the Diocese of Peoria and since 1993 served the poor with the Missionaries of Charity, mostly in Africa.

Bishop Louis Tylka will be the principal celebrant of the funeral Mass. Burial will follow in Sts. Peter and Paul Cemetery in Peterstown.

Visitation is scheduled from 2 p.m. to 5 p.m. on Wednesday, Sept. 28, at Holy Cross Church. An additional hour of visitation will precede the funeral Mass.

ORDAINED FOR DIOCESE OF PEORIA

Born Aug. 7, 1949, in Mendota to Richard and Dorothy (Henkel) Hochstatter, he was raised as a member of Sts. Peter and Paul Parish in Peterstown. He attended and was graduated from St. Joseph Seminary High School in Oak Brook and received an undergraduate degree in psychology from Quincy College.

Following a year of study at Catholic Theological Union in Chicago, he worked in child care in Parma, Ohio, continuing his preparation for the priesthood at St. Meinrad Seminary in Indiana, from which he received a masters of divinity degree.

Father Hochstatter was ordained a priest of the Diocese of Peoria by Bishop Edward W. O’Rourke at St. Mary’s Cathedral on May 24, 1980.

BEGINS SERVICE WITH MISSIONARIES OF CHARITY

In September of 1990, Father Hochstatter met Mother Teresa and, in 1993, was released for service with the Missionaries of Charity, beginning at a post in Albania. He concelebrated a Mass with Pope John Paul II in his private chapel in November of 1995, and then days later knelt before Mother Teresa and took his fourth vow of lifelong service to the poor.

In 2001, Father Hochstatter arrived in Africa and it would be his home for the remainder of his ministry.

He was preceded in death by his parents.

Memorials may be directed to the Missionaries of Charity, 506 Hancock St., Peoria, IL 61603.