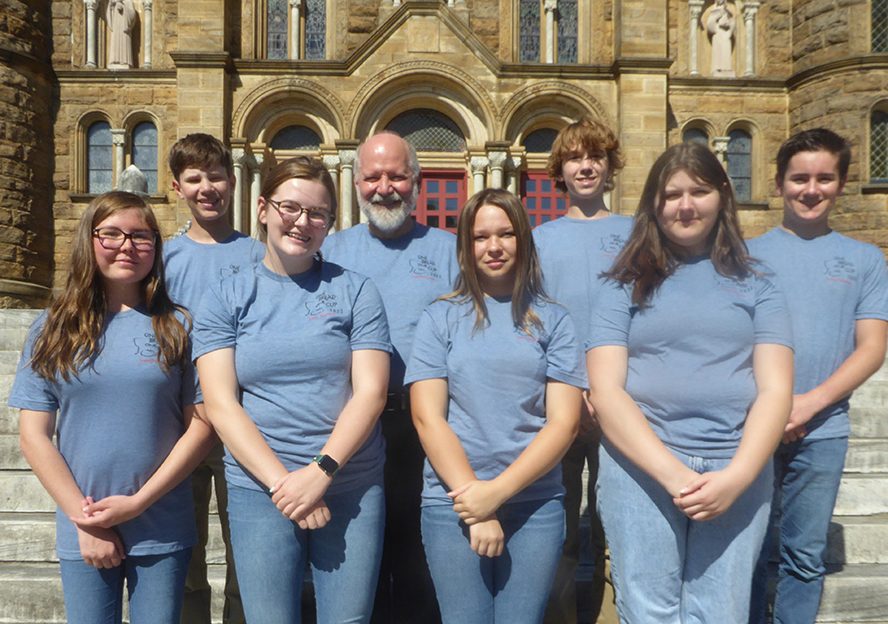 Father Ronald Margherio, OSB, is surrounded by the St. Bede Academy students who attended the "One Bread, One Cup" conference at St. Meinrad Seminary and School of Theology in Indiana. They are (from left) Kaden Nauman, Abraham Wiesbrock, Bella Hagenbuch, Aubrey Siebert, Lacey Griggs and Elizabeth Vanko.Joining them for the week was Ryder Schell. (Provided photo)

PERU — Each summer for the last 13 years, a handful of students from St. Bede Academy have traveled to St. Meinrad Seminary and School of Theology in Indiana to learn more about the Mass and how they can be liturgical leaders in their own community.

Father Ronald Margherio, OSB, chaplain, said he continues to take students to the “One Bread, One Cup” conference because a deeper appreciation for the Mass is what the church needs to thrive.

“I think the bishops are seeing in our country that you have to understand the Mass or know something about it so you yourself can participate more fully and draw others to do things, as well,” he said.

“Also, there’s the dwindling numbers of priests and religious,” Father Ronald said. “We have to be fortifying the church with well-qualified lay people . . . that can step up to the roles of all the things that need to be done liturgically in the church.”

“One Bread, One Cup” offers that gift to high school youth, according to the Benedictine priest, who is a member of St. Bede Abbey.

Father Ronald usually invites freshmen who are going into their sophomore year to consider the opportunity. That way they can use what they have learned to benefit the students at St. Bede Academy for the next three years.

He has taken four students, but this summer he had six who wanted to go. Next year he’d like to take eight.

At “One Bread, One Cup,” the students learn by experience, so the Liturgy of the Hours and Mass are important aspects of each day. Afternoon sessions are devoted to liturgical formation in areas such as music for liturgy, cantor development, preaching for Liturgy of the Hours, proclamation of the Word, liturgical art, and “Prayer in the Life of the Body of Christ.”

There are also opportunities for fun, Father Ronald said.

“I think what it does is give the kids a little bit of confidence when they go back home, that they’ve been trained,” he explained. “Not that they couldn’t do these things in their parish before, which they do, but I think they feel different when they go back.”

And he encourages them to take that leadership seriously.

“They become disciples. I don’t think they realize it, but they become the disciples that draw other people to do things,” he said.

St. Bede students generally go to “One Bread, One Cup” one time. If they want to return, Father Ronald said they are asked to pay their own way.

Junior Bella Hagenbuch was happy to do just that. She had help from her grandmother, Kimberly Barber, who made it part of her Christmas gift.

“I LOVED IT SO MUCH”

Hesitant to go the first time, Bella said, “I loved it so much.”

“I think the thing that took me back was being around likeminded young Catholics who wanted to grow closer to God,” Bella said. “It was such a good feeling that I don’t experience every day, even going to St. Bede. But that love for God was there.”

She was in the group that studied preaching for Liturgy of the Hours the first time and was able to do that at “One Bread, One Cup.” She also has offered reflections for the students at St. Bede.

Bringing what she learned back to the Illinois Valley has helped her to stay focused better at Mass, too.

“I took the readings and I guessed how the priest was going to preach them,” she explained. “I took a shot, like in my own head just thinking, ‘Here’s how I’d do it. I wonder what he’ll say.”

This year, Bella was in the formation group that studied “Prayer in the Life of the Body of Christ” and said, “I essentially learned how to pray.”

“I know that sounds so basic, but I was able to go deeper into what prayer actually means,” she said. “I was actually able to lead Liturgy of the Hours this time.”

Bella’s home parish is Holy Cross in Mendota, where she served at Mass throughout her grade school years. She never really wanted to proclaim the readings before, but says she has a newfound love for public speaking now.

“You bring out things in kids they might not know they have,” Father Ronald said.

For more on “One Bread, One Cup,” visit saintmeinrad.edu/oboc.