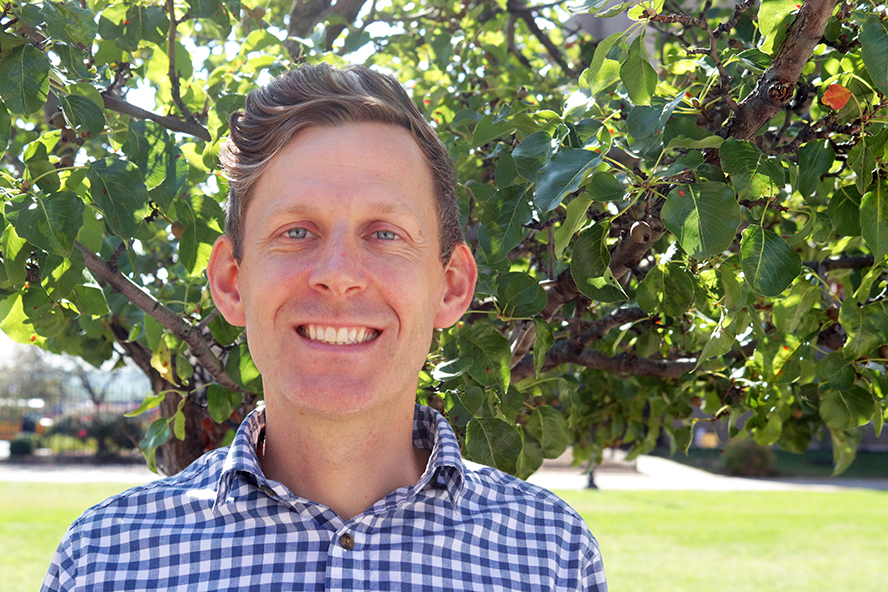 As the Diocese of Peoria's chief of mission, Matt Faley (pictured) will work with Bishop Louis Tylka "to make sure the mission of Jesus is integrated in all that we do in the Curia (diocesan offices) and that it is communicated to our pastoral leaders and laity across the diocese." (The Catholic Post/Jennifer Willems)

Matt Faley started his dream job on Sept. 12. He has been named chief of mission for the Diocese of Peoria.

“If I could create a job description for me and for the gifts that God’s asking me to use, this would be it,” Faley said as he was getting settled in to his office at the Spalding Pastoral Center in Peoria.

As chief of mission, he will work with Bishop Louis Tylka “to make sure the mission of Jesus is integrated in all that we do in the Curia (diocesan offices) and that it is communicated to our pastoral leaders and laity across the diocese,” he explained.

This is considered an unprecedented job, with only one other position of this kind in archdioceses and dioceses across the United States, according to Faley. 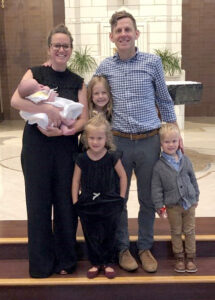 Matt Faley, new chief of mission for the Diocese of Peoria, with his wife Kara and their children Penny, 3 months; Bernadette, 7; Mae, 5; and Gus, 4, at St. Mary Church in Greensburg, Indiana. (Provided photo)

“Of course, there’s much to figure out because it is unprecedented,” he said. “A lot of this will kind of be figured out as we go.”

His work as chief of mission brings Faley home to Peoria, where he grew up in St. Mark Parish. A 2001 graduate of Peoria Notre Dame High School, he attended Illinois Central College and received a degree in English from the University of Illinois in 2005.

Until he and his wife, Kara, and their four young children are able to move into the house they purchased here, they are staying with his parents, Tom and Nancy Faley.

He has been working in ministry full time since 2008, with 10 years spent as director of a young adult ministry outreach for the Archdiocese of Indianapolis. For the last three years, Faley served as executive director of the archdiocese’s Secretariat for Pastoral Ministries, which oversaw five ministry offices and three commissions.

Among the gifts he has enjoyed sharing are songwriting and leading music at youth rallies and conferences around the country. One of them changed his life.

“A year ago in June, I was helping lead music at a conference that was happening in Indianapolis and there was an opportunity to be prayed with at the end of the first night. I stuck around,” Faley recalled.

“God is preparing you and your family for a change and one you would never expect,” said the priest he was praying with. The priest added, “God is telling me to tell you to go back to that one thing and start over.”

He and Kara discerned that returning to Peoria was how he was meant to start over and Bishop Tylka gave him the reason when they started talking last fall.

“I love the opportunity to dream and vision. I just love that — to discern where God is asking us to move right now and into the future as a diocese,” Faley told The Catholic Post.

What makes this an exciting time to do that dreaming and looking ahead is Bishop Tylka’s two-year pastoral planning process called “Growing Disciples.” It is designed to help parishes and schools assess current ministry challenges and what will be needed for a vibrant, sustainable mission-driven church for the future. 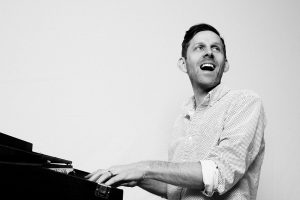 Among the gifts Matt Faley has enjoyed sharing are songwriting and leading music at youth rallies and conferences around the country. (Photo from mattfaley.com)

“The bishop is quoted often: ‘Go make disciples.’ So what does that mean for our day-to-day life? I think to go make disciples in the world, for the world, we have to start where we are right now,” Faley said.

“How I see this role as chief of mission is to work with the bishop to make that vision of living a life of mission clear and attainable for everybody who is ready to do that in our communities.”

Part of that will entail overseeing aspects of pastoral, formational and evangelical work that is done in the Curia and provide structures to strengthen them in order to help them be at the service of the pastoral leaders, he said.

He will also visit priests and hopes to develop relationships that will allow him to flesh out the framework that is already in place. “So much prayer and discernment has to happen,” he said.

Faley’s job is to “be a resource to walk alongside our pastoral leaders in our parish communities and our laity to strategize, vision and make this a lived reality in our communities.”

“This is a long-term commitment, not only for me, but us as a diocese,” he said. “That’s what I’m so excited about.”

The intent is not just to vision out five years, but from now until eternity, according to Faley.

“To be a diocese on mission at the service of the mission Jesus is calling us to,” he said.