Katie Faley: Why ‘Our Lady of Sorrows’ is one of my favorite titles for Mary

Cause of Our Joy / By Katie Faley

Even though we’re more than a week past the feast of Our Lady of Sorrows, I think it’s appropriate to honor this title of Mary all September long.

It’s interesting that this feast falls in the middle of September. When I think of the sorrows of Mary, I tend to think of Lent. Yet we don’t celebrate Our Lady of Sorrows until we’re in the thick of Ordinary Time. It’s almost funny that the church would “force” us to bring up Mary’s sorrows again in the middle of the year when we’re nowhere near Lent.

Focusing on Our Lady’s sorrows may make for a strange devotion, but it has become one of my favorite titles of Mary, all thanks to the time I met a woman with a meaningful name.

I’m a big fan of names, so I’m always fascinated at the ways people honor Mary and the saints through naming. Being a cradle Catholic, I’ve met more Marys than I can count. 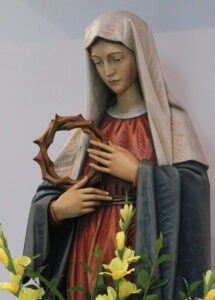 A statue of Our Lady of Sorrows. Columnist Katie Faley says that “Mary is a mother who loves us and knows our hearts — all of the joys and the sorrows.” CNS/Elizabeth Wong Barnstead

When I was working in a parish religious education office a few years ago, I met a woman named Dolores. One day she explained to me that she and all of her sisters were named for different titles of Mary. I didn’t know at first what Marian title Dolores was named for, but she told me it was for Our Lady of Sorrows. I remember thinking, “Well, that’s a real downer to get the name that means sorrow.”

If I were her, I would’ve thought, “How come I didn’t get one of the more joyful titles of Mary to carry around for the rest of my life?”

It especially didn’t make sense to me because Dolores wasn’t sorrowful. She was exuberant, passionate about service, and treated me and all the young people at our parish like we were her own children.

I had never given much thought to Our Lady of Sorrows and what that title really meant, but it was Dolores who got me to realize how much more this title of Mary means.

We focus on the seven sorrows of Mary on this feast day: Simeon prophesying that a sword would pierce Mary’s heart, the flight into Egypt, losing Jesus in the temple for three days, Jesus meeting Mary while carrying the cross, Jesus’ death, the body of Jesus being taken down, and the burial of Jesus. Those are some heavy moments for anyone, but especially a mother.

For that reason, I consider Our Lady of Sorrows to be one of Mary’s most “maternal” titles.

When Jesus was dying on the cross, He gave John to Mary as her son, and Mary to John as his mother. In this moment, Jesus was symbolically giving Mary as a mother to all.

It was in the darkest moment of the world that Jesus gave us His mother. And it was during His mother’s most sorrowful hour that she became our mother.

My mom likes to say “a mother is only as happy as her saddest child.” I imagine this to be true of our Heavenly mother, as well. Mary lived a fully human life. She understood human struggles.

She probably knew what it was like to wake up with a stiff neck, have her stomach growl because she was hungry, be stuck in a conversation when all she wanted was some peace and quiet, and other fully human experiences.

She not only understands us in our small and big struggles. She feels those sorrows and struggles right along with us as a mother. She knows what it’s like to only be as happy as her saddest child. It was all part of her “yes” when she agreed to be the mother of the Son of God. She is a mother to us now, thousands of years later. When we fall, she runs to us like a mother running to a toddler who’s fallen.

It’s such a comfort to know that we never have to carry our own struggles alone. Mary is a mother who loves us and knows our hearts — all of the joys and the sorrows. And that’s why Our Lady of Sorrows is not a “downer.”

KATIE FALEY is a member of St. Mark Parish in Peoria and a writing coordinator for OSF HealthCare. She has a master’s degree in theology and theological studies from the University of Notre Dame. Write to her at katiefaleywriter@gmail.com.