‘Joy for everyone’ as Sr. Mary Clare Key, DSF, professes her final vows in Lacon 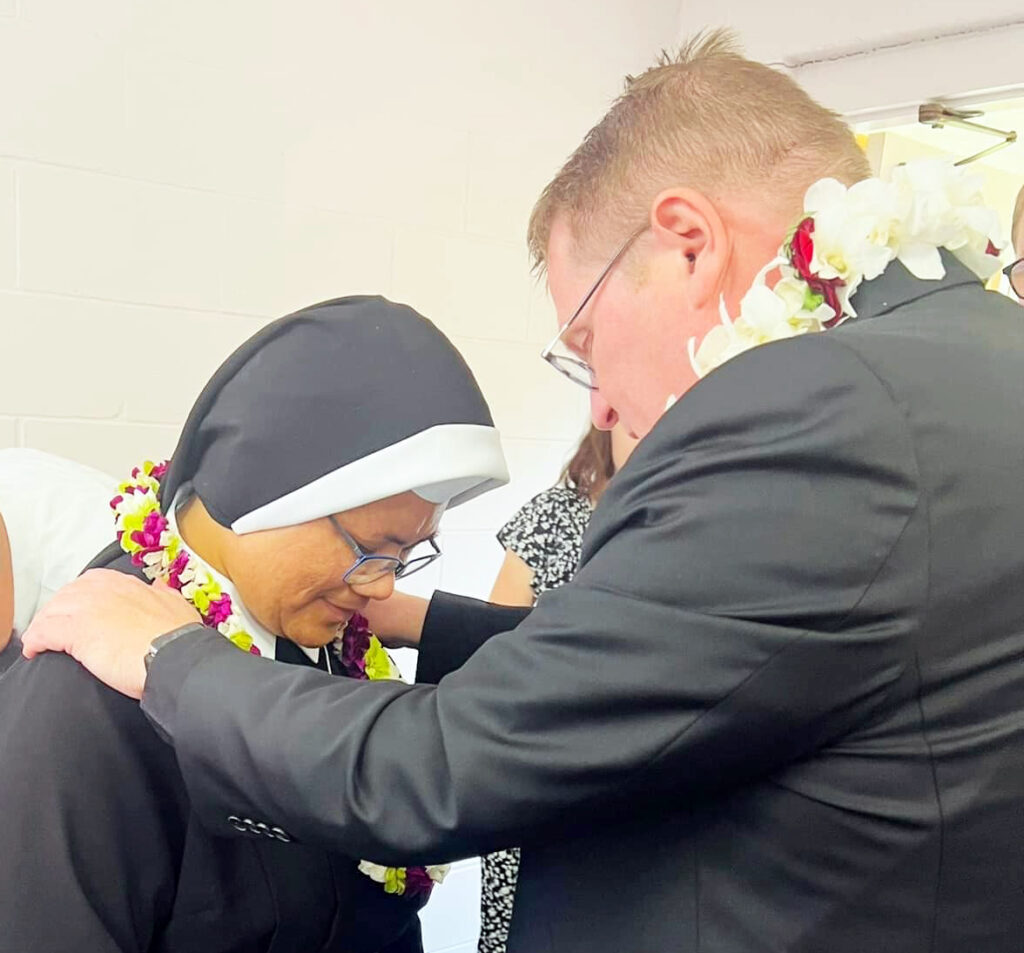 Bishop Louis Tylka offers a blessing to Sister Mary Clare Key, DSF, after the Samoa native professed her final vows with the Daughters of St. Francis of Assisi at the American Region’s motherhouse in Lacon on Aug. 15. Provided photo

LACON — On the day she made her First Communion, Sister Mary Clare Key, DSF, felt so connected to Jesus that she wanted to take him home with her. The priest made sure she consumed the Body of Christ then and there, but the desire to be close to the Lord continued.

On Aug. 15, she made that union official by professing her final vows with the Daughters of St. Francis of Assisi at the American Region’s motherhouse here. Receiving her vows was Mother Chiara, mother general of the international Franciscan community, and Bishop Louis Tylka placed a ring on her finger and offered a blessing.

“My favorite part of the whole ceremony was the Litany of the Saints,” Sister Mary Clare said. “When I heard the names of all the saints, I knew I wasn’t alone. The anointing was so strong I almost fell over.”

She added that she felt the spirit of St. Francis and St. Clare leading the company of saints that day, as she knelt before the altar.

“How cool is it that I have all the saints accompanying me and receiving me and walking with me from now on,” she said.

The word “final” does not mean that her formation is over, however. That continues for a lifetime.

“I have to persevere. It’s the beginning of your whole life and there’s something greater waiting for us,” Sister Mary Clare explained.

The Daughters of St. Francis of Assisi profess their final vows on Aug. 15, the Solemnity of the Assumption. Since there was also a Sister making her final vows at the motherhouse in Slovakia, Sister Mary Clare accepted the fact that Mother Chiara probably wouldn’t be able to come for her profession. 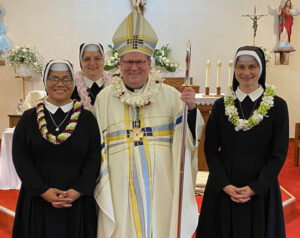 It was God who nudged Mother Chiara in prayer and sent her to Lacon to be with Sister Mary Clare. The surprise actually worked out for both women making final vows. The community in Lacon watched the livestream from Slovakia and then the community in Slovakia watched Sister Mary’s Clare’s Mass and profession later in the day.

“I feel like the body of Christ was so connected,” she said.

“The whole community was with us, rejoicing, because this is not my vocation. This is a vocation for the whole world. . . . They are rejoicing because it is a new life,” Sister Mary Clare told The Catholic Post. “Something bloomed here in America. It’s a joy for everyone, not just for me.”

She said she knew she had found where she belonged from her very first visit to Lacon at the invitation of Sister M. Loretta Matas, DSF, who said, “come and see.”

Born and raised in Samoa, Allua Telesia (Sia) Key had many relatives who were in consecrated life or the priesthood at home. She discerned with the Disciples of the Lord Jesus Christ in Texas, but didn’t feel called to that community.

Looking up religious communities online, she came across the small Franciscan community in Lacon. After reading their mission, she thought, “This is something I would like to do.”

During her two-week visit, the Sisters gave her the opportunity to work at St. Joseph’s Nursing Home and she fell in love with the residents.

“I was like Mary at the foot of the cross, taking care of those people. I didn’t want to leave,” she recalls.

What spoke to her was the way of life of the small community, with its simplicity and commitment to unity in prayer and everything else.

In Samoa, the elderly are looked after by their families, so she was happy to adopt the residents at the nursing home and sit and pray with them up until the last moment of their lives.

Now Sister Mary Clare is a junior at Bradley University and studying to be a social worker. She will graduate in December 2023 and hopes to work with Catholic Charities of the Diocese of Peoria.

She also ministers to the youth group at Immaculate Conception Church in Lacon.

“It’s been a long journey. It’s not easy. It requires faith, trust and perseverance,” Sister Mary Clare said. “That’s how you have the consistency of knowing where you’re going and knowing your vocation — and knowing yourself. That’s the key.”