Catechists recognized in Bloomington, around diocese, for passing on the faith 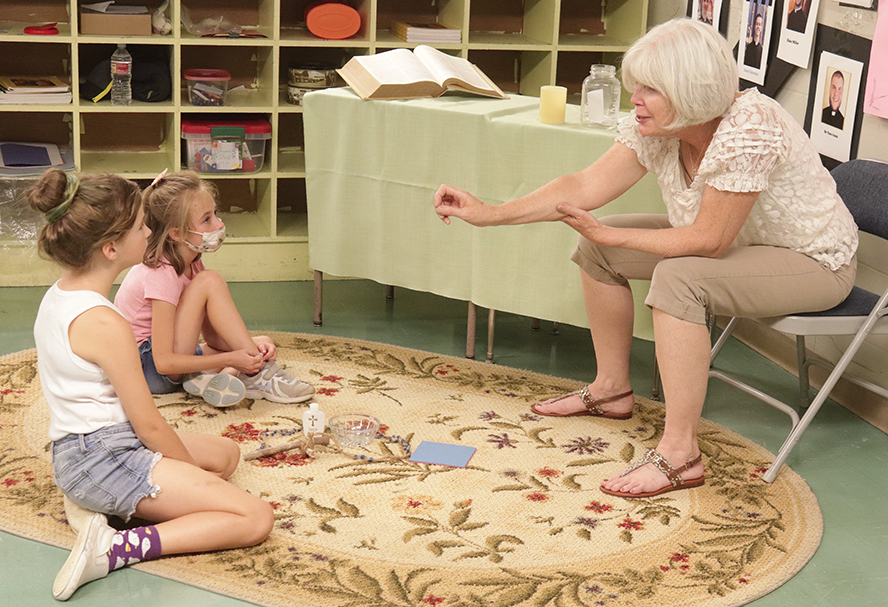 Gathered in their prayer circle, Scarlet Dennis and Brooklynn Nolan learn about the importance of their souls and how to feed them from catechist Jean Deal as part of the religious education program at Holy Trinity in Bloomington. (The Catholic Post/Jennifer Willems)

BLOOMINGTON — Each Wednesday night, there is a buzz on the second floor of the St. Vincent de Paul Building at Holy Trinity Church. In this case, the nourishment is being provided to young souls who are learning more about Jesus and the love of God.

They are among more than 5,600 religious education students being ministered to in parishes around the Diocese of Peoria. Their catechists and parents, as well as Catholic school teachers and those involved in the Order of Christian Initiation of Adults, were recognized for all they do last weekend as part of Catechetical Sunday.

The theme for this year’s celebration also focused on spiritual nourishment by calling to mind the Gospel of Luke: “This is my body, given for you.”

A love for God, the church and her sacraments is what has kept Lucy Reynolds, coordinator and director of religious education at Holy Trinity, coming back for more than 30 years.

“I love seeing the children going through First Holy Communion and receiving Jesus for the first time and seeing their faces,” Reynolds told The Catholic Post. “That’s everything. That’s when you know you’ve done something right.”

And then there are the eighth-graders preparing for the sacrament of confirmation.

“Even seeing them nervous and then excited afterward — again, you know they got it,” she said. “It’s that exclamation point of they got it!”

Reynolds is quick to give credit to those who trained her and taught her the “tried and true” methods she still uses to this day. They include longtime director of religious education Sharon Priester, Sister Audrey Cleary, OSB, and Father John Dietzen, the pastor who interviewed and hired her. 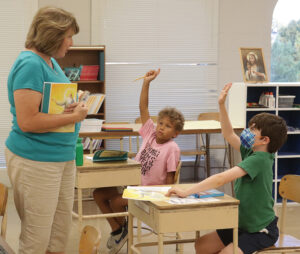 Second-graders Carlos Toribio and Ronan Moran-Williams got off to a fast start in Amy Miller’s room on the first night of religious education classes at Holy Trinity in Bloomington. (The Catholic Post/Jennifer Willems)

“I’ve been very blessed by being surrounded by very good people and servants that have opened their arms to me and helped me and showed me the way. It was given to me and I need to share that with others, too,” she said.

Father Jeffrey Stirniman, pastor, stops by the classrooms almost every week, and Reynolds said she appreciates his active interest. So do the catechists and the children, she added.

“The second-graders, when they come for their First Reconciliation, all pile in line to go to him because he spent time with them,” she said. “Not everybody is running to reconciliation!”

And when Reynolds is tied up with something, Father Stirniman just jumps in — “What do you need?”

He can be counted on to tell the students, “Say your prayers and I’ll see you in church,” as he leaves each classroom.

Father Stirniman told The Catholic Post he makes it a point to be visible and available to the children and their parents so they get to see that their spiritual leaders are human. Jesus was good at this, he said.

The priest emphasizes that while he is responsible for sharing the faith, the primary educators are the parents.

Being present to them “is a good way to remind parents that they have an important task. It’s a serious moral obligation,” Father Stirniman said. “Hopefully they embrace it. Hopefully they’re living it as an example.”