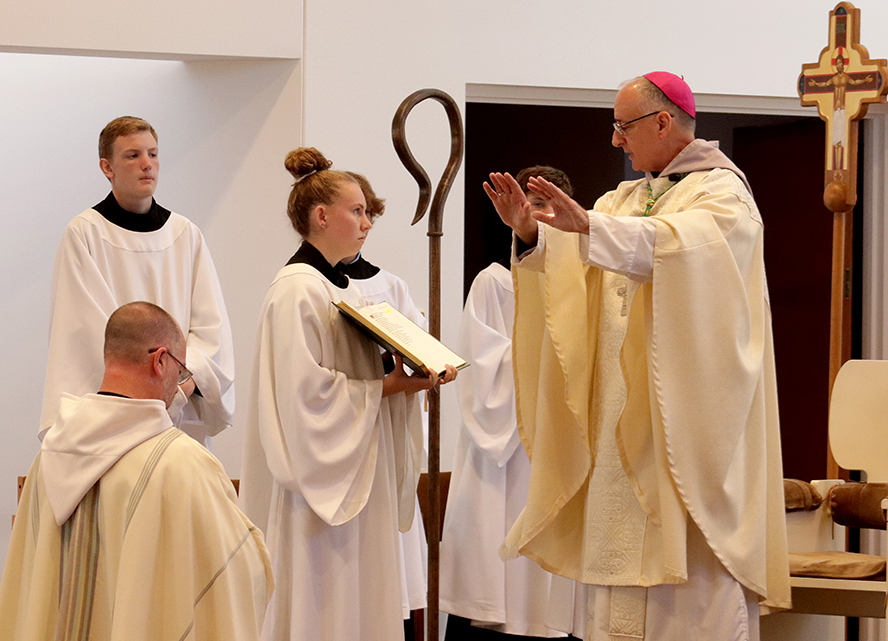 As Abbot Michael Calhoun, OSB, kneels before him, Bishop Robert J. Lombardo, CFR, offers a prayer of blessing. The Abbatial Blessing was celebrated at a Mass in St. Bede Abbey Church on Sept. 3. (The Catholic Post/Jennifer Willems)

PERU — Saying that he would rely on the Holy Spirit to reveal in time how he could best serve the Benedictine community at St. Bede Abbey, newly consecrated Abbot Michael Calhoun, OSB, gave thanks for the gift of stable and consistent leadership the monks have enjoyed over the years.

“I have been blessed with a number of good examples of leadership,” he said, mentioning Abbot Marion Balsavich, OSB, who was abbot when he was a student at St. Bede Academy, as well as Abbot Roger Corpus, OSB, Abbot Claude Peifer, OSB, and Abbot Emeritus Philip Davey, who retired in April. “God willing, their example has formed me into the kind of abbot I need to be for St. Bede.” 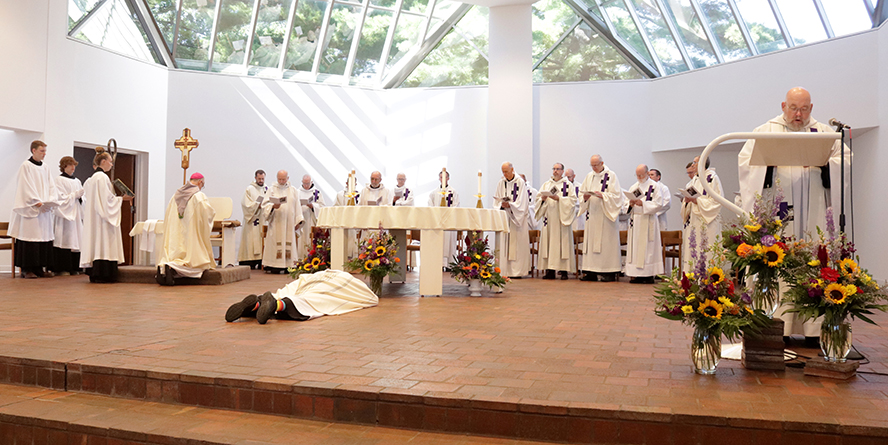 Abbot Michael M. Calhoun, OSB, prostrates himself on the sanctuary floor of St. Bede Abbey Church in Peru, while Father Dominic Garramone, OSB, prior, leads the Litany of the Saints. (The Catholic Post/Jennifer Willems)

Abbot Michael was elected to succeed Abbot Emeritus Philip and become the ninth abbot of St. Bede on July 13. His abbatial blessing was conferred by Auxiliary Bishop Robert J. Lombardo, CFR, of Chicago, on Sept. 3 in the St. Bede Abbey Church.

Among those wishing him well was Bishop Louis Tylka, who could not be present because he was attending the Annual Course of Formation for New Bishops in Rome. He sent a letter of congratulations and support to Abbot Michael, which was read by Bishop Lombardo.

“As you assume the responsibility of leading the monks of St. Bede Abbey, there are many challenges we face as the church today. Whether it be in the abbey, in the church, or in society at large, the challenges we are confronted with are also opportunities for us to invite the new expression of God’s love in the world,” Bishop Tylka wrote.

He encouraged the new abbot to return often to the words of St. Benedict, who offered “great wisdom on leadership” in his Rule.

“I would simply encourage you to always be the servant-leader that is called for by St. Benedict, the church, and especially your community,” Bishop Tylka said. “I look forward to our working together in the future so that as faithful disciples our lives may bear fruit for the kingdom of God.”

The Rite of Abbatial Blessing took place after the Gospel had been proclaimed. Abbot Michael was presented to Bishop Lombardo and it was Abbot Emeritus Philip who asked the bishop to bless him as the abbot of the monastery and testified that he had been duly elected. 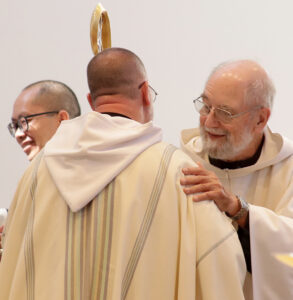 In his homily, Bishop Romero also told Abbot Michael, “We are called to be servant-leaders.”

But it is also important to remember that Jesus went in and cleared out the temple, too, he said.

“What great advice. And how important that is for any of us in leadership. Be kind to the people,” Bishop Romero said. “I encourage you to be kind to your fellow monks here, to the faculty and to the students. Be kind, but don’t be afraid to lead.”

He also asked the monks of St. Bede to be kind to Abbot Michael in return — to listen to one another and work through disagreements “for the good of the church and greater glory and honor of God.”

He also asked the guests gathered in the abbey church to be kind to Abbot Michael and spread the word, “because that kindness goes a long way.”

“GOING TO BE WONDERFUL”

After the homily, the Rite of Abbatial Blessing continued, with Bishop Romero examining Abbot Michael through a series of questions. As the Litany of Saints was sung, the new abbot prostrated himself on the sanctuary floor, and then knelt in front of the bishop for the prayer of blessing.

Abbot Michael would also receive the Rule of St. Benedict and have a miter placed on his head by Bishop Romero. In addition, he received a ring and a pastoral staff or shepherd’s staff.

A Kiss of Peace followed, with Bishop Romero and the visiting abbots from around the country embracing Abbot Michael. As their new “spiritual father” he then exchanged a sign of peace with the members of the St. Bede community. 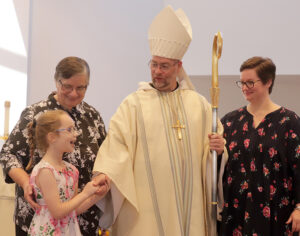 There was a pontifical blessing for Abbot Michael at the end of Mass.

In his remarks, Abbot Michael noted that the ring he chose had been cast during the term of Abbot Roger, the sixth abbot. He added that he’s decided to carry the crosier belonging to Abbot Lawrence Vohs, the third abbot of St. Bede Abbey.

He spoke of each of his eight predecessors and what they had accomplished.

Colette Spears, who was his godmother when he was received into the Catholic Church as a teen, has no doubt that Abbot Michael will do that well.

“Today was outstanding. I’m just so impressed,” she told The Catholic Post. “You can see how confident he is and how he has grown. He’s going to be wonderful.”