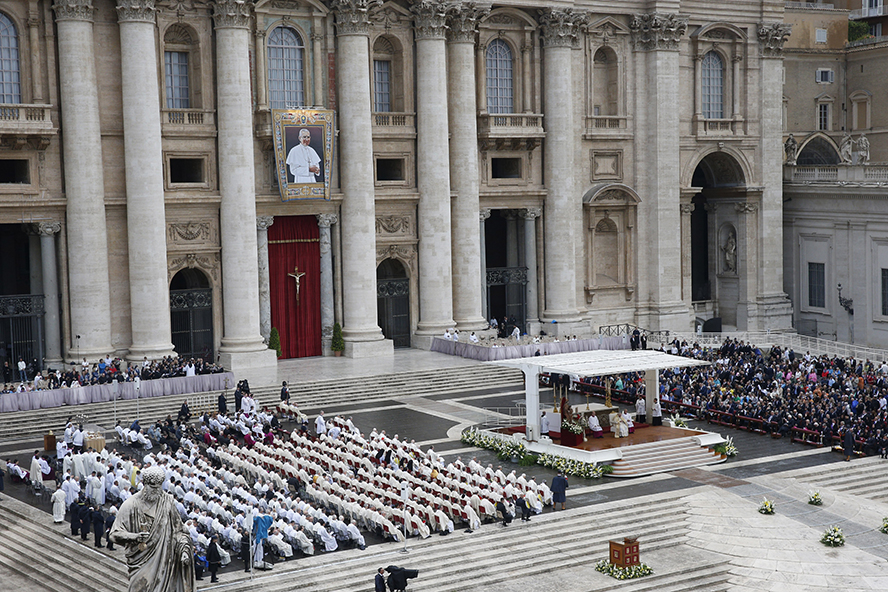 Pope Francis leads the beatification of Pope John Paul I in St. Peter's Square at the Vatican on Sept. 4. (CNS/Paul Haring)

“Our new blessed lived that way: in the joy of the Gospel, without compromises, loving to the very end,” the pope said during a homily in St. Peter’s Square at the Sept. 4 Mass. 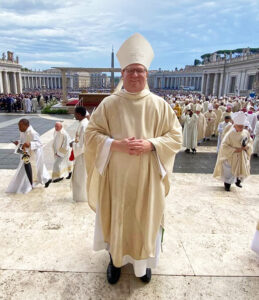 Bishop Louis Tylka of Peoria was among those present at the Vatican for the beatification of Blessed John Paul I. The darks skies and rain “did not dampen the joy of lifting up the ‘Smiling Pope,’” said Bishop Tylka, adding that he was “humbled to be with the universal Church for such a celebration.” (Photo from Bishop Tylka’s Facebook page)

“He embodied the poverty of the disciple, which is not only detachment from material goods, but also victory over the temptation to put oneself at the center, to seek one’s own glory” as he followed the example of Jesus and was “a meek and humble pastor,” Pope Francis said.

Blessed John Paul, an Italian who was born Albino Luciani, served only 33 days as pontiff in 1978; he died just three weeks shy of his 66th birthday, shocking the world and a church that had just mourned the death of St. Paul VI.

Although his was one of the shortest papacies in history, Blessed John Paul left a lasting impression on the church that fondly remembers him as “the smiling pope.”

“THE SMILE OF THE SOUL”

The beatification Mass was attended by an estimated 25,000 people under dark skies and rain, with an occasional roll of thunder and clap of lightning.

Among those present was Bishop Louis Tylka of Peoria, who was in Rome for training sessions for new bishops as well as talks regarding a hoped-for future beatification — that of Venerable Archbishop Fulton J. Sheen.  The rain during the Mass “did not dampen the joy of lifting up the ‘smiling pope,’” said Bishop Tylka via his Facebook page, adding that he was “humbled to be with the universal Church for such a celebration.”

With a smile, Pope John Paul managed to communicate the goodness of the Lord, said Pope Francis. “How beautiful is a church with a happy, serene and smiling face, a church that never closes doors, never hardens hearts, never complains or harbors resentment, does not grow angry or impatient, does not look dour or suffer nostalgia for the past.”

“Let us pray to him, our father and our brother, and ask him to obtain for us ‘the smile of the soul'” that is “transparent, that does not deceive,” Pope Francis said. “Let us pray, in his own words, ‘Lord take me as I am, with my defects, with my shortcomings, but make me become what you want me to be.'” 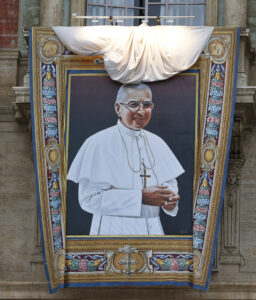 A banner showing Pope John Paul I is unveiled on the facade of St. Peter’s Basilica as Pope Francis leads the beatification of the late pope in St. Peter’s Square. (CNS/Paul Haring)

During the beatification ceremony, which took place at the beginning of the Mass, an image of the new blessed was unveiled on a huge tapestry affixed to the facade of the basilica. The image was a reproduction of an oil painting, “The Smiling Pope,” created by Zhang Yan, a Chinese artist whose work combines Eastern and Western painting techniques.

The relic, carried by Lina Petri, the niece of the late pope, was a piece of paper, yellowed with age, upon which the pope had written an outline for a spiritual reflection on the three theological virtues — faith, hope and charity — the themes of three of his only four audience talks.

The materials for the reliquary, a sculpted wooden cross on top of a smooth stone, were taken from where Blessed John Paul was born and grew up in northern Italy.

In his homily, Pope Francis connected the day’s Gospel reading to the humble and Christ-centered way Blessed John Paul lived his life and to how Christians today are called to live their lives.

The pope said Jesus attracted large crowds with his teachings, but he did not exploit this popularity the way some teachers or leaders do when they see people look to them as a source of hope for the future.

God, he said, “does not exploit our needs or use our vulnerability for his own aggrandizement. He does not want to seduce us with deceptive promises or to distribute cheap favors; he is not interested in huge crowds. He is not obsessed with numbers; he does not seek approval; he does not idolize personal success.”

Christians should examine the reasons they follow the Lord, he said, and make sure they are not seeking: the satisfaction of their own needs; personal prestige; social status or control; power and privilege; recognition and so on.

Christians must “love even at the cost of sacrifice, silence, misunderstanding, solitude, resistance and persecution,” he said. Because, as Blessed John Paul said, “if you want to kiss Jesus crucified, ‘you cannot help bending over the cross and letting yourself be pricked by a few thorns of the crown on the Lord’s head.'”

Among the family members and devotees who carried candles to place before the relic was Sister Margherita Marin, a member of the Congregation of the Sisters of the Child Mary, who assisted in the papal apartments and was one of sisters who found the deceased pope Sept. 28, 1978.

Candela Giarda, the young Argentine woman whose miracle cleared the path for Blessed John Paul’s beatification, was unable to come to Rome because of a fractured foot from playing sports. She was 11 years old when she developed a severe case of acute encephalitis, experienced uncontrollable and life-threatening brain seizures, and eventually entered septic shock.

After doctors told family members her death was “imminent,” Father Juan José Dabusti, who attended the beatification ceremony, encouraged the family, nurses and others to pray to the late pope for his intercession. In 2011, a panel of experts studying the cause determined there was no scientific explanation for her complete recovery and that it could be attributed to the late pope’s intercession.