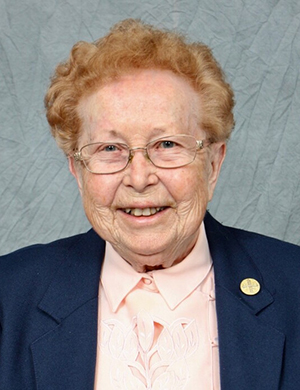 ROCK ISLAND – A Mass of Christian Burial will be celebrated on Tuesday, Aug. 30, in the chapel of St. Monastery here for Sister Charlotte (Angela) Sonneville, OSB. Burial will follow in Calvary Cemetery, also in Rock Island.

The wake and Mass will be open to the public, but seating is limited. Those who would like to attend are asked to call St. Mary Monastery at (309) 283-2102.

In addition, the funeral Mass will be livestreamed from the Facebook page of the Benedictine Sisters of St. Mary Monastery.

Sister Charlotte died on Monday, Aug. 22, 2022, at UnityPoint Health-Trinity in Rock Island. She was 92.

The daughter of Charles Louis and Marguerite (Cauwels) Sonneville, Sister Charlotte was born Dec. 21, 1929, in Moline. She entered the Benedictine community on Nov. 1, 1947, and made her profession as a Sister of St. Benedict on July 11, 1949, at St. Mary Monastery in Nauvoo.

When Sister Charlotte celebrated her 70th anniversary of consecrated life in 2019, she said the Benedictine Sisters she had in school “showed such a love of God, of each other, and genuine love and concern for us students that I wanted to dedicate my life to serving God in the same way.”

Sister Charlotte graduated from St. Mary’s Academy in Nauvoo. She received a bachelor’s degree in music education from the University of Illinois, did advanced studies in guidance and counseling at Loras College in Dubuque, Iowa, and earned a master’s degree in religious education from Loyola University Chicago.

Sister Charlotte was also pastoral associate for adult education and liturgy director at St. Patrick, LaSalle (1988-91). While there, she founded the Illinois Valley Food Pantry in LaSalle and began Beginning Experience for the LaSalle/Peru area.

She was the pastoral associate for adult education and liturgy director at St. Joseph Parish in Pekin (1991-94), and at St. Ambrose Parish in Milan (1994-2004). Sister Charlotte would also serve her Benedictine community as liturgy director and director of Benet House Retreat Center at St. Mary Monastery (2004-14).

Preceded in death by her parents and brothers Arthur, Joseph and Charles Jr., Sister Charlotte is survived by her Benedictine Sisters, and nieces, nephews and cousins.