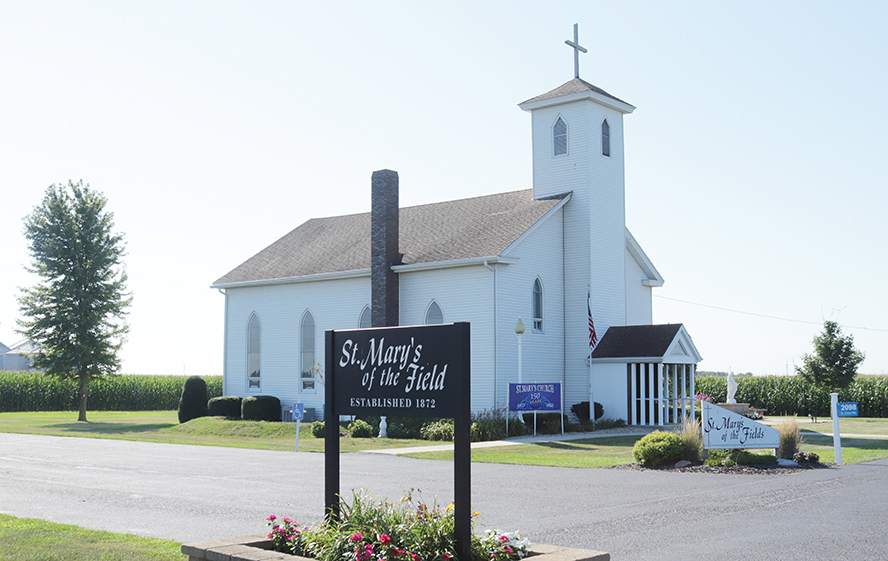 St. Mary of the Fields Church in Grand Ridge, built in 1872, is still a beacon of faith in the fields of rural Grand Rapids Township. (The Catholic Post/Jennifer Willems)

GRAND RIDGE — One of the oldest churches still in use in the Diocese of Peoria, St. Mary of the Fields in rural Grand Rapids Township east of Grand Ridge, will host a Mass on Sunday, Sept. 4, to celebrate its 150th anniversary. 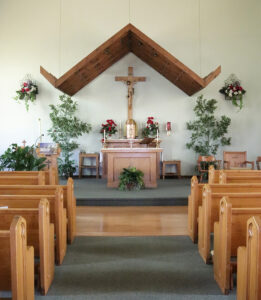 The sanctuary of St. Mary of the Fields Church in Grand Ridge. (The Catholic Post/Jennifer Willems)

Msgr. Philip Halfacre, vicar general of the Diocese of Peoria, will be the principal celebrant of the 1 p.m. liturgy. Father Sixmund Henry, administrator, will be among the concelebrants, with several former or area pastors also invited to take part.

The Mass will be followed by a dinner at 2:30 p.m. on the spacious lawn of the historic white frame church, whose gold steeple cross can be seen from miles away. Those wishing to attend the dinner should RSVP to Cheryl Durdan by text at (815) 488-3003.

Many of the 82 families now comprising St. Mary of the Fields Parish are descendants of the founding families present when the first Mass was celebrated in the church on June 9, 1872.  A cannon was reportedly discharged in an adjoining field in celebration as that first Mass began.

Before the church was built, Catholic Irish and German settlers attended Mass by making the 18-mile trek on foot or by horse to Ottawa, being ferried across the Illinois River. “Sometimes they came after services were over, especially if the ferry was on the opposite side of the river when they reached the south bank,” according to a parish history published in 1972 for the church’s centennial.

St. Mary of the Fields has never had a resident pastor. It has been served through the years by priests residing in Ottawa, Ransom, Marseilles, Streator, and Seneca. 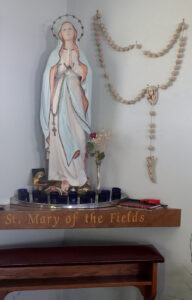 A Blessed Mother Chapel was part of an addition to the church in 1982. (The Catholic Post/Jennifer Willems)

The church was remodeled for the 1972 centennial celebration and has been updated several times in ensuing years. In 1982, the ceiling was lowered and a Blessed Mother Chapel, an office, and a bathroom were added to the south side of the structure.

In 1989, a rosary garden was added on the church lawn that includes a statue of Mary, with benches and prayer plaques along each side and a large rock with a silhouette of the face of Jesus. It is the site of an annual May Crowning ceremony. Coadjutor Bishop John J. Myers presided at a Mass and blessing of the rosary garden that fall.

The entrance to the church was updated in 2002, and the altars and crucifix were replaced in 2007. New signs and planters were added to the church yard in 2009.

Last summer, some roof damage was repaired and the gold cross atop the steeple was given a fresh coat of paint. Noting Catholics were just beginning to return to Mass after the COVID pandemic, parishioners Phyllis and Bill Durdan told The Catholic Post that “in this uncertain time in our country . . . what a wonderful way to lead (Catholics) back — to look for that beautiful cross on our very old country parish.”

There have been four religious vocations from the parish.