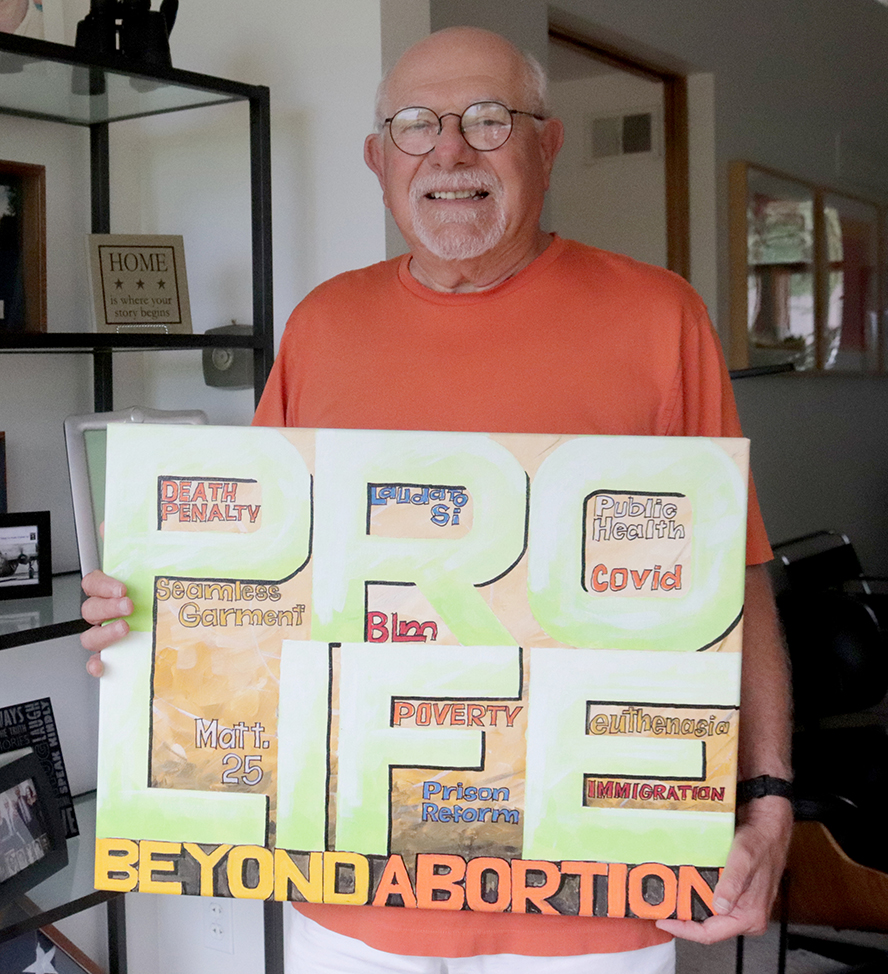 Jim Matarelli of Peoria holds his first painting, which expands the discussion about what might be considered pro-life issues. He has also addressed prison reform, the Eucharist, and Jesus' exhortation to "Be Not Afraid." (The Catholic Post/Jennifer Willems)

While he could draw a little, retired architect Jim Matarelli of Peoria didn’t pick up a paint brush until two years ago. What has poured out of his heart and onto canvas is a lifetime of experience applied to Catholic social teaching and a desire to expand the conversation about a variety of issues.

Among them are respect for life, prison reform and prison ministry, and service, starting with life.

“I started these (paintings) in the summer of 2020, in the middle of the (presidential) campaign,” he said. “Being a pro-lifer what I see — and not everybody sees it and I understand that and I don’t want to be political — I see it as a much bigger issue.

“The death penalty is a pro-life issue to me. Pope Francis and ‘Laudato Sí’ and all of the environmental issues, those are pro-life issues to me. Matthew 25 is all about pro-life,” Matarelli explained. “It’s about helping people. It’s about lifting up people.”

Noting that it can be antagonistic to some, he added Black Lives Matter, immigration, prison reform and attacking poverty to the list.

“It bothers me when it’s seen as such a very narrow issue,” he told The Catholic Post. “I go back to Cardinal (Joseph) Bernardin, who talked about a seamless garment. Even Pope Francis is very open to many of these other pro-life issues.”

Matarelli emphasizes that he is completely anti-abortion and his long marriage to his wife, Colleen, attests to that. They have six children, and three of them are adopted.

In fact, their oldest son came into their lives through adoption in 1972, and he shudders to think about what could have happened if abortion had been legal then and his mother had not chosen life.

“So we were always very, very pro-life, but more than just anti-abortion,” he said.

The Matarellis went on to have two daughters and then adopted two brothers unexpectedly. It happened so fast that when he went to work at Phillips Swager Associates one morning he had three children and when he came home he had five. 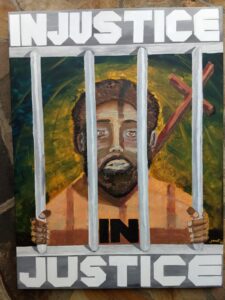 He and Colleen now have nine grandchildren and one great-grandson.

His concern for prison reform came from his life’s work of designing justice facilities around the country, including prisons, jails, courthouses, and police stations. More than building facilities that would “warehouse” people, he was committed to making the facilities places that were “just, constitutional and would be conducive to correcting people’s lives.”

An example of his work is the federal correctional facility in Pekin.

Matarelli also had personal experience. One of his adopted sons, born with fetal alcohol syndrome and abused before he came to them, was incarcerated.

As he started to think about retirement, Matarelli got involved in the Jobs Partnership Program at the Peoria County Jail. The goal of the program is to help the men learn how to get and keep a job and develop skills in maintaining relationships, communication, and conflict resolution, among other things.

“We had waiting lists of people wanting to come into the program before COVID shut it all down,” he said. “It was having an amazing effect on the people in the jail — so much so that the staff were noticing the difference in the people in our program.”

One of his paintings, “Injustice in Justice,” hangs there. It was created for a Lenten series on the Stations of the Cross, presented at Holy Family Church in Peoria in 2021. 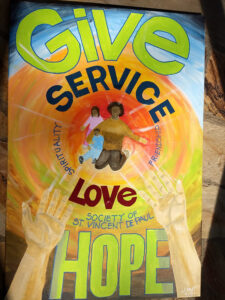 Another of Matarelli’s paintings focuses on the Eucharist and contains a small mirror in the center to represent that we are the body of Christ in the world. Featured in this painting, which was created for another series at Holy Family, are the Cursillo practices of piety, study and action.

To recall the Matarellis’ work with the St. Vincent de Paul Society at St. Thomas the Apostle Parish in Peoria Heights, his lifelong parish, he created a piece that shows outstretched hands and the words, “Give Service, Love, Hope.”

Matarelli grew up in Peoria Heights and lives in a house that was once on his paper route. His parents owned Matarelli Grocery Store and he still has the cash register.

He went to St. Thomas the Apostle School and when it came time to redesign and build a new sanctuary for the church, he helped.

In addition to Cursillo, he and Colleen have been active in Pre-Cana, Engaged Encounter and Marriage Encounter.