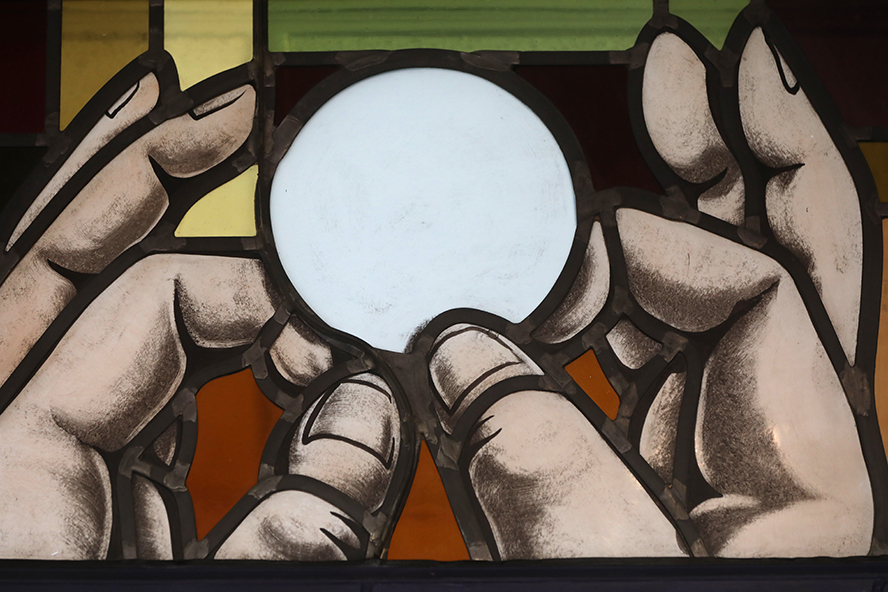 Elevation of the Eucharist is depicted in a stained-glass window. (CNS/Bob Roller)

Lately, I have been blessed with some incredible witnesses who have helped me more fully appreciate the reality of Christ in the Eucharist. I will call them my “4 Ps of Presence.”

The first came from a noted Catholic Preacher, the second from my local parish Priest, the third I encountered in the Printed word, and the fourth was Person-to-Person.

Bishop Robert Barron gave an address on the Real Presence of Christ in the Eucharist at the 2020 Religious Education Congress in Los Angeles. Someone suggested I check it out on YouTube. However, upon noticing the length of the video — an hour and 12 minutes — I paused. I wasn’t sure I needed that much education.

I’m glad I clicked, because before that video was over, something in me clicked with a deeper level of appreciation for the greatest mystery in the universe. In any other instance — any other instance — that would be hyperbolic language, but the true story of the Lord’s sacrifice and rebirth at every Mass is more marvelous than the tale of any comic book superhero could ever pray to be.

Bishop Barron combines a rigorous but easy-to-follow scholarship with a “what happened next” suspenseful narrative in explaining how the actual physical presence of Our Lord in the bread and wine was foreshadowed in the Old Testament, proclaimed in the New, and has been defended against all doubters ever since. It’s a spellbinding spiritual stroll.

A PRIEST’S SERMON, THE PRINTED WORD

Then my parish priest chimed in with a sermon on the Eucharist. He recounted how he had not been a particularly devout teenager, but that started to change one day when he found himself at Mass with a couple of friends. He didn’t know why (other than by the Grace of God, of course) but this Mass affected him as never before.

As he beheld the Consecration, the bread became real flesh, the wine real blood, and the knowledge of it became real in his heart. His testimony brought to my mind the responsorial psalm, “If today you hear his voice, harden not your hearts.”

My next baptism in the truth of the Eucharist came via the printed word through two monthly Catholic magazines: the “Magnificat” spiritual guide, and Columbia, the magazine of the Knights of Columbus (non-members can subscribe).

In “Magnificat” I read a meditation from a letter St. Peter Julian Eymard had written to a friend, “As for Communion, don’t let any pass by through your own fault. You need them . . . go with your weaknesses and poverty. This is your admission ticket. . . .”

The poor. We come in many shapes and sizes. Invariably, the poor minister to our poverties as God privileges us to minister to theirs. My fourth “P” lesson in His Real Presence — and the most powerful — came person-to-person in the outstretched hands waiting for their Lord when I distribute Communion in our retirement community. Most residents can’t get out to Mass, which they would much prefer, naturally, but they are beyond thankful that He has come to them.

I’ve learned about heartfelt appreciation for the Eucharist in the faces and sometimes faint voices of those poor in memory, mobility . . . or both. No matter how much of an inconvenience, whether meals are momentarily delayed, or TV shows turned down (often Sunday Mass), they always want to receive.

I’ve learned about heartfelt appreciation for the Eucharist in the faces and sometimes faint voices of those poor in memory, mobility . . . or both. No matter how much of an inconvenience, whether meals are momentarily delayed, or TV shows turned down (often Sunday Mass), they always want to receive.

The only thing to which I can compare it — respectfully — is the wonder and awe in the faces of children on Christmas Eve at the prospect of catching a glimpse of Santa. That childlike wonder remains in the faces of His more “mature” children as they prepare to greet Jesus.

There is one woman, Mary, who responds to the nurse’s news that “Catholic Communion is here” like a thirsty person who hears that living water has arrived. She truly longs for the Lord. I believe the reverence with which she and other residents receive Jesus in the Eucharist helps to mitigate His suffering for souls as expressed in those most poignant of words from the cross, “I thirst.” (John 19:28)

Anyone with lingering doubts about the Real Presence should see the faces I see on Sunday morning. To paraphrase another point from my pastor’s sermon, they are taking the Lord at His Word: Eucharist isn’t just eating supper with Jesus — the Lamb is the supper.

My four Ps of Presence have helped me to see that you can’t get more Real than that.

PAUL THOMAS MOORE is a Catholic communicator and singer-songwriter. He and wife Mary Louise attend St. Mary of Lourdes in Germantown Hills, Illinois. He can be reached at paulthomasmoore@hotmail.com.