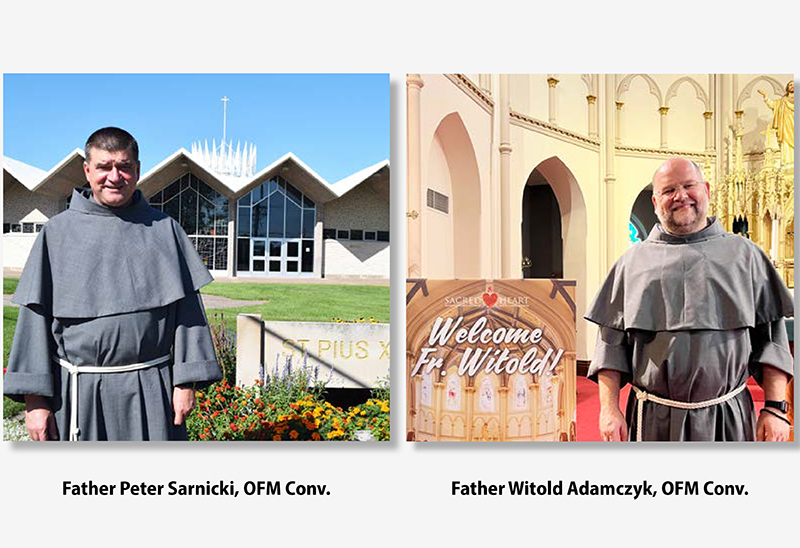 ROCK ISLAND — A new chapter in the rich Catholic history of Rock Island began this month as two Conventual Franciscan priests of the Krakow Province in Poland became pastors of the city’s three parishes.

Both priests, natives of Poland who in recent years have served in the Diocese of Rockford, are residing at St. Pius X rectory, which is now their friary.

“As Franciscans, we are called to live in communities,” said Father Peter, who is province coordinator for the 18 friars from Krakow Province serving throughout the United States. “There is hope that a third friar will join us here in one year.”

Catholics in the community of Rock Island are already receiving their new priests, who arrived on Aug. 1, with open arms.

“People have been warm and welcoming,” said Father Witold (pronounced VEE-told). “I became pastor of communities of believers who care about their parishes. I am a lucky priest.”

“I haven’t had a chance to meet a lot of the parishioners in person,” Father Peter told The Catholic Post on Aug. 10, but generally I’ve met very nice, welcoming people wanting to help and asking me what I need.”

The welcome for Father Witold had to be put on pause when he tested positive for COVID-19 five days after arriving. Fortunately, his symptoms were mild, but he did have to miss the first weekend of Masses at his new parishes. Now fully recovered, Father Witold thanked all for their good wishes, prayers, and assistance.

Both pastors, brought to the diocese at the request of Bishop Louis Tylka, have been formally installed by Father Antonio Dittmer, vicar of the Rock Island Vicariate.

FROM POLAND TO THE U.S.

Rock Island is the latest place of ministry for the Polish Franciscans. Father Peter, who turns 54 on Sunday, was born in Przemysl in southeastern Poland. Father Witold, 49, is from the small town of Glucholazy in southwest Poland. Both spent time in Poland visiting family this summer.

Father Peter’s hometown is on the border with Ukraine and thousands of refugees have passed through its train station. 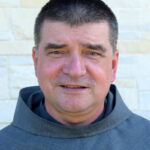 “Polish people are doing a good job, opening up their homes and hearts,” he said. Saying the tension of the war is apparent, he recalled enjoying a family dinner this summer but the thought crossed his mind “here we are eating, drinking, having fun, but on the other side people are afraid and can’t have this comfort.”

Both priests have met, and cite the influence of, St. John Paul II, the Poland native who became the first non-Italian pope in 455 years and shepherded the church from 1978 until his death in 2005.

“We call ourselves the generation of John Paul II because we were fed by his words and example,” said Father Peter. “Because of him we had many priestly vocations in Poland.”

“When he died, I was like ‘I lost my father,’” said Father Witold, who treasures a photo of Pope John Paul II blessing him when he was introduced as a future seminarian. “He became a pope when I was six, so my entire life was this pope. I couldn’t imagine someone else being pope.”

Following their priestly ordinations in Krakow — Father Peter in 1994 and Father Witold in 2001 — both spent time serving at parishes in the neighboring Slovak Republic. Father Peter was pastor of St. Michael the Archangel Parish in the capital city of Bratislava and oversaw construction of a new church, pastoral center, and Franciscan friary. Father Witold served in both Bratislava and Spissky Stvrtok.

Father Peter was the first to arrive in the U.S. In 2004, he became an associate priest at St. Stanislaus Kostka Parish in Rockford. He attended English as a second language classes at Rockford College for two years. In 2005, he became pastor of St. Stanislaus. He has served for the last 11 years at St. Margaret Mary Parish in Algonquin, the largest parish in the Diocese of Rockford, embracing 3,500 families and featuring a significant population with Polish roots. The first nine of those years he was pastor and superior, the last two as superior only.

A BIKER AND A HIKER

Both speak English fluently now and are excited about serving their new flocks and leading them closer to Jesus and one another. 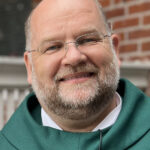 “My rule is the first year you learn, you watch, you do your best serving people in the way they are used to,” said Father Witold.

The people of St. Mary and Sacred Heart, however, may not be used to seeing their pastor on a motorcycle. While in Algonquin, Father Witold was asked to become chaplain of a group of Polish parishioners who rode motorcycles. “I figured I needed a motorcycle,” he said, and with his superior’s permission obtained a Kawasaki Vulcan Voyager.

“Everyone who sees it thinks it’s a Harley, but it’s not,” said Father Witold, who led the bikers on an annual pilgrimage to Holy Hill in Wisconsin in October to thank God for a good riding season without any incidents. He said riding “is the best way for me to get to know your beautiful country.”

Father Peter, meanwhile, enjoys walking, hiking, and driving. He especially looks forward to greeting the children returning to Jordan Catholic School and sharing the famous message of St. John Paul II with them and his new parishioners.

“Do not be afraid — to love Jesus and to spread the good news.”